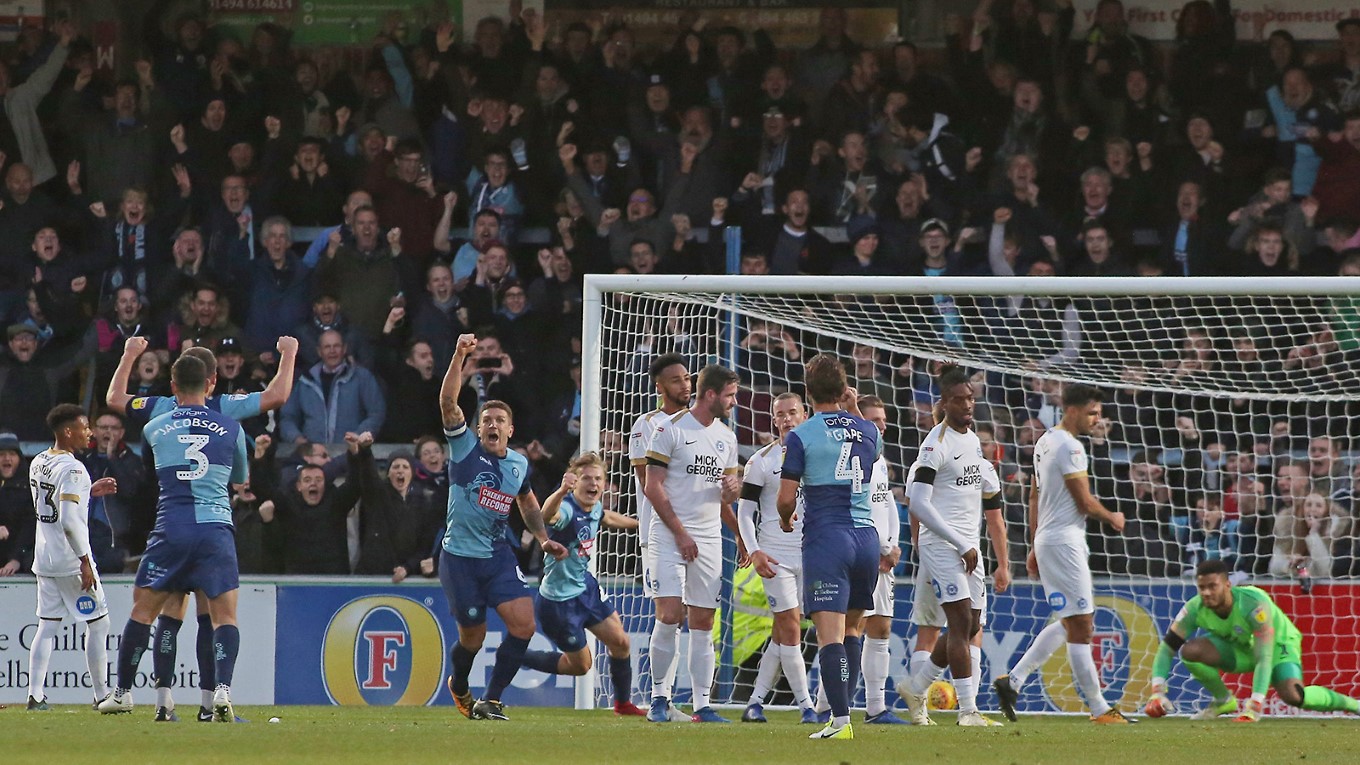 Peterborough United suffered a first Sky Bet League defeat on the road this season as Wycombe Wanderers made it four home wins in a row with a narrow 1-0 success at Adams Park, the three points earned by a deflected free-kick from Bryn Morris.

Louis Reed fired wide from 25-yards after a lively start to the Sky Bet League One fixture at Adams Park. Charles stabbed wide from a short corner moments later as Posh were almost caught out by the quick nature of the set-piece.

Jacobson saw a left-footed free kick from 25-yards pushed around the post by goalkeeper Chapman on 18 minutes after Woodyard had been penalised for a high foot. Toney fired wide of the near post on 24 minutes after linking well with Godden after Ward instigated a bright attack from Steve Evans’ men.

Gape was cautioned on 30 minutes for a bad foul on Tafazolli before Toney’s shot into the ground forced keeper Allsop into his first real action but it was routine for the experienced shot-stopper. Samuel fired over at the other end after finding a bit of space from around 30-yards out.

Allsopp made his first good save of the half on 41 minutes as he denied Rhys Bennett who had turned and fired at goal in a sharp movement after a poor defensive clearance. Cowan-Hall sent a header from a corner over the bar on 54 minutes as the home side continued to probe for the breakthrough.

The clearest chance of the game fell to Godden on 56 minutes after a wonderful pass from Toney but the leading scorer saw his right-footed effort pushed around the post by Allsopp. A good stop from the keeper but Godden will be disappointed he didn’t finish the chance.

Tafazolli was cautioned for a foul on Onyedinma right on the edge of the penalty area on 65 minutes. From the resulting free-kick, the hosts opened the scoring as a low MORRIS free-kick took a wicked deflection via the wall and found the bottom corner.

Chapman clawed a cross away from danger and then took a clattering as the home side tried to build on the goal they had found for themselves from their first real shot on target in the second half. Steve Evans made a change on 72 minutes with Marcus Maddison replacing Dembele.

El-Abd was cautioned for a foul as Jamie Walker replaced Denton as Posh changed their approach. Cummings tested Allsopp with his left-foot on 85 minutes after a Toney flick on. Cummings then flashed a left-foot curler inches wide of the far upright after cutting inside onto his favoured foot.