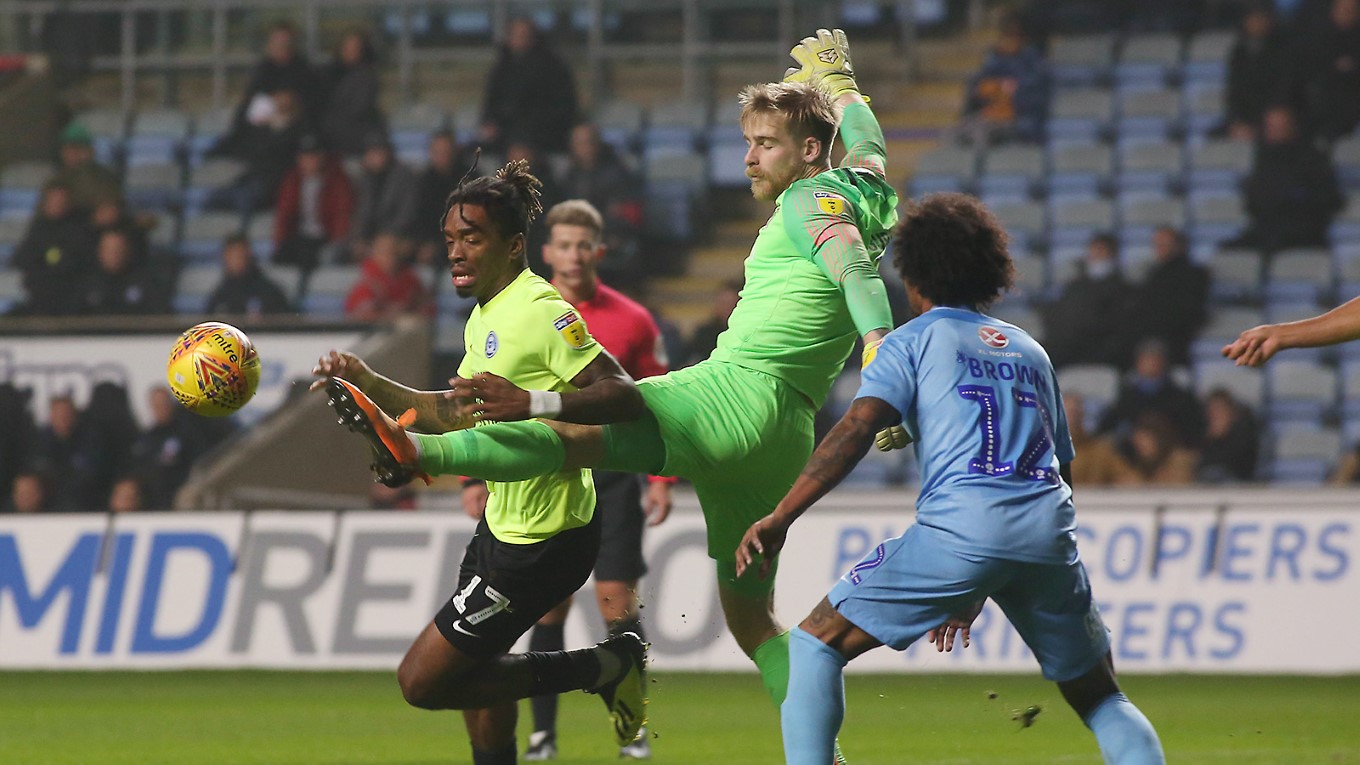 Posh pick up point at the Ricoh Arena on Friday night.

Peterborough United were pegged back in stoppage time at the Ricoh Arena as Ivan Toney’s superb goal was cancelled out by Conor Chaplin following a dramatic finish in Sky Bet League One on Friday evening.

Rhys Bennett saw an early header from a Joe Ward centre go over the crossbar as Steve Evans’ men made a fast start. Ivan Toney then saw a goal-bound effort from 25-yards hit the back of Matt Godden and loop up over the crossbar.

Marcus Maddison tested goalkeeper Burge from long-range on the quarter hour mark, but the keeper was up to the challenge and made a comfortable stop. Conor Chaplin sent a wild effort wide of the target moments later as the Sky Blues caught Posh on the counter attack.

Godden was denied by the body of Burge on 29 minutes after Toney’s cross-shot was well controlled by his strike partner. It was a tight angle for Godden but the keeper did well to smother. Tafazolli was cautioned for catching Clarke-Harris following an aerial duel on 33 minutes.

Maddison was denied by Burge routinely but moments later the keeper made an excellent stop to deny Godden whose low shot on the angle was somehow diverted around the post. From the resulting corner kick, Burge was at it again, thwarting Toney with an instinctive save as he came off his line.

Thomas wasted a good chance to break the deadlock on 48 minutes after benefitting from a poor refereeing decision as the official failed to spot a fairly blatant push on Woodyard, the Coventry winger skipped into the box, but fired well wide of the far post.

Woodyard was cautioned for a foul on 51 minutes as Coventry broke through a gap in the Posh midfield. Chapman was quick from his line to keep out Chaplin on 58 minutes after he had wriggled into the box and away from the already cautioned Woodyard.

Clarke-Harris fired over with his unfavoured right-foot on 64 minutes as City created a decent chance on the break. Toney put an ambitious free-kick over the bar from long-range and then fired wide with his left-foot from a rather improbable angle midway through the second period.

Posh made a change on 70 minutes with Dembele replacing Maddison and moments later Posh should have been ahead as a fine move concluded with a perfect cross from Denton onto the head of Toney but he planted his header wide from 10-yards.

Denton was at it again with decent service on 78 minutes but again it was met by a header that didn’t trouble the keeper, O’Hara’s header going wide of the target. Posh got their noses in front on 89 minutes as a poor back pass was intercepted by Cummings, his back heel picked out TONEY and he did the rest.

However, the lead didn’t last long, less than 60 seconds in fact as a long ball wasn’t dealt with and CHAPLIN was well placed to convert from close-range. Posh came close to retaking the lead deep into stoppage time from a long Ward throw but both sides were forced to settle for a point.