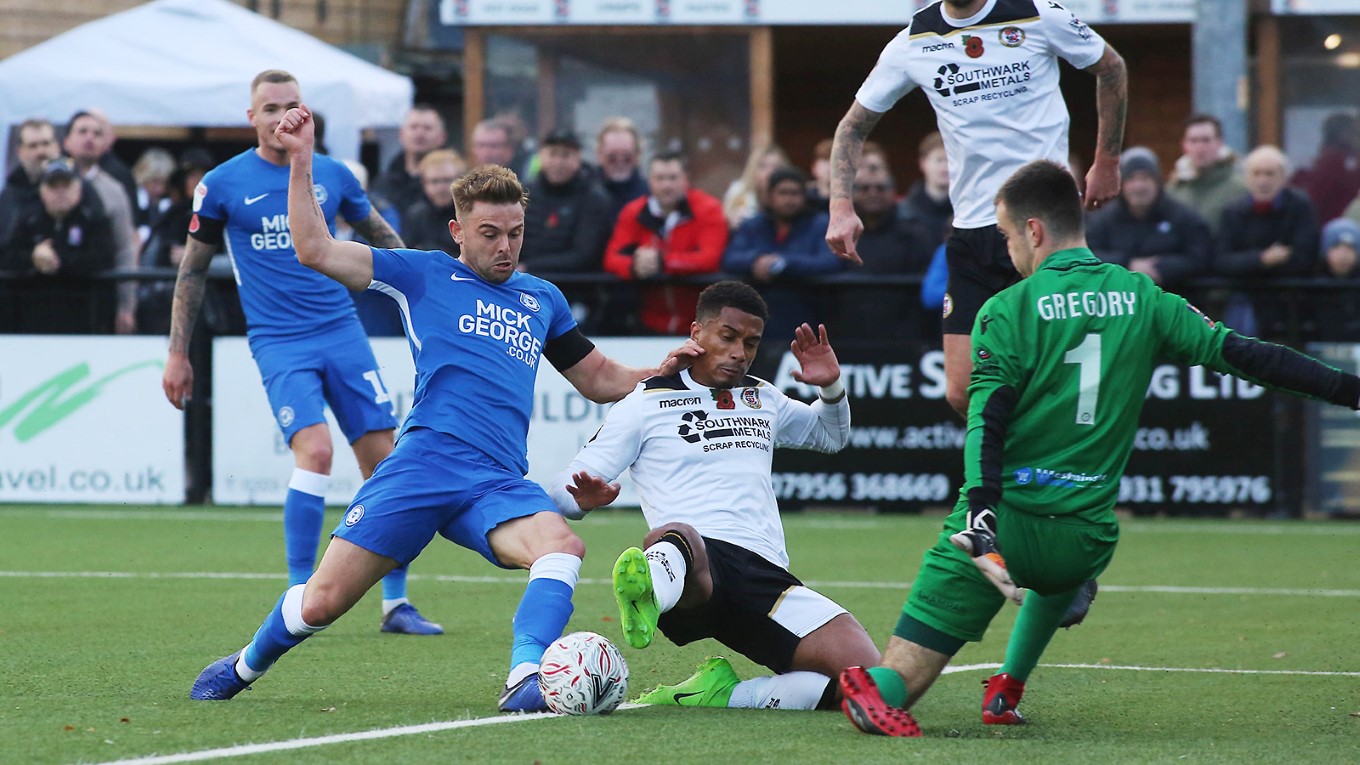 Match report for Bromley vs Peterborough United on 10 Nov 18

Peterborough United eased into the second round of the Emirates FA Cup with a 3-1 victory at National League side Bromley with Matt Godden taking his tally to 13 goals in all competitions with a brace in either half.

Steve Evans’ men made a positive start to the cup tie with several half chances in the opening five minutes before George Cooper curled a free-kick from 25-yards over the crossbar after he was chopped down on the edge of the area.

Godden headed straight at Gregory moments later after a whipped cross into the box before Cummings glanced a header wide. Aaron Chapman made his first save on 20 minutes as he tipped a free-kick wide of the far post after a good delivery into the box.

Jason Naismith did superbly well to clear an attempt from Bugiel off the line on 29 minutes after a cross to the back post caused a bit of panic before Ward curled wide at the other end. Cummings was denied by a smart Gregory stop on 37 minutes after a long ball forward dissected the home side’s back line.

The deadlock was broken on 40 minutes as a raking free-kick to the back post was headed back into the empty net by experienced centre back Roger JOHNSON. The home side were reduced to 10-men on the stroke of half-time as Raymond was shown a straight red card for lashing out at Cooper by the touchline. Johnson was cautioned for dissent moments later.

Posh levelled in first half stoppage time as a cross into the box by Woodyard was controlled by Matt GODDEN on his chest and he lashed home on the volley past Gregory and into the back of the net. Bromley were forced into a change on 51 minutes as Bugiel limped out of the action with a muscle injury, Scott Quigley his replacement.

Posh got their noses in front on 56 minutes as a wonderful centre from Jason Naismith was converted on the penalty spot by GODDEN for his second goal of the game and 13th in all competitions for the season.

Gregory produced a fine stop on 64 minutes to keep out a fierce Naismith drive as Posh pushed for a third goal against the 10 men. Cummings saw a shot from 25-yards whistle just past the near upright after the on-loan striker cut inside onto his favoured left-foot.

Ward rattled the crossbar from long-range on 68 minutes as Posh continued to dominate possession with the numerical advantage. O’Hara saw an effort clear the crossbar after good hold up play by Cummings as the cup tie moved into the final 10 minutes.

Posh did make it 3-1 on 85 minutes as a quick counter attack which was started a fine tackle from the goal-scorer was finished coolly by WARD as he ran onto a Denton pass to coolly slot the ball past the keeper. Sutherland tested Chapman two minutes from time but the keeper made a routine stop diving to his left.