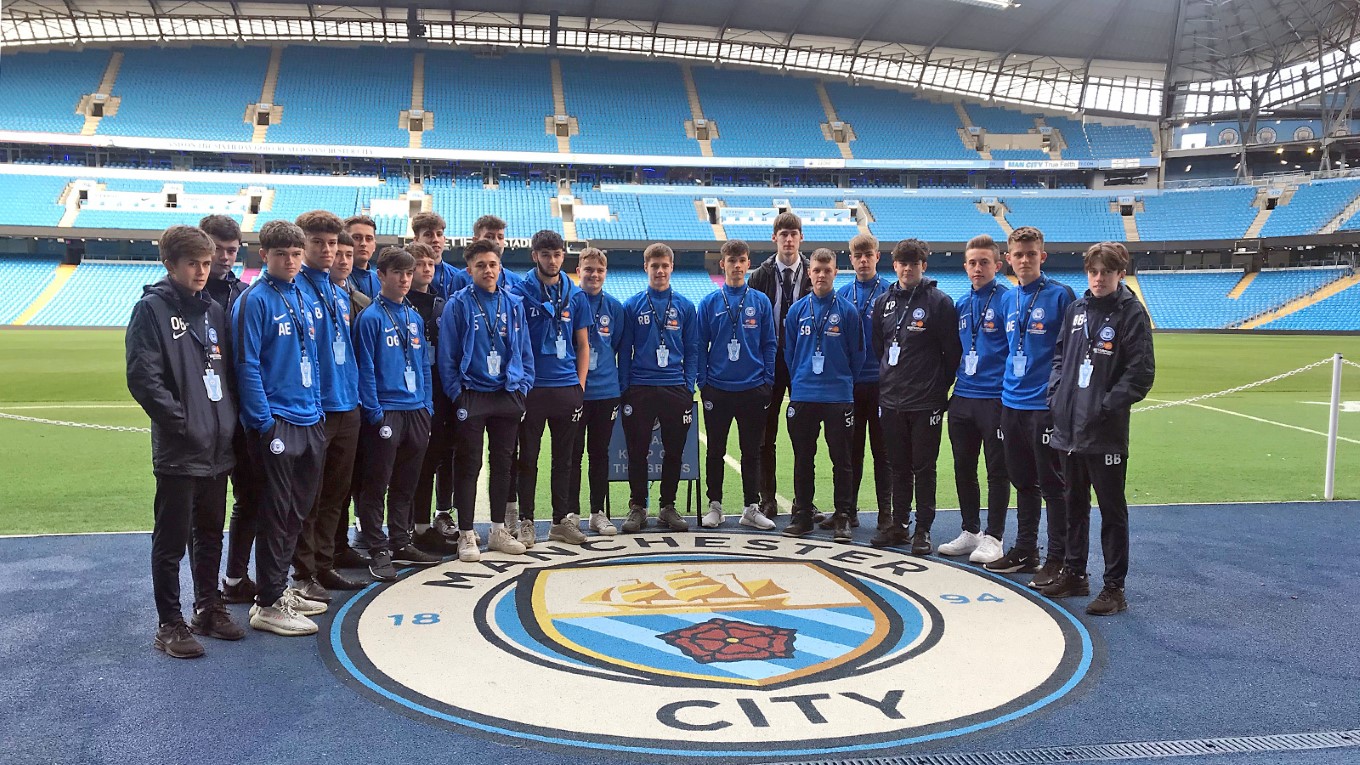 On Wednesday 31st October, the Peterborough United Sports Scholarship travelled to Manchester to play against Man City at the Etihad Campus. Prior to the game, the players had a tour of the Etihad Stadium which included visiting the home changing room and having a chance to sit in the same seats that David Silva, Kevin De Bruyne and co. sit on a match day.

From here the players were able to walk down the tunnel and out to the pitch before sitting in the same dugouts that Pep Guardiola and his coaching staff fill during a game. Alongside these standout experiences, players visited the VIP Lounge, the Media Room and the Club Store.

From the stadium, the Scholarship moved across to the Etihad Campus prior to their game vs Man City. The Etihad Campus, Man City's £200m facility, is currently the home of the academy, the women's team and also where the first team train.

Playing on a blue pitch, Posh started the game positively, moving the ball well and creating a lot of chances of which a couple fell to Bayly. Despite the positive start, Grypicz was called into action and made a superb double save to keep the game at 0-0; however, just before half time Man City went 1-0 up through a rebounded effort to punish Posh's failed attempts.

After regrouping at half time, Posh again started strongly looking to make amends. After more missed chances, Posh finally made the break through with Bayly latching onto a cutback from Palmer with a first time finish across the goal. Following the goal, Man City worked their way back into the game with Posh still looking a real threat and creating chances to take the lead through Saywell, Cook, Palmer and Bayly. Despite Posh's dominance in the second half, Man City scored a late breakaway goal to make it 2-1 with Posh unable to score an equaliser in the dying moments.

Despite the result, Posh came away from a fantastic experience with a lot of positives to take on-board and would like to thank Man City and Simon Hardman for making the day happen.

Man of the Match: Baker

Additionally, with the trials being held at the Mick George Training Academy, the players experienced playing alongside the first team and the youth team. On the day, 44 players were split into four teams and each took part in a 20-minute warm up activity led by academy coaches before taking part in round robin style games. In attendance was first-team defender Colin Daniel, who congratulated the trialists after the games followed by taking a photo with all the players.

Further trials will be held on Wednesday 2nd January, Friday 31st May and Friday 2nd August. The sports scholarship programme will provide players the opportunity to train daily with FA and UEFA qualified coaches and play on a weekly basis in an EFL league exclusively for professional clubs, whilst earning A-Levels or BTEC Level 3 in Sport. You can still play for your grassroots club in addition to the sports scholarship. To sign up, please visit https://officialsoccerschools.co.uk/peterboroughunited/peterborough-united-boys-sport-scholarship-open-trial.html and for more information please feel free to contact scholarship@theposh.com.