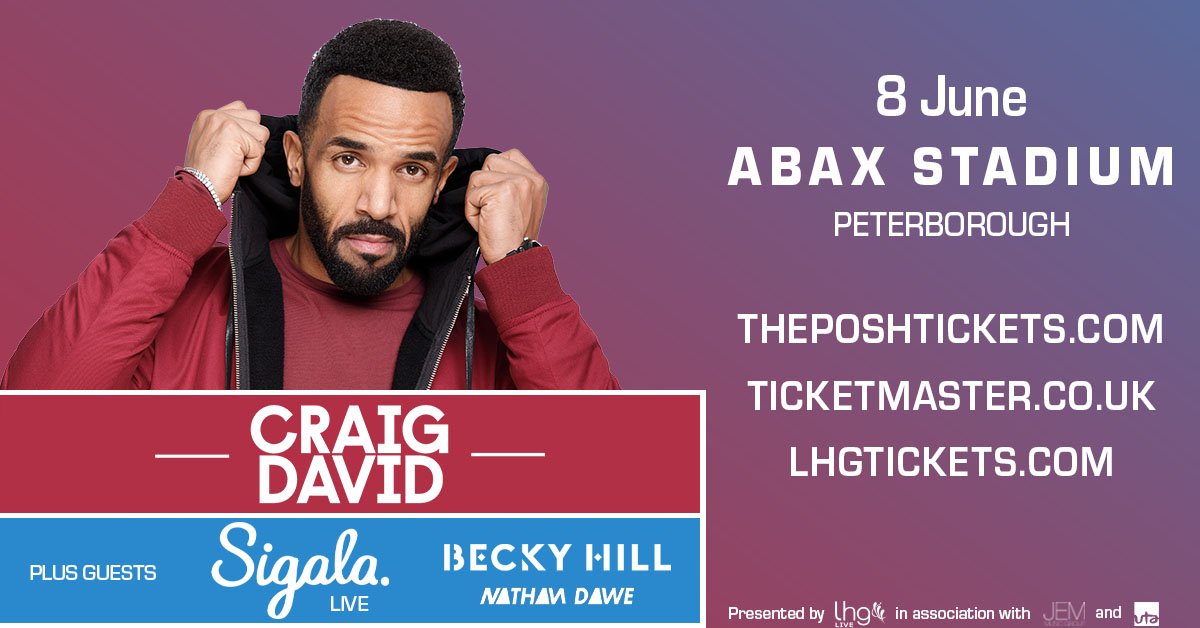 Craig David to perform at The ABAX Stadium

Global superstar Craig David and his full live band will perform at ABAX Stadium, Peterborough on Saturday 8 June 2019, bringing an arsenal of hits and his signature dynamic performance to his only full concert in Cambridgeshire in 2019.

He will be joined by international DJ Sigala who will be bringing a full live band set, following a smash hit performance from chart-topping artist and songwriter Becky Hill. And getting the crowd into the party will be the rising star DJ Nathan Dawe.

In the wake of the massive success of his 2018 tour, ABAX Stadium will form part of a limited number of concerts across the UK in the summer of 2019, bringing Craig’s warmth and a phenomenal live show that includes the all the hit singles such as 7 Days, Walking Away, When the Bassline Drops, Nothing Like This, Heartline and I Know You.

Craig David said, “I’m really looking forward to bringing my show and band to Peterborough in the summer. It’s going to be a blast; I’ve no doubt my fans will join me in making this a big night. I’m a huge fan of Sigala who will be spinning some serious tunes on the decks, and Becky Hill has the most incredible voice, so I’m looking forward to having them both as my very special guests. DJ and producer Nathan Dawe is on the up – and I am happy to invite him to open. We know the fans in Peterborough like to PARTY so bring it on, cannot wait to see you all!”

Craig David has sold 15 million albums worldwide, has had many Brit and Grammy nominations and is a multiple Ivor Novello and Mobo Award winner amongst others. His last two albums were both critically acclaimed and massive hits – with Following My Intuition at Number One and The Time Is Now reaching Number Two. It is 18 years since his debut album, the critically acclaimed Born To Do It, was at Number One, and he continues to amass fans across the globe.

Sigala is a DJ and record producer who has enjoyed huge chart success internationally, with six singles in the Top 10 UK charts, including the huge Number One hit Easy Love. The songwriter, whose real name is Bruce Fielder, has worked with some of the most exciting artists in the world, collaborating with Sean Paul/Fuse ODG/Kent Jones, DJ Fresh, Kato, Digital Farm Animals, Ella Eyre, John Newman and Nile Rodgers and of course Craig David. Six platinum singles, eight gold singles, four million UK sales and eight million worldwide not to mention 800 million Spotify streams have propelled him to the most played British male on UK commercial radio. Sigala will be bringing a dynamic full live band set including these hits to Peterborough ahead of Craig David’s performance, promising to have the crowds fully raring to go. Having worked with Craig David on Aint Giving Up Sigala is the perfect choice of very special guest.

Singer-songwriter Becky Hill is known for her soul-stirring, powerful vocals on tracks like False Alarm with Matoma as well as her UK Number One platinum selling single Gecko (Overdrive) with Oliver Heldens and certified Gold top ten hit with Wilkinson on Afterglow. Earlier this year she released captivating new single Sunrise In The East, her first for new home Polydor Records. Hill has crafted a bona-fide solo career for herself and with a new album on the horizon, whilst Back & Forth with MK and Jonas Blue is shaping up to be one of the biggest songs of 2018, it is fair to say that Becky is making waves.

Multi-genre DJ and producer Nathan Dawe has had an incredibly impressive 2018, with sold out December shows in Birmingham and London, succeeding his fully packed summer which included his yearly residencies in Zante and Ayia Napa, shows in world top clubs such as Ushuaia Ibiza, all through to his new release Cheatin on Atlantic Records, which has amassed nearly three million streams and entered the Official Top 100 Charts.

Tickets will be available from:

Children under the age of 16 must be accompanied by an adult, under 5s go free.

This is an outdoor concert.