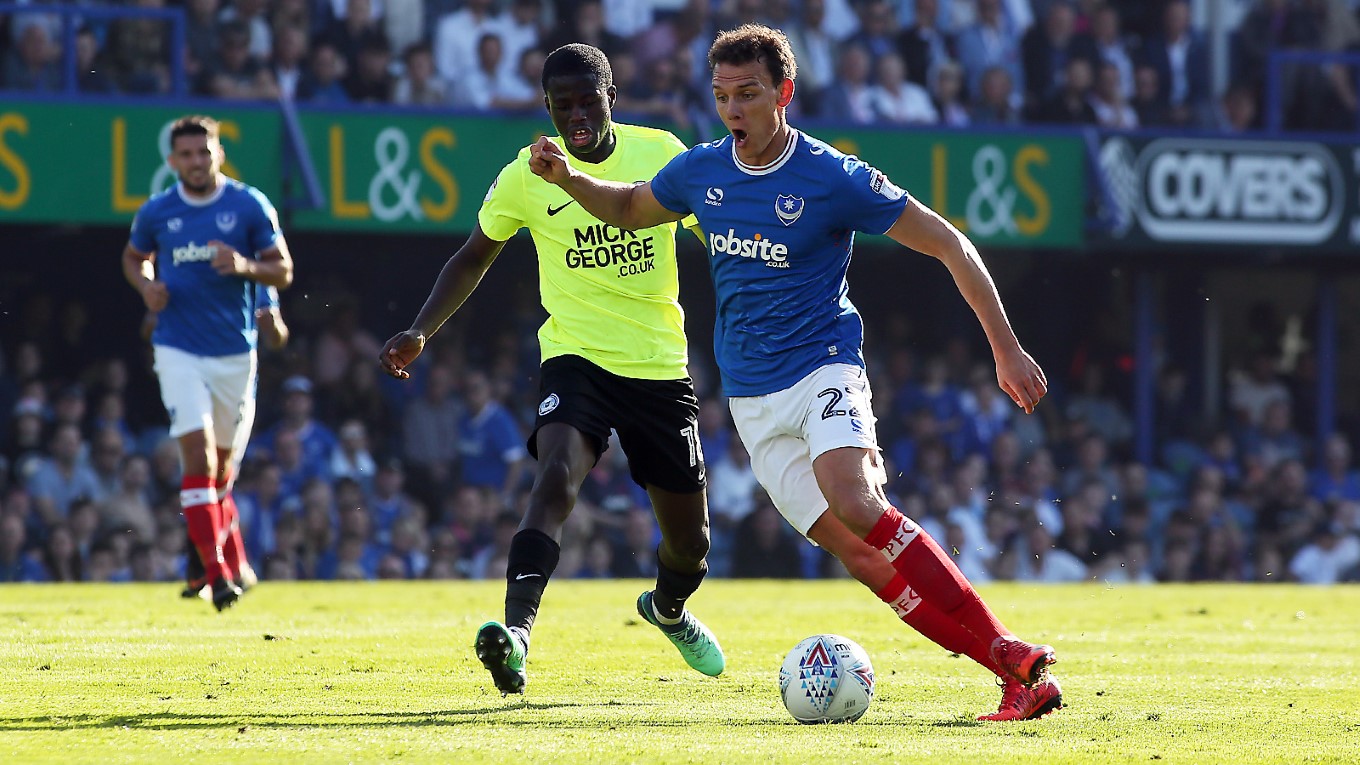 Match report for Portsmouth vs Peterborough United on 05 May 18

Jack Marriott wins the Golden Boot on a day that Posh slip to 2-0 defeat to Portsmouth.

Peterborough United suffered a 2-0 defeat to Portsmouth on the final day of the Sky Bet League One campaign to finish ninth in the table, Brett Pitman scoring twice to condemn Steve Evans’ men to the loss at Fratton Park.

Ben Close had the first effort of the game but his left-footed strike cleared the crossbar from 25-yards. Brett Pitman had his first chance to close the gap on Jack Marriott in the race for the League One Golden Boot on seven minutes, but after cutting inside Shephard, he saw his tame shot saved by the legs of Jonathan Bond.

Bass made his first save albeit at the second attempt to keep out a well struck Marcus Maddison free-kick from long-range on 10 minutes after Cooper was barged into by Burgess. The deadlock was broken on 12 minutes, a corner kick was met by the stooping Brett PITMAN who moved four goals behind Marriott in the goal-scoring charts in League One as a result.

Maddison saw a long-range effort clear the crossbar on 17 minutes after he was picked out in a bit of space in midfield. Bond was brave to dash from his line to smother at the feet of Pitman on 19 minutes as the front man again exposed some space in behind the Posh back-line.

Pitman had another go on 22 minutes, his side-foot lob clearing the bar from just outside of the penalty area. The home side doubled the lead on 25 minutes and it was PITMAN again, this time from a yard to tap home Lowe’s shot across goal.

Maddison saw a low effort roll just past the far post on 28 minutes after linking well with Cooper on the right hand side of the Posh midfield. Pitman squandered a fine chance to complete his hat-trick on 34 minutes after Clarke used his power and muscle to protect an aerial ball in front of goalkeeper Bond – the former Bournemouth man firing over on the volley.

Pitman was denied a hat-trick by a fine stop from Bond on 42 minutes after yet again being afforded acres of room to take a touch and have a strike. One minute of added time was indicated by the fourth official before referee Mr Busby brought an end to a first half that the home side were in control of for large periods.

Posh made a double change at the break with Danny Lloyd and Joe Ward replacing Kanu and Cooper in attack. Thompson was rightly cautioned for a late challenge on Edwards on 53 minutes and on another day he could have easily received red for a physical lunge on the Welshman.

Hughes saw a looping header gathered by Bass before Pompey introduced Matt Kennedy from the bench to replace Naismith. Bond was well placed to claim a header from Pitman on 76 minutes as the game entered the final quarter. Pitman then saw a curling effort go wide of the far post after Evans nodded a loose ball into his path.

Bass was called upon to deny substitute Lloyd on 85 minutes as the former Stockport man cut inside onto his favoured left-foot on the edge of the box.