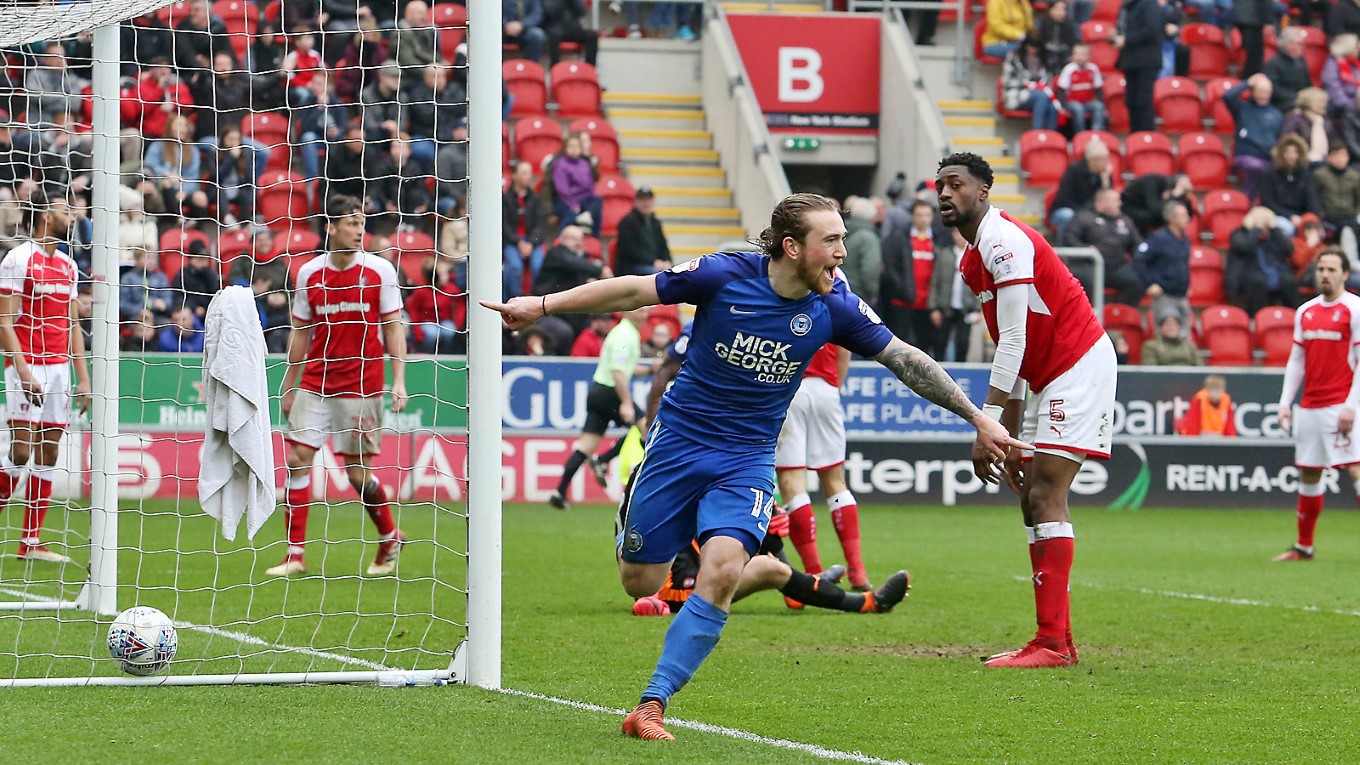 Jack Marriott scored a stoppage time leveller to earn Posh a point and turn Good Friday into an excellent Friday.

The former Luton Town man notched his 30th goal of the campaign in the 98th minute following good work from substitute Junior Morias to earn Posh a point ahead of the local derby with Northampton Town on Easter Monday.

Goalkeeper Conor O’Malley produced a fine save on seven minute to deny Anthony Forde as the midfielder raced clean through following a flick from Smith, the Irishman smothering himself superbly to keep the scores level.

Towell fired over from an acute angle moments later as the game started at a frenetic pace. Posh had appeals for a spot-kick turned down on 14 minutes when Marriott went down under a challenge from Ajayi before O’Malley was called upon again to claw away a cross-shot from Mattock.

Ball slid in at the back post to divert a bouncing Palmer cross over the bar on 16 minutes as the Millers continued to threaten. Ajayi sent a looping header from a Newell free-kick over the bar moments later after Forrester had been adjudged to have felled his man.

Goalkeeper Rodak was called upon on 26 minutes to keep out a powerful Tafazolli header at the back post following a deep Maddison corner. Marriott was denied by the legs of Rodak after a sharp shot on the turn on 39 minutes after excellent approach play from Maddison and Cooper.

Posh made a change on 51 minutes with Junior Morias replacing George Cooper. Forde saw an effort from 30-yards clear the crossbar on 55 minutes before Steve Evans made a second change with Joe Ward replacing Lloyd.

Tafazolli was cautioned on 58 minutes for a foul by the touchline and moments later, Newell fired a volley wide of the target. Lavery sent a shot from 10-yards wide of the target on 62 minutes as the hosts continued to be in charge of the second half.

The deadlock was broken on 68 minutes as a free-kick wasn’t cleared and substitute LAVERY fired into the net from around six yards. Tafazolli limped out of the action on 72 minutes with Lewis Freestone his replacement.

O’Malley produced a fine stop to tip a Smith header over the bar on 74 minutes with Smith hooking a volley over from the resulting set-piece. Marriott was superbly denied by Rodak moments later after the front man wriggled into a shooting position 25-yards from goal.

Newell fired over after good work from Smith in a tight area at the other end as the game moved into the final 10 minutes. Six minutes of added time was signalled and Marriott saw a shot go wide from close-range, but in truth it was a very difficult opportunity with so many players around him.

Deep into stoppage time, Posh rescued a point, Morias pulling the ball back for Jack MARRIOTT and he fired low through the keeper and into the back of the net for his 30th goal of the season to earn Posh a precious point.