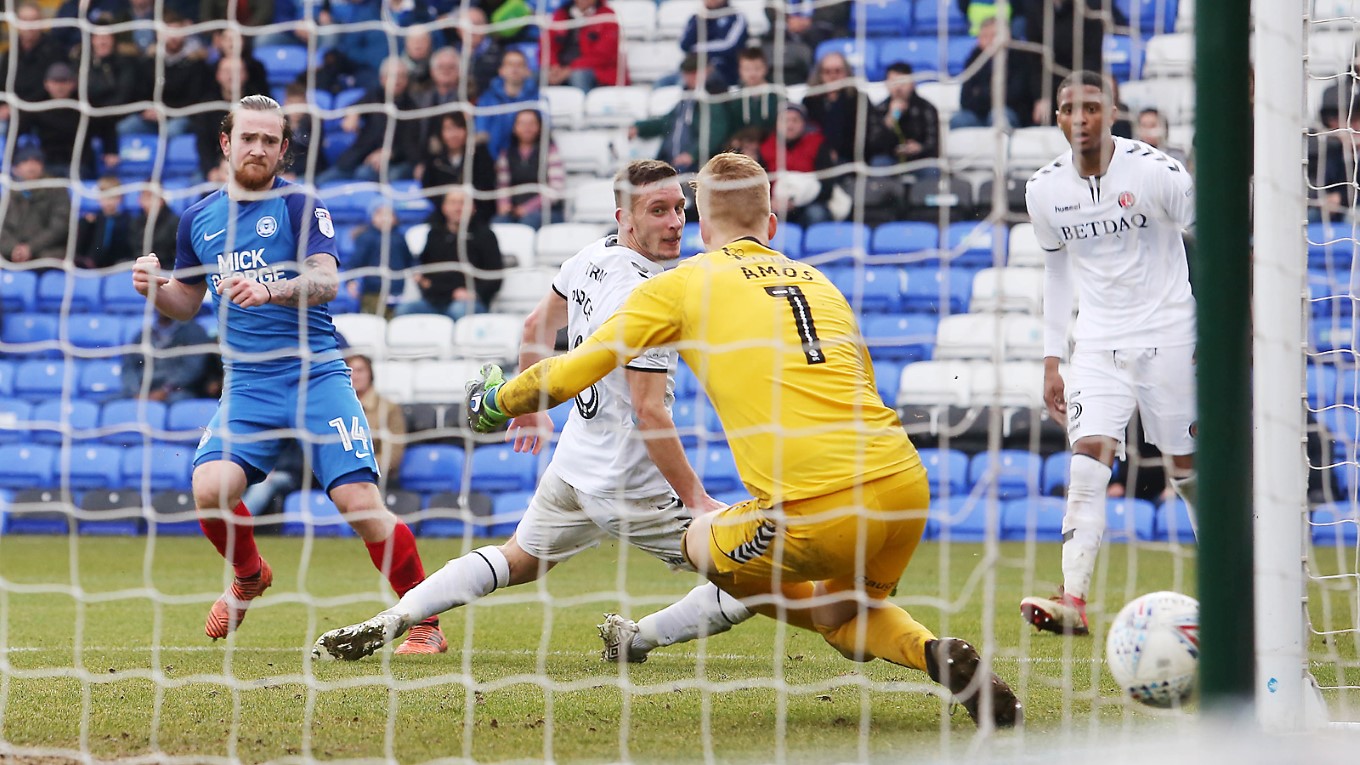 Posh defeat Charlton Athletic 4-1 in front of over 6,300 supporters at the ABAX Stadium.

Peterborough United recorded a 4-1 victory over Charlton Athletic in Steve Evans’ first game in charge with Jack Marriott taking his season tally to 27 in all competitions and 21 in League One.

Marriott scored twice in the second half with Marcus Maddison and Andrew Hughes also on target in a comfortable victory over a play-off rival at the ABAX Stadium.

Jack Baldwin guided a header from a Marcus Maddison free-kick over the crossbar on six minutes after the Posh number 11 was fouled late midway through the Charlton half. Bond gathered a low Magennis effort at the second attempt by the near post moments later after cutting inside from the left.

Bond was well placed to deny Forster-Caskey on the quarter-hour mark as he ghosted into the box following a flick-on from a long throw. Midfielder Chris Forrester fired over the top from 25-yards after a neat turn 25-yards from goal.

On-loan Bogle showed his ability again on 28 minutes, collecting a pass from Marriott before driving into the box, his left-foot shot was powerful and cracked against the near post. Forrester saw a deflected shot gathered by former Posh goalkeeper Ben Amos a minute later after more good hold up play from Bogle.

Kaikai tested Bond with a powerful effort from a tight angle on 31 minutes which the Posh shot-stopper did well to hold. Maddison curled a 20-yard free-kick wide of the target with his left-foot on 38 minutes after he had been felled after a forceful run.

Baldwin was cautioned for a rash challenge five minutes before the break and Solly followed him into the book for dissent. On 44 minutes, Posh got their noses in front as Andrew HUGHES side-footed home with his right-foot at the back post after a clipped cross from Joe Ward.

Charlton were awarded a penalty kick on 54 minutes as Shephard was adjudged to have nudged his man in the back, after initially waving the protests away, referee Mr Huxtable pointed to the spot. Magennis stepped up and struck the spot-kick well but it went wide of the target.

On 59 minutes, Posh had a penalty of their own, a wonderful run from Ward down the left and he then had the presence of mind to pick out Maddison on the near side, he ran at pace at the defender and was tripped inside the box. This time the referee had no hesitation in pointing for a penalty and MADDISON coolly sent the keeper the wrong way to double the Posh lead.

Charlton used all three of their substitutions before the 70 minute mark with Zyro, Ajose and Reeves all introduced. Fosu-Henry missed a glorious chance to halve the deficit on 68 minutes, but he planted his unmarked header wide of the target.

Manager Steve Evans made his first change just before the 70 minute mark, introducing Michael Doughty for Ward. On 73 minutes, the visitors pulled a goal back, an in-swinging cross from the right was glanced home at the near post by substitute ZYRO.

Danny Lloyd replaced Bogle moments later as the game entered the final quarter. On 82 minutes, Posh restored their two-goal cushion, Hughes picking out Lloyd down the left, his pull back was controlled by MARRIOTT and the former Luton man fired low past the keeper from close-range.

Moments later it was 4-1 and what a ball from substitute Jermaine Anderson, curling it around the back four where MARRIOTT was there to stoop home and head home his second goal of the game.