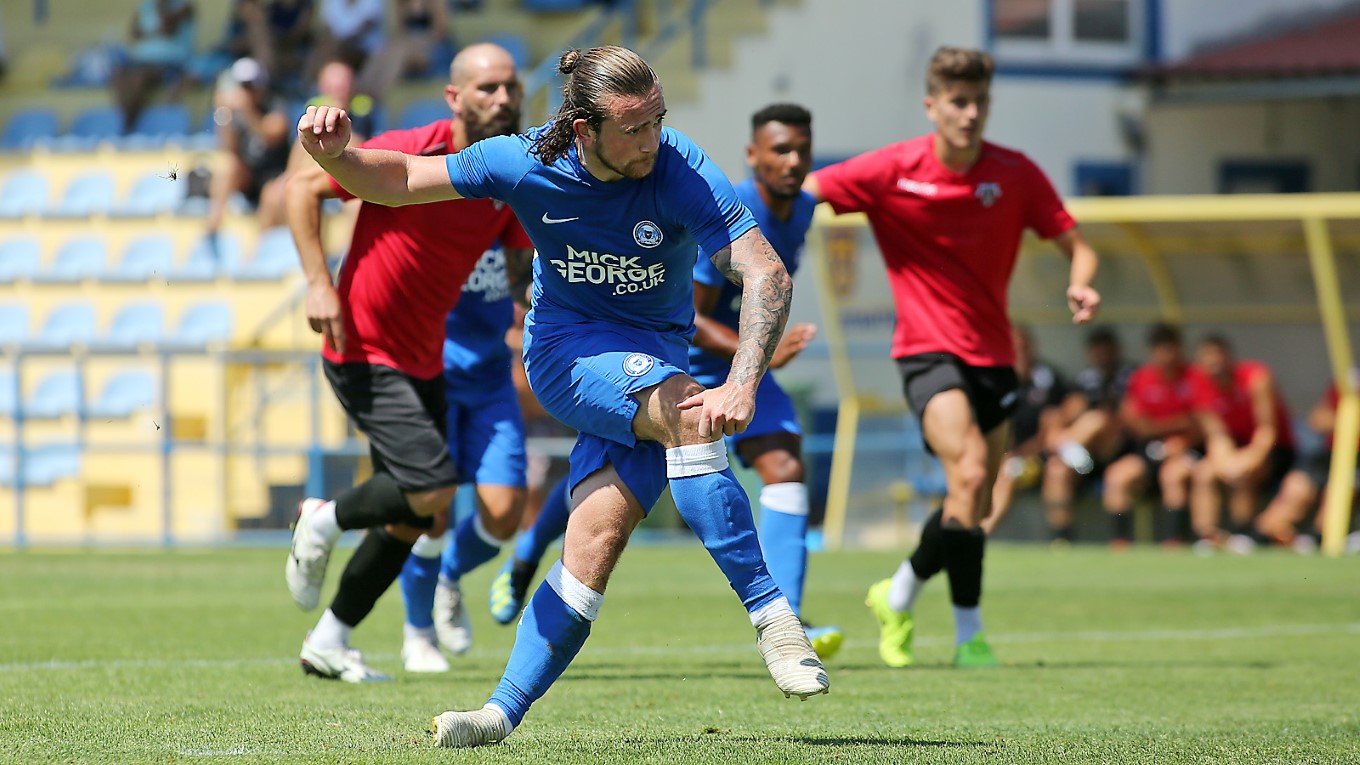 Match report for Louletano vs Peterborough United on 21 Jul 18

Posh continued their preparations for the new campaign with a 5-2 win on Saturday morning.

Peterborough United recorded a 5-2 victory against Portuguese side Louletano in a competitive pre-season friendly with Jack Marriott marking his return to the starting line-up with a brace of goals in the first half.

Matty Godden, Louis Reed and George Cooper were also on target and there were plenty of other opportunities for Posh in front of goal that were squandered to make the score-line more emphatic.

Josh Yorwerth made a fine block on 11 minutes as the home side made progress into the Posh box from a wide area. The deadlock was broken on 17 minutes as Jack MARRIOTT found the bottom corner with a free-kick after O’Hara was felled on the edge of the area.

The lead lasted less than a minute though as a long ball forward was latched onto by the Louletano striker, who lobbed O’Malley with the ball finding the back of the net via the inside of the post.

Posh re-took the lead on 26 minutes as a low Ward cross from the right was sliced by the central defender into the path of Matty GODDEN who side-footed home at the back post.

Marriott saw a left-footed effort blocked after racing onto a cross-field Godden pass as Posh pushed for a third goal. Marriott nearly got on the end of a good O’Hara cross after a clever pass into the channel from Freestone on 39 minutes.

On 43 minutes, Posh extended their advantage, excellent pressing and then a fine pass from O’Hara picked out Marriott who was upended in the box. MARRIOTT stepped up and coolly sent the keeper the wrong way from the spot for his second goal of the game.

Posh came close to extending the lead three minutes into the second half as Godden’s cross was met by Tyler Denton, but his left-foot volley cracked the post before rebounding to safety.

Marriott fired wide of the near post from 20-yards on 51 minutes after cutting inside onto his right-foot after O’Hara showed good pace and power to burst from midfield.

Louletano pulled a goal back on 56 minutes as a huge throw into the box was misjudged and headed into the back of the Posh net. Marriott wasn’t far away from guiding a fine Freestone cross into the far corner moments later, his run got him in front of the defender, but it was a tight angle to score from.

Steve Evans made mass changes on the hour mark and the new front two of Cummings and Stevens combined to give a chance to the latter, but his shot went over the top.

Chapman was well placed to make a routine stop moments later as the hosts made good progress down the left. Cummings was denied by the substitute keeper on 65 minutes after Daniel’s volley fell into his path.

A fine pass from Reed picked out Naismith midway through the half and the Scotsman took a good first touch, but his left foot shot didn’t curl and went wide of the target.

Stevens was denied by the keeper after intercepting a poor defensive clearance, but in truth he was wrestled to the ground long before the effort and in a more competitive game, there is no doubt a red card would have been issued to the defender.

Stevens fired wide five minutes later after a fine bit of skill and pass from the lively Dembele. Posh finally made it 4-2 in the final 10 minutes as REED intercepted a clearance and coolly slotted the ball past the keeper.

It was 5-2 three minutes later, COOPER firing home with his left-foot after unselfish play from Cummings.