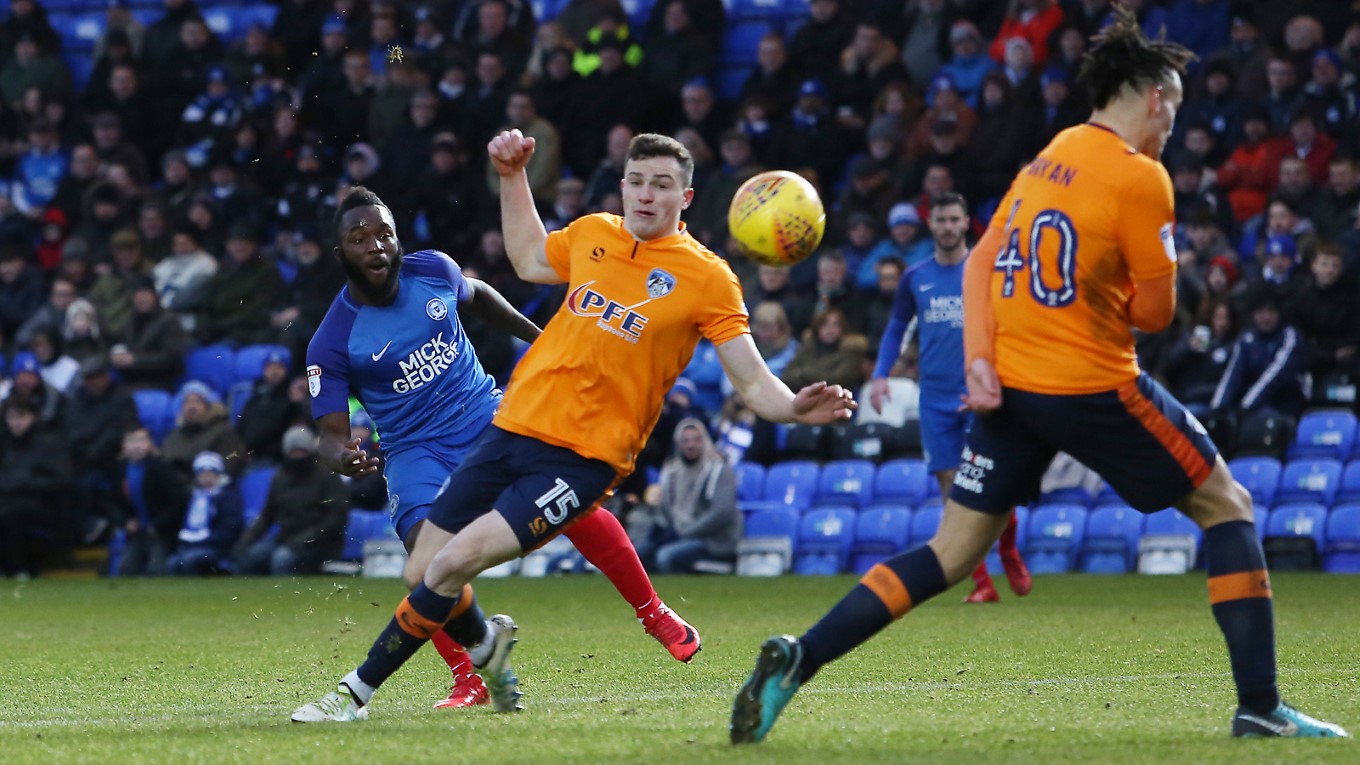 At the start of the season, Junior Morias was flying, but a ruptured quad muscle sustained at Boundary Park ruled him out of action for close to five months – he came up against that same opposition at the ABAX Stadium and scored the crucial first goal in a 3-0 win for Peterborough United.

Morias described the day as ‘emotional’ in the post-match press conference and you can understand why. He netted the first goal and ran across to celebrate close to physiotherapist Jon Chatfield who helped him with his rehabilitation. George Cooper netted on his debut and a late penalty from Jack Marriott – his 24th goal of the campaign, completed the scoring.

Goalkeeper Jonathan Bond made a routine stop to deny Craig Davies on two minutes after a bright start to the game from Oldham. A Maddison free-kick took a nick off a defender moments later with goalkeeper Placide tipping the ball over for a corner kick.

Placide made a decent save to deny top scorer Marriott on 18 minutes after he was played through by Maddison before Oldham had Byrne booked and Posh saw Morias go into the book after a bit of a confrontation following a foul by Maddison.

Oldham were forced into a change on 23 minutes with skipper Gerrard replaced by George Edmundson. Maddison saw a shot blocked after side-stepping two defenders on the half hour mark as Posh pressed for the breakthrough against a stubborn Oldham side.

Bond was called upon to beat away a fierce drive from Byrne moments later after some shaky Posh defending. Dummigan fired wide of the far post after bursting into the box on 37 minutes as the visitors found a gap.

Maddison flicked a Marriott cross wide of the near post on the stroke of half-time as Posh tried to end the half in control. Edmundson was booked for a late challenge on Morias as the game moved into stoppage time at the end of the first half.

The deadlock was broken on 53 minutes and it was a great moment for Junior MORIAS, he collected a pass and curled a fine effort into the bottom corner past the despairing dive of Placide. A goal against the side in which he sustained his long-term injury.

Marriott then saw an acrobatic volley somehow blocked by substitute Edmundson after the defender had initially sliced a teasing Maddison centre. Posh made a change on the hour mark with Joe Ward replacing Lloyd.

Oldham were reduced to 10-men on 67 minutes as Edmundson was shown a second yellow card for yanking the shirt of Marriott. The visitors struck the base of the post through substitute Gardner on 73 minutes as Posh began to get nervy at the back.

Grant McCann replaced Maddison with George Cooper on 75 minutes with the new signing taking his place on the left of midfield. Idris Kanu replaced goalscorer Morias as the game entered the final 10 minutes.

Posh doubled their lead on 83 minutes and it was made by Irishman Chris Forrester with a wonderful reverse pass to substitute COOPER who took a touch and then rifled home for a debut goal past the stranded Placide.

Posh made it 3-0 on 90 minutes, MARRIOTT was felled by Byran in the box and the top scorer stepped up to coolly send the keeper the wrong way from the spot for his 24th goal of an incredible campaign. He nearly had another moments later, his fizzing shot went just past the far upright from 20-yards.