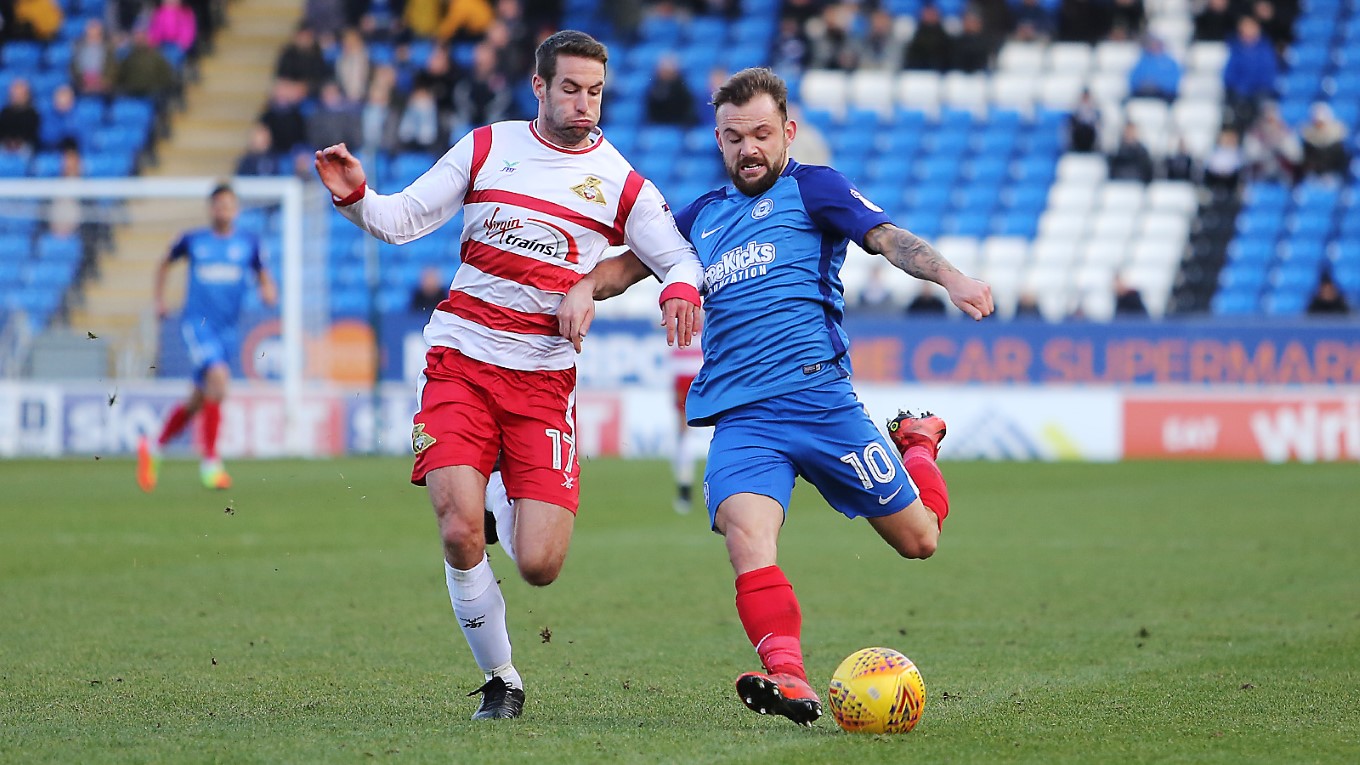 A goal deep into stoppage time from Ben Whiteman earned Doncaster Rovers a 1-1 draw at the ABAX Stadium as a first half strike from Danny Lloyd was cancelled out by Darren Ferguson’s men right at the death.

Steven Taylor produced a fine block to deny Tommy Rowe on five minutes as the visitors created the first real opportunity of the game. Rowe saw another effort deflected into the grateful arms of Bond via the heel of his team-mate May on nine minutes.

The deadlock was broken on 13 minutes, a well flighted Maddison free-kick was nodded back across goal by Tafazolli and there was the foreverposh Player of the Month for December, Danny LLOYD to divert the ball into the back of the net via the inside of the post with an well struck shot from six-yards.

Liam Mandeville curled a free-kick inches wide at the other end from 25-yards after Doughty was penalised for a late foul. Mandeville fired over from long-range after finding a bit of space on 22 minutes in a dangerous position between the lines.

Maddison saw a left-foot curler from 30-yards drift wide of the far post on 25 minutes after Marriott did well to put off the defender in an aerial duel. Maddison was cautioned for diving on 33 minutes – he appeared to be clattered by goalkeeper Lawlor but the referee was quick to give the decision in Doncaster’s favour.

Maddison saw a left-footed free-kick from a wide angle drift just past the upright after he was felled by the back-tracking Mason following an excellent Forrester pass. Lloyd was denied by the legs of Lawlor on 43 minutes after cutting inside onto his right-foot after he was picked out delightfully by Doughty.

On the stroke of half-time, Bond did well to gather a Marquis effort after Grant had been dispossessed in a dangerous area. Tafazolli appeared to meet an in-swinging corner from Maddison at good pace, but it must have come off his shoulder as the ball trickled wide of the target.

Forrester cracked the outside of the post with a superb volley on 53 minutes, the Irishman connecting expertly with the volley and Lawlor was clutching at thin air only to be saved by the woodwork. Penny was cautioned by the referee for a foul on 56 minutes and Joe Wright followed him into the book moments later for Doncaster.

Grant McCann made his first change just after the hour mark with Leo Da Silva Lopes replacing Doughty in midfield. Marriott saw a half volley deflect over the bar moments later from 25-yards. Mason was then yellow carded for bringing down Maddison who then overhit the resulting free-kick.

Ben Whiteman floated a free-kick over the bar on 82 minutes after Grant was adjudged to have felled his man on the edge of the box. Junior Morias replaced Maddison on 86 minutes as Posh made a second change.

Bond produced a fine stop to deny a Marquis header after a glorious Rowe cross and then May somehow contrived to miss from closer in after another drilled cross as the game entered five minutes of added time. Deep into that added time, Doncaster levelled the scores as WHITEMAN was in the right place to drill through the legs of Bond after a deflection fell kindly in the six-yard box.