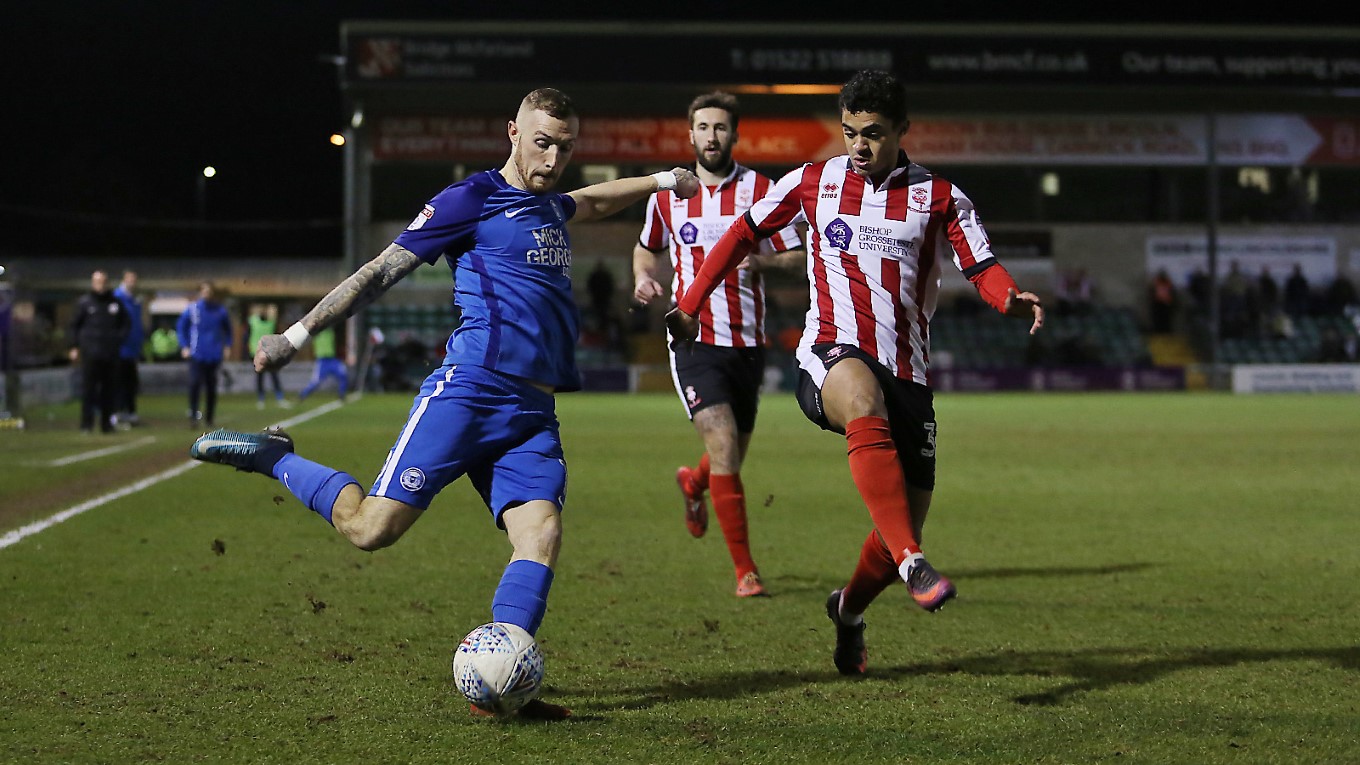 The Imps are into the semi-finals after a 4-2 victory over Posh at Sincil Bank.

Lincoln City moved into the semi-finals of the Checkatrade Trophy at the expense of Peterborough United at Sincil Bank following a pulsating cup-tie which swung one way and then another in front of over 6,500 passionate supporters.

An own goal and Danny Lloyd screamer had twice given Posh the lead, but the Imps kept going and got their reward late on when former Posh winger Harry Anderson scored at the near post and then a breakaway goal sealed their passage in stoppage time.

Lee Frecklington was denied by Jonathan Bond inside the opening three minutes as Posh, who lost Jack Marriott in the warm-up, tried to contain the buoyant Imps. Farman made a decent stop at the other end to deny a low Maddison effort from long-range as this cup tie started at a lightening pace.

Lloyd saw a deflected effort gathered by Farman on nine minutes after cutting inside onto his dangerous left-foot. Waterfall was denied from point blank range by Bond from a well-flighted Imps corner kick on 12 minutes before Baldwin produced a fine block to deny Anderson.

The deadlock was broken on 15 minutes, a wonderful cross at pace from Morias was sliced into his own goal by his near post by EARDLEY. Rowe whipped a shot inches past the far post moments later after cutting inside onto his left-foot 20-yards from goal.

Green got in behind Baldwin on the half hour mark, but from a tight angle, the striker rolled his effort out for a throw in on the far side. Bond did well to catch a curling Waterfall effort as it came through a crowd of bodies on 33 minutes.

Anderson flashed a cross-shot wide of the far post on 40 minutes after Tafazolli had initially did brilliantly to deny the pacy Green getting through on goal. On 43 minutes, the hosts got themselves level and to be fair, give credit where it is due, it was a wonderful finish from ROWE who cut inside onto his left-foot and curled a fine effort into the top corner past Bond.

Ward fired wide moments after the break after a patient Posh build-up as McCann’s men, kicking towards the magnificent supporters, made a bright start to the second half. On 50 minutes, Posh got themselves in front for the second time in the tie and what a strike it was too, Danny LLOYD with a wonderful left-foot curler into the corner from 25-yards.

Morias had the ball in the back of the net moments later with a fine strike of his own, but the referee had already blown for a free-kick in Lincoln’s favour. The lead didn’t last long though, a cross into the box from the left was allowed to reach the powerful presence of RHEAD at the back post and he bundled the ball over the line to draw the host’s level.

Goalkeeper Farman made a fine stop to deny a powerful Maddison effort before the keeper tipped a deep corner by the Posh number 11 around the post. The hosts made the first change of the game on 65 minutes with Long replacing Frecklington in midfield. Ollie Palmer was introduced moments later with Rhead the man replaced.

A combination of Grant on the line or a superb stop from Bond denied a crisp effort from Eardley on 67 minutes before Lloyd fired wide at the other end. On 70 minutes, Posh made a double change with Idris Kanu and Leo Da Silva Lopes brought on by McCann. Lloyd saw a trickly shot blocked before Forrester ballooned a loose ball over as we entered the final 17 minutes.

Lloyd curled a free-kick over the top from 25-yards on 74 minutes after Forrester was upended by Waterfall. Bond caught a looping Watergall header moments later after finding some space at the back post. Maddison then saw a long-range effort clear the bar with keeper Farman appearing to be confused by the swerve.

Green had the ball in the net on 85 minutes after rounding Bond, but the referee spotted a shove on Baldwin in the build-up. In the first of four minutes added time, the Imps won the game as former Posh winger Harry ANDERSON volleyed home via the underside of the crossbar at the near post.

The Imps made sure of the game in the final minute of stoppage time on the counter attack as GREEN finally timed his run right and he slotted past the advancing Bond to give the score-line a more flattering look.