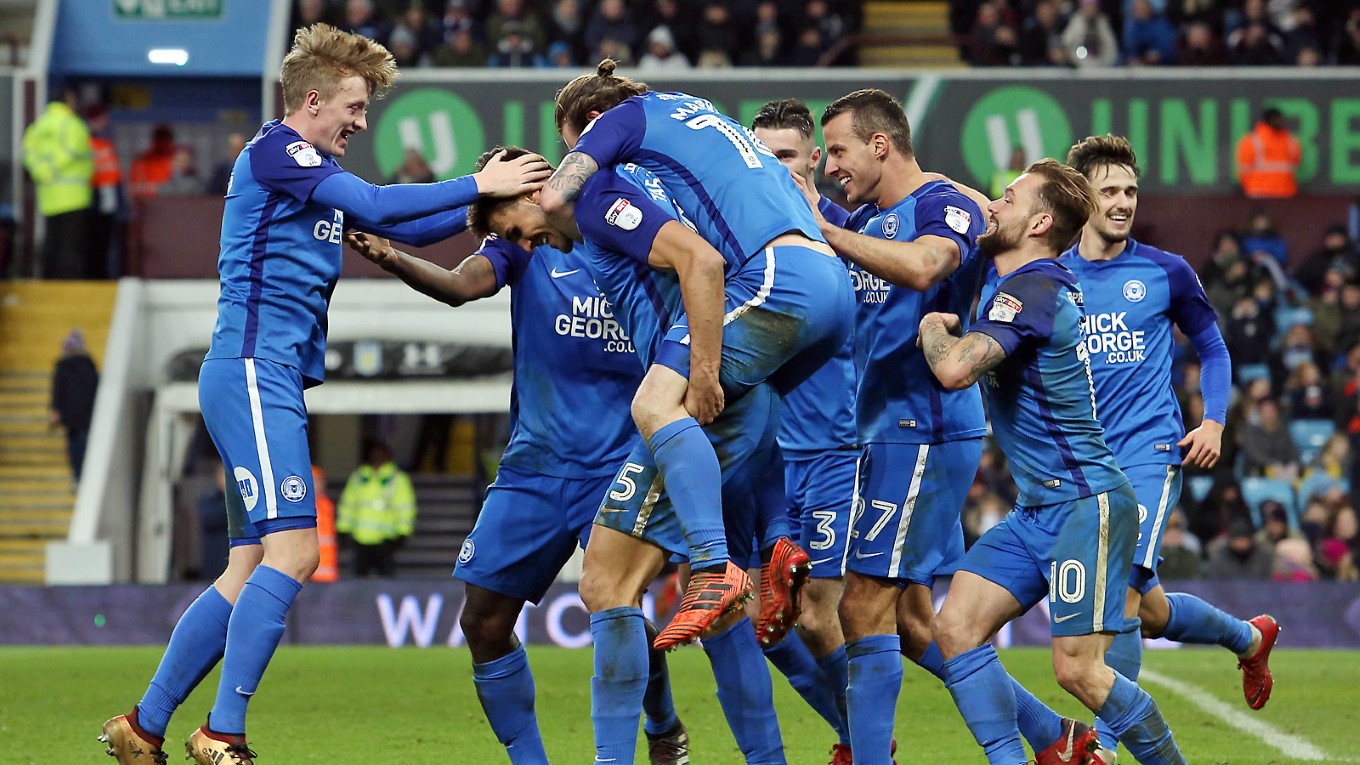 Superb Posh seal fourth round berth in the Emirates FA Cup with a 3-1 victory at Championship side Aston Villa.

Peterborough United produced a superb performance at Villa Park to come from behind to deservedly beat Sky Bet Championship side Aston Villa 3-1 in front of over 21,000 supporters make no mistake, this was no fluke – Grant McCann’s men were first class from minute one to the final moments.

After falling behind to a Davis strike inside the opening 10 minutes, it would have been easy for lesser sides to go under, but Posh stuck to their game plan, playing some excellent football with Chris Forrester at the heart of it, and found the back of the net three times in the second period to secure a fourth round berth.

It was a nervy start for Grant McCann’s men with goalkeeper Jonathan Bond called upon to make a fine stop inside the opening 30 seconds, tipping an effort from Andre Green over the crossbar. At the other end, good work from Forrester and Hughes created a half-chance for Lloyd, but leaning back, he skied his effort.

The deadlock was broken on seven minutes as a De Laet cross was allowed to reach the powerful DAVIS who saw his shot on the turn find the back of the net via the body of Bond. Goalkeeper Steer produced a fine stop at the other end as a miss-placed pass was seized upon by Maddison, the winger’s curler pushed clear by the keeper.

O’Hare saw a cheeky back-heel gathered by Bond on the quarter-hour mark. Posh were a whisker away from levelling on 24 minutes as a Hughes cross was met by a towering Shephard header at the back post but it looped onto the crossbar with Danny Lloyd firing the rebound on the volley wide of the far post from 10-yards.

Marriott was denied by the legs of Steer on 36 minutes after he was played into the left-channel by Lloyd after a probing spell from Posh. Da Silva Lopes was cautioned for a foul off the ball on 39 minutes. Lloyd planted a header straight into the arms of goalkeeper Steer from a teasing Shephard first time cross moments later.

On the stroke of half-time, Posh carved out another opportunity for Marriott but again keeper Steer came to Villa’s rescue, denying the front man with his body. Steve Bruce made a change at the break with Henri Lansbury replacing Green. Marriott immediately tested Villa keeper Steer moments after the interval from 20-yards but it was routine for the shot-stopper.

Marriott was a whisker away from making it 1-1 on 51 minutes after a driving run and pass from Forrester, the striker firing inches over the upright. Bond did well to deny Green by his near post and then after a lightening Posh break, Lloyd was inches away from converting a low Maddison cross after he had linked well with Da Silva Lopes.

Lansbury tested Bond from long-range with the keeper doing well to gather at the second attempt. Bond did well to deny Davis and then Hourihane as Villa began to find some spaces. Posh made a change on 70 minutes with Junior Morias replacing the hard-working Da Silva Lopes.

Hourihane was inches away from making it 2-0 from 25-yards, inches past the upright before Bond did brilliantly to deny the onrushing O’Hare. Posh drew themselves level on 75 minutes and it was no more than they deserved, Forrester’s dink to the back post was volleyed across goal by Lloyd and MARRIOTT was there to head home from close-range.

Bjarnason then cracked the underside of the crossbar with a guided volley before Villa made a double change as Jack Grealish and Rushian Hepburn-Murphy were introduced. Lloyd saw a defleted free-kick tipped over by Steer. On 82 minutes, Posh got themselves in front, a wonderful corner from Maddison was met by centre back TAFAZOLLI and his powerful header took a deflection before nestling in the back of the net. Three minutes of added time was indicated by the fourth official as Posh tried to cling on.

Deep into stoppage time, Posh wrapped up the game to secure a 3-1 victory with Maddison squaring for MARRIOTT who took his tally to 23 for the season by finishing well from close-range in front of the 5,000 Posh fans.