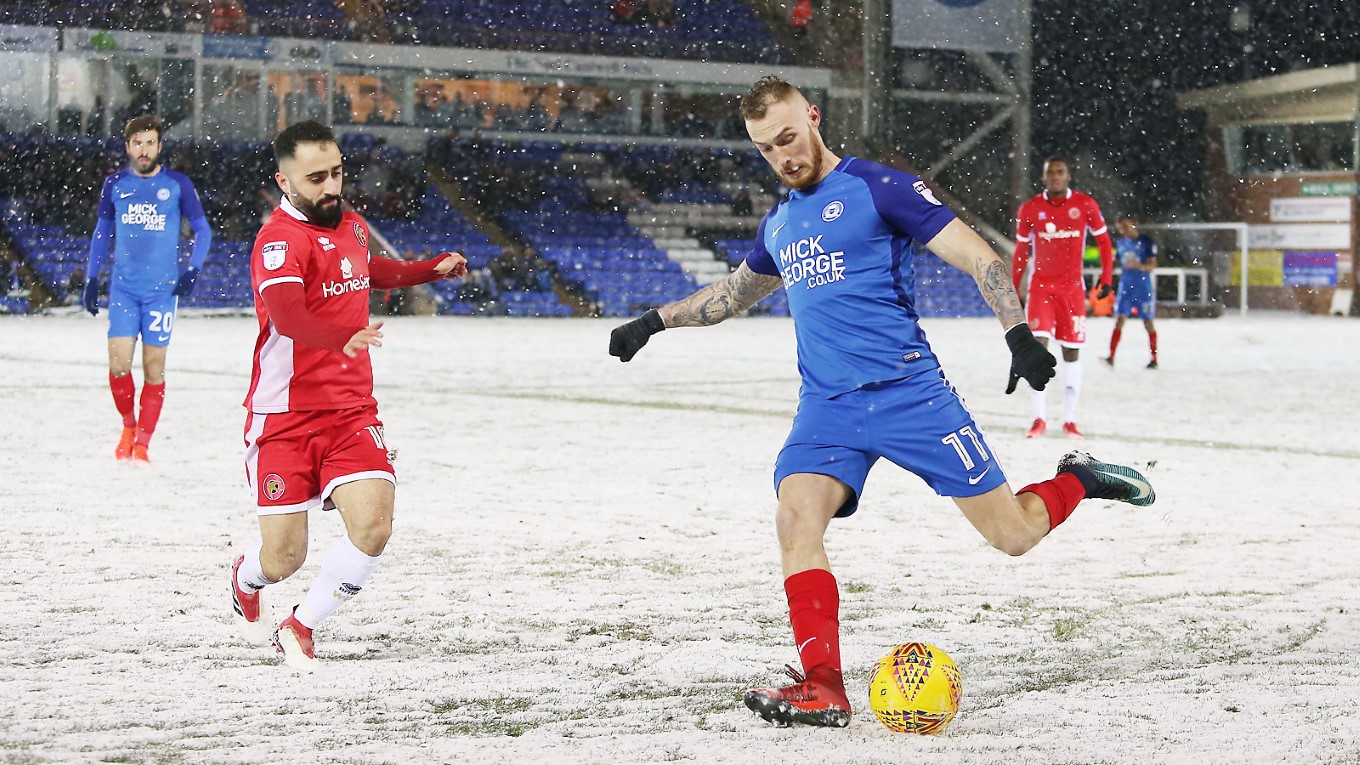 Match report for Peterborough United vs Walsall on 27 Feb 18

David Oldfield made it two wins from two as caretaker manager of Peterborough United with almost eight years between the two stints.

Peterborough United moved to within three points of the play-off positions with a hard fought 2-1 victory over Walsall at the ABAX Stadium in an incredible game of football played in arctic conditions with heavy snowfall throughout the contest.

Posh fell behind, missed a penalty and got back on terms through Omar Bogle’s first goal for the club before Steven Taylor got the final touch to a Jack Baldwin effort to secure all three points. Walsall hit the post while Posh squandered a number of opportunities with the ground staff, office staff, stewards and players all coming together to ensure the game concluded.

It was a nightmare start for Posh as they fell behind inside the opening eight minutes, NGOY rounding Bond and slotting the ball into an empty net with his right-foot. Posh were awarded a spot-kick on 10 minutes as Marriott was fouled by Fitzwater. The defender was only shown a yellow card and Maddison saw the spot-kick saved by the legs of keeper Roberts.

Doughty saw a powerful volley just clear the crossbar on 20 minutes after Forrester had kept alive a half-cleared Maddison corner. Oztumer fired wide moments later after a poor clearance from Baldwin. Bond did well to gather a low Morris shot as the snow continued to fall at the ABAX Stadium.

Maddison clipped a left-foot shot over the bar from a tight angle after Bogle pulled the ball back into his path as the game reached the half hour mark. Dobson was cautioned for diving in the box on 37 minutes after bursting into the box.

Posh drew themselves level on 38 minutes as a Maddison pass somehow found BOGLE and the on-loan front man buried the chance with his left-foot. There was one minute of added time but nothing occurred during that period apart from snow from the sky.

Maddison saw a low effort comfortably saved moments after the interval after cutting inside from the left. Posh got themselves ahead for the first time in the game on 52 minutes, Maddison did well to get to the by-line, his cross found Baldwinand his shot went through a crowd of bodies and into the back of the net via a slight touch from TAYLOR.

Doughty was cautioned for a foul on the hour mark but Oztumer curled the free-kick well wide. Posh made their first change on 65 minutes with Junior Morias replacing Bogle who got Posh back on level terms in the first period.

Maddison picked out Hughes moments later from a dead ball situation but he headed over the top. Substitute Morias fired wide after a flick from Maddison on 69 minutes as Posh tried to find a third goal. Bond superbly denied Kouhyar by pushing a low shot around the post on 74 minutes before Leahy hits the bar from an Oztumer corner.

Ward saw a shot blocked by the legs of Devlin at the other end after forcing his way into the penalty area. The referee brought a halt to play on 80 minutes to get the lines cleared with Posh players, staff, groundstaff and stewards clearing the lines.

Maddison flashed a shot wide moments after the re-start from 25-yards with the keeper scrambling. Marriott saw a shot trickle wide of the far post moments later after he was afforded a bit of space in the box.

In stoppage time, Roberts produced a superb stop to deny Marriott and then the ball was somehow cleared off the line by Dobson.