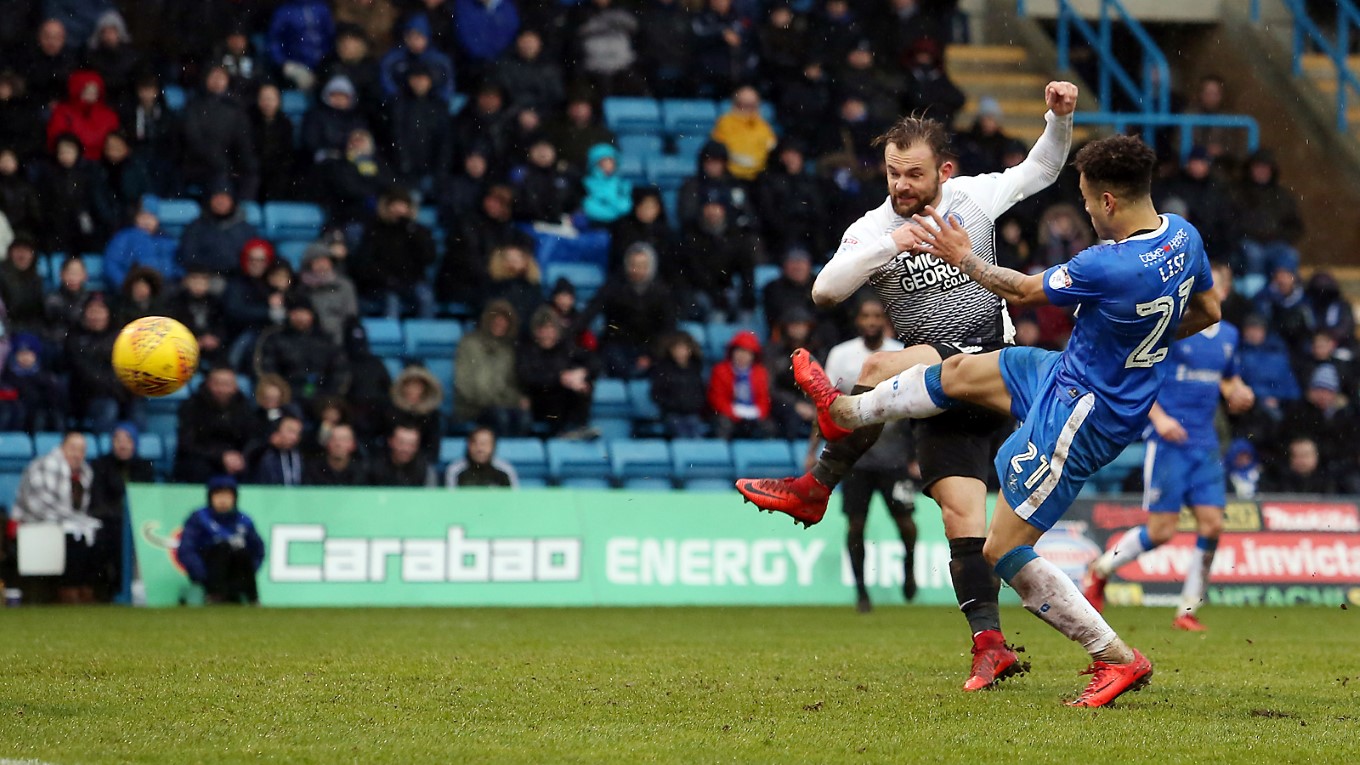 Match report for Gillingham vs Peterborough United on 10 Feb 18

Posh pick up a point at Priestfield but leave frustrated after last gasp equaliser from the hosts.

Peterborough United conceded a stoppage time equaliser as Gillingham earned a 1-1 draw at a wet and windy Priestfield with defender Max Ehmer firing the leveller with less than two minutes of the added time remaining.

It was harsh on Posh who were the better side for long periods and had taken the lead through Danny Lloyd’s 12th goal of the campaign. Posh face Scunthorpe United on Tuesday night at the ABAX Stadium.

Jack Marriott tested goalkeeper Holy inside the opening minute with a low strike that the Gills shot-stopper did well to hold. Holy was called upon again on six minutes to deny a snap-shot from Michael Doughty from 20-yards.

Shephard sliced a shot over the bar after being picked out by Lloyd on 11 minutes as Posh broke at good pace. Grant was cautioned by the referee for his first foul of the game moments later for bringing down the pacy Parker. A Ward snap-shot at the other end went well wide of the far post.

Lloyd had the ball in the back of the net with a clever volley on 22 minutes but the offside flag was raised and it was the correct decision. Holy denied Marriott with his legs on 42 minutes after finding a bit of space in the left channel.

Byrne was cautioned 10 seconds into the second period for a foul on Ward. Reilly followed him into the book for a foul on Grant.  Bogle showed good close control to wriggle past two challenges on 51 minutes, but his toe-poked left-foot finish went wide.

Shephard saw a cross-shot well defended by Ehmer before Marriott fired the rebound over after Grant won the ball in midfield. Parker headed over at the near post from a Garmston cross on the hour mark after being afforded a bit of time and space.

Grant fired over after racing onto a good Marriott flick on 64 minutes, good run but wrong man in that position. Junior Morias replaced Bogle in the first Grant McCann change on 66 minutes and moments later Posh were ahead as LLOYD fired home through the keepers legs with his left-foot from seven yards after the hosts failed to clear.

The hosts thought they had levelled on 70 minutes as Parker appeared to bundle a rebound over the line after Bond had initially parried his close-range header but the assistant referee didn’t give the goal and he was well placed.

Joe Ward was replaced by Andrew Hughes as the contest entered the final 10 minutes of normal time. Chris Forrester replaced the goalscorer Lloyd on 88 minutes. Bond did well to punch an inswinging corner clear before Marriott squandered a chance on the counter attack, declining a pass and then firing wide.

In stoppage time, the Gills grabbed a late equaliser as centre back EHMER suddenly found space in the box and he powered a low shot through Bond and into the back of the net.