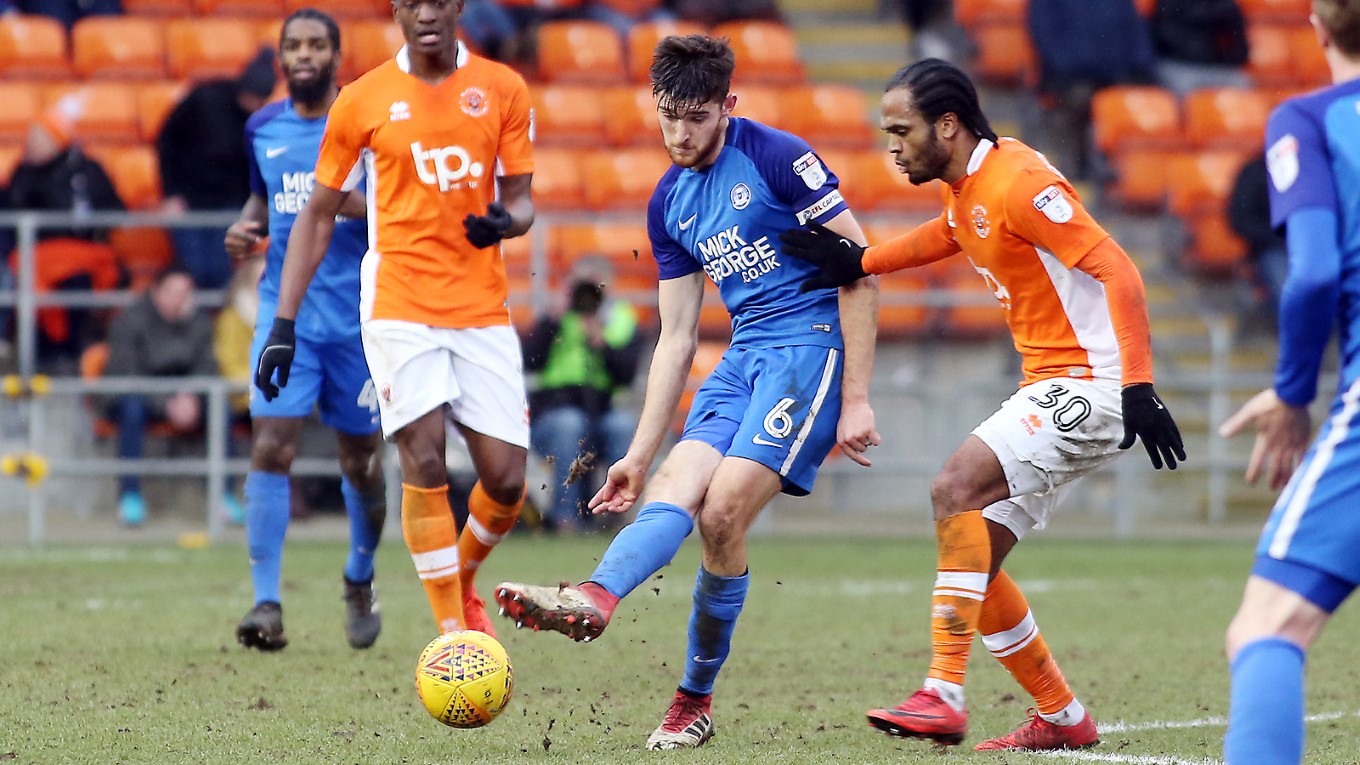 Match report for Blackpool vs Peterborough United on 18 Feb 18

Grant McCann was left frustrated as his side were forced to settle for a 1-1 draw at Bloomfield Road.

Peterborough United recorded their third successive draw in Sky Bet League One, but will point to a controversial Blackpool equaliser on an awful pitch at Bloomfield Road as Nathan Deflounso appeared to bundle home the equaliser with his arm in front of 301 Posh fans, who deserve enormous credit for their backing.

Michael Doughty was a whisker away from a spectacular opening goal inside the opening three minutes but his volley from 25-yards took a slight deflection and went wide of the target. Lumley was called upon to deny Doughty on nine minutes after the former QPR man found some space around 30-yards from goal.

Longstaff saw a low effort comfortably gathered by a watchful Bond on the quarter hour mark after the midfielder managed to evade a couple of tackles. Doughty saw a shot blocked and then Ryan fired well wide at the other end.

The deadlock was broken on 22 minutes and it was a 25th goal of the season for Jack MARRIOTT who powered home a header at the near post after a wonderful cross from Maddison on the half volley. Forrester fired well wide of the target on 28 minutes from long-range after Doughty did well to pick him out in a tight area.

On 39 minutes, Marriott was inches away from converting a low Maddison cross after a scrappy spell in the game here both teams struggled to deal with the awful surface. Four minutes of added time was indicated and inside the first minute of that, Solomon-Otabor headed over the bar at the back post.

Moments later and the visitors were level and it in controversial circumstances as DELFOUNSO appeared to bundle the ball over the line with his arm after good work from Solomon-Otabor, but incredibly the assistant and referee both missed it despite lengthy Posh protests. Maddison saw a shot saved by Lumley at the other end after cutting inside onto his left-foot.

Maddison curled over after forcing his way into the box five minutes after the re-start while Baldwin did well at the other end to block after Delfounso produced a sharp shot on the turn. Mellor was finally cautioned on 57 minutes for persistent fouling if nothing else, the latest foul on Forrester. Marriott was booked for dissent just after the hour mark after showing frustration at being penalised for a soft free-kick.

Gnanduillet headed wide from a driven cross on 68 minutes, just getting ahead of Bond to the cross into the box. Posh made a change on 75 minutes with Omar Bogle replacing Forrester. Ryan fired over from long-range on 80 minutes for the Seasiders. Bond did well to grab a loose ball after a bit of a scramble before George Cooper replaced Ward.