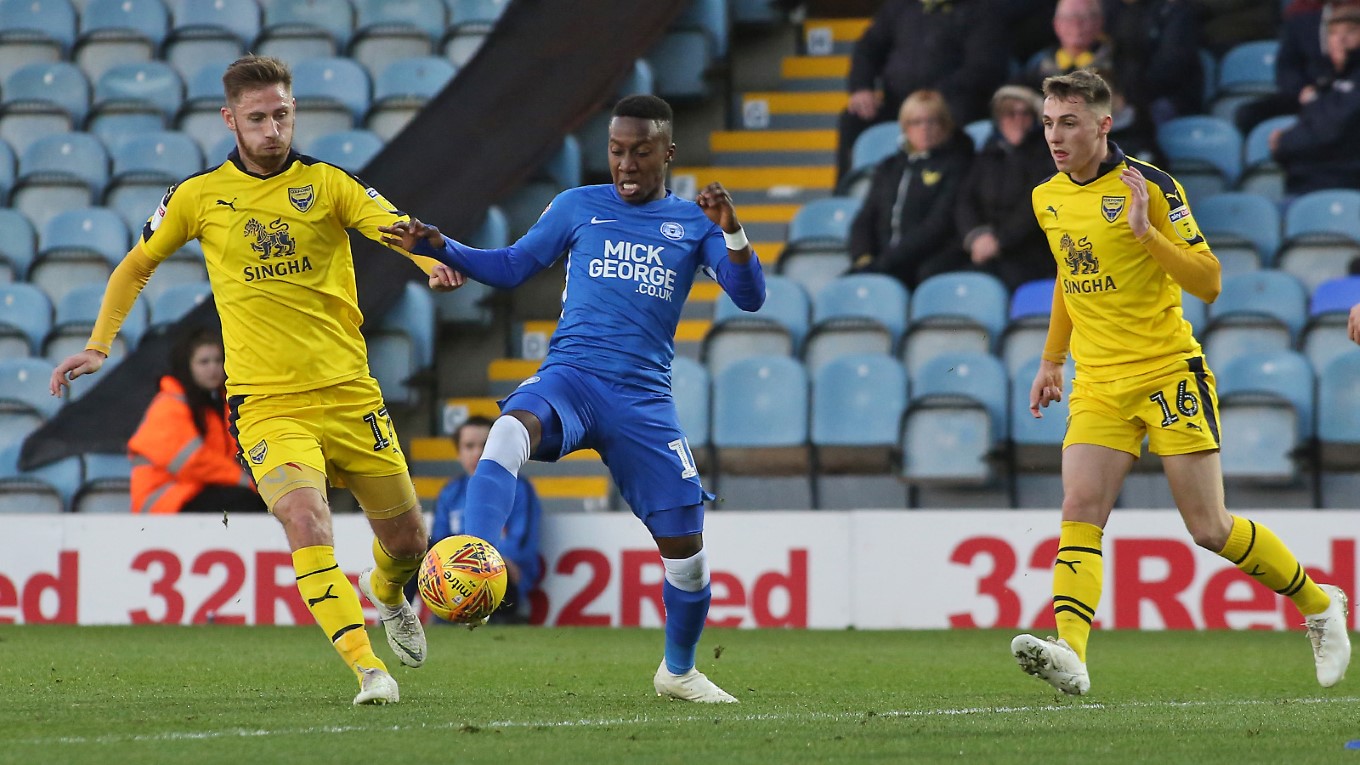 Posh draw 2-2 with Oxford United at the ABAX Stadium.

Peterborough United were forced to settle for a point at the ABAX Stadium as a late penalty kick from James Henry earned Oxford United a share of the spoils, but the draw keeps the unbeaten run going ahead of a trip to Bradford City in an Emirates FA Cup second round replay on Tuesday evening.

Posh opened the scoring on nine minutes and it was a wonderful first-time finish from Ivan TONEY who fired home on the volley after an intelligent knock-down by strike partner Matt Godden. Godden then saw an effort saved by the legs of Eastwood before Colin Daniel saw an effort somehow kept out by a combination of the keeper and the man on the line.

The goalscorer Toney required treatment on the quarter of an hour mark after trying to hook on a pass to Godden but was soon back in the action. Oxford had the ball in the back of the net on 26 minutes after a swift counter attack but James Henry’s clever flick was chalked off for offside.

Aaron Chapman was well placed to keep out a long-range Whyte effort on the half hour mark as the visitors began to grow in confidence. Dembele scuffed a shot with his left-foot at the back post following a deep Godden delivery moments later as Posh came close to a second goal.

Mackie was cautioned for a flaying arm into the face of Tafazolli on 33 minutes. Browne followed him into the book for a blatant tug back on the shirt of Joe Ward. The visitors levelled the scores on 41 minutes as experienced winger James HENRY rifled a fine effort into the top corner from the edge of the penalty area.

Tafazolli was cautioned moments later for a foul as the visitors broke at pace following a poor touch from Daniel. Chapman did well to beat a long-range Mackie effort away from danger as the bouncing shot came through a crowd as the game entered three minutes of first half stoppage time.

Chapman produced a fine stop to keep out Henry as the visitors pushed for a second goal in the second 45 minutes which had started as a scrappy affair. Posh made a double change on 70 minutes with Jason Cummings and Mark O’Hara replacing Godden and Reed.

Posh got themselves back in front on 74 minutes and it was a superb solo effort from Siriki DEMBELE who cut inside onto his right-foot and unleashed a superb shot into the top corner from 25-yards. Cummings sent a diving header wide after a deflected Daniel effort as the game moved into the final 10 minutes.

Nelson was cautioned for a foul on Woodyard on 83 minutes. Cummings then squandered a fine opportunity to make it 3-1 after taking a good first touch, the Nottingham Forest loanee dragging his left-foot shot wide of the target.

The visitors levelled three minutes from time after Daniel was penalised for a foul in the box. James HENRY coolly converting the penalty kick.