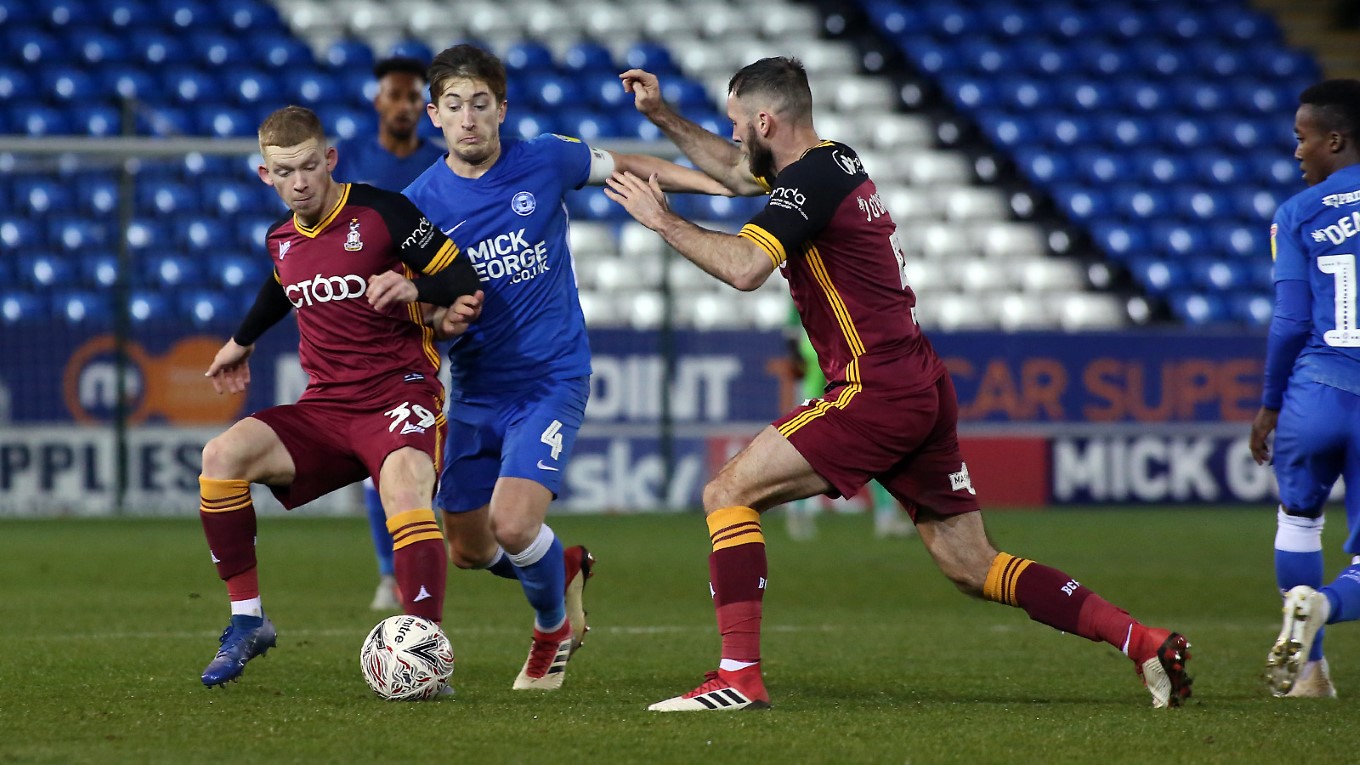 Visitors secure replay after late fightback at the ABAX Stadium.

Peterborough United will face a replay at Valley Parade after Bradford City scored twice in the final 10 minutes at the ABAX Stadium to secure an unlikely second crack at this Emirates FA Cup second round tie.

Posh dominated for long spells and were 2-0 up through goals from Ivan Toney and Siriki Dembele but an outstanding goal out of the blue from Kelvin Mellor and a hugely deflected effort from substitute Luca Colville earned the visitors a 2-2 draw.

Paul Caddis was shown a yellow card inside the opening five minutes for a fairly blatant shirt tug on Siriki Dembele. Karl Henry followed him into the book on eight minutes with a ridiculous challenge on Marcus Maddison miles from any danger.

Ryan Tafazolli headed a driven Louis Reed corner well wide of the target on 12 minutes after a wonderful cross from Joe Ward somehow evaded everyone in the six-yard box. Aaron Chapman was well placed to keep out a header from Mellor after a well worked Bantams set-piece on the quarter hour mark.

O’Donnell produced a fine stop on 21 minutes to keep out Toney who had linked up superbly well with strike partner Matt Godden following a long clearance from Chapman. The deadlock was broken on 29 minutes and it was a picture-book goal, a wonderful break from Posh, Marcus Maddison with the delightful defence splitting pass and Ivan TONEY finished the move off with a crisp finish past O’Donnell.

Ball was cautioned for a foul on Dembele moments later, the third Bantams player to be booked by Mr Kettle. Jim O’Brien fired wide from long-range on 33 minutes after a neat one two with O’Connor.

Godden wasn’t far away from doubling the lead moments later after Toney charged down the keeper’s clearance, it was a difficult first-time opportunity for the former Stevenage man and he just couldn’t steer it goal-wards.

Posh doubled the lead in first half stoppage time as Siriki DEMBELE finished a superb pass from Toney into the bottom corner with his left-foot. Chapman produced a fine stop to divert a drive from Doyle around the post on 50 minutes as the visitors came close to reducing the arrears.

Maddison saw a cross-shot tipped away by O’Donnell before Reed lashed a volley over the bar from the edge of the box. The visitors made a double change just after the hour mark with Luca Colville and George Miller introduced by David Hopkin.

Posh made a change on 70 minutes with Jason Cummings replacing the hard-working Godden. Dembele fired wide with his left-foot after doing all the hard work to burst into the box moments later as Posh pressed for a third goal.

Maddison did have the ball in the back of the net after racing onto a Ward pass but bizarrely the assistant referee spotted a foul and ruled it out. Bradford scored a superb goal to make the last 10 minutes interesting on 83 minutes as MELLOR let fly from distance and saw his outstanding effort find the top corner.

The visitors levelled with the aid of a huge deflection on 88 minutes as substitute COLVILLE found the back of the net from distance. Maddison was cautioned for diving in stoppage time as the game headed for a replay.