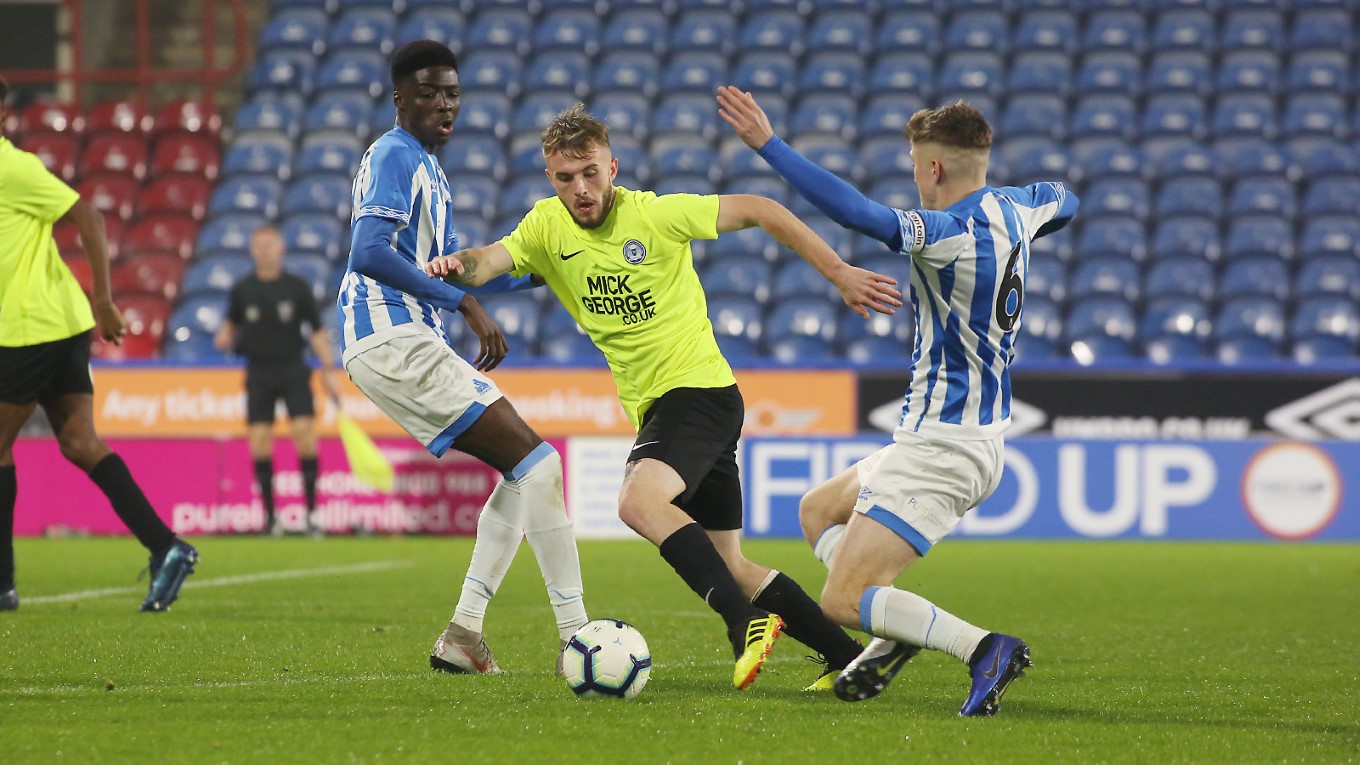 Posh under 18s progress to the fourth round of FA Youth Cup.

The Peterborough United under 18s recorded arguably the best FA Youth Cup result of the decade with a hard-fought 2-0 victory against Huddersfield Town at the John Smith’s Stadium as Matthew Etherington’s men played over an hour with 10-men but moved into the fourth round of the competition with relative ease.

Oli Shackleton, who was excellent, opened the scoring with a fine finish and he chalked up an assist in the second half as substitute Flynn Clarke doubled the lead. Replacement goalkeeper Josh Allen made one or two excellent saves, but Posh could have added to their tally.

Jack Gurney made an excellent start to the contest with some quick feet that saw him burst into the penalty area, his lay-off picked out Brad Rolt, but his cross into the box was intercepted. The deadlock was broken on 12 minutes and it was a deserved lead for Posh as SHACKLETON cut inside onto his right-foot and fired an excellent shot into the back of the net via the inside of the post from just outside of the penalty area.

Posh were dealt a huge blow on 26 minutes as goalkeeper Will Blackmore was shown a straight red card for clattering into Elliott as he raced through. It looked a harsh decision as there was no real intent to clatter into the front man and it wasn’t in a central position but Mr Tankard, after talking to his assistant sent the keeper from the field.

Josh Allen immediately replaced Ricky Jade-Jones as Posh were forced to make a change and now faced an hour to play with 10 men. The home side were fuming moments later as Archie Jones appeared to foul his man in the box following a swift counter attack, but the referee was adamant the Posh midfield man had got a touch on the ball.

Bellagambi denied Shackleton a second with a good stop with his legs after excellent solo work from the Posh front man. Shackleton was denied again by the keeper on 40 minutes after a good break from Douglas down the right hand side.

Rolt was cautioned for a foul less than 60 seconds later by the referee who was determined to play a focal part. Elliott sliced a shot wide of the target at the other end after bursting into the box, a combination of keeper Allen and the retreating Fosu did just enough to put the front man off.

O’Malley hit the post for the Terriers straight after the interval with a curling left-footed cross-shot as the hosts came out of the traps quickly. Garner had the ball in the back of the net with a looping header on 56 minutes, but the assistant referee had his flag raised on the near side for offside.

Josh Allen made a fine stop to push a Daly curler around the post just before the hour mark before Posh made a second change with Flynn Clarke replacing Archie Jones. Allen continued his fine game with another good stop on 66 minutes, pushing a skidding effort from Elliott around the post.

On 75 minutes, Posh doubled their lead and it was a fine break, Shackleton playing in substitute Flynn CLARKE and he squeezed the ball through the legs of the advancing goalkeeper. Substitute Headley fired over at the other end after finding a bit of room in the box but a last ditch sliding tackle from Barker put the striker off.

Posh made their third change on 81 minutes with Nathan Rudman, a goalscorer against Cambridge at the weekend, replacing the excellent Shackleton. Allen made two superb saves in stoppage time to keep out Rowe and Headley but Posh held on for the victory.