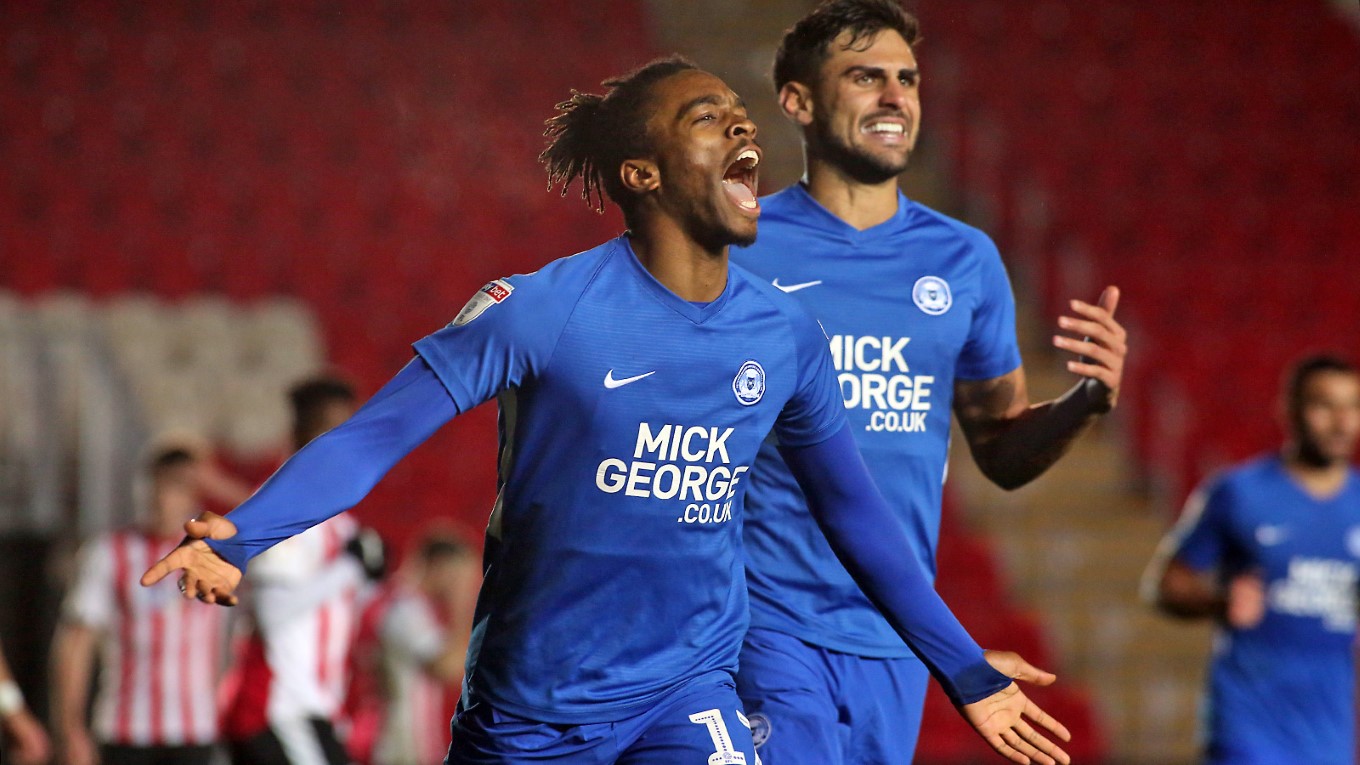 Peterborough united are into the third round of the Checkatrade Trophy after a comfortable 2-0 victory at St. James Park against Exeter City with Ivan Toney continuing his fine form in front of goal and Jason Cummings ending his run without a goal.

George Cooper saw an early free-kick strike the wall as Posh tried to turn their early dominance in the cup tie into a breakthrough. Conor O’Malley made the first save of the evening on 20 minutes to deny Tristan Abrahams before at the other end Jason Cummings squandered a fine opportunity to make it 1-0, wriggling the ball onto his left-foot from a Cooper pass only to see his dinked effort gathered by Hamon.

Posh were a whisker away from a deserved lead on 24 minutes after a poor Hamon clearance went straight to Reed, he was on the halfway line, but his first time effort looked for all the world that it was going to nestle into the back of the net, but somehow it took a spin on the bounce and struck the post.

Cummings was then denied by the keeper after an excellent run from skipper Woodyard down the left hand side, Hamon doing well to deny the striker with his feet. A fine delivery from Daniel picked out Toney on 29 minutes, the striker’s looping header dissected the keeper but Moxey was back there to clear off the line.

Irishman O’Malley made his second save of the evening on 35 minutes to deny Abrahams, a bit less straightforward for the keeper as he dashed from his line to divert the effort around the post.  Neither side made any changes at the break with Posh looking to build on their first half efforts.

Maddison saw a wonderful free-kick crack the crossbar on 51 minutes after he himself had been felled by Woodman 25-yards from goal. O’Malley did well to dash from his goal to deny the pacy Ogbene on 55 minutes as the hosts nearly caught Posh on the break.

Toney was cautioned for an off the ball incident with Ogbene also going into the referee’s book for his unnecessary reaction. Tafazolli volleyed over after an intelligent knock down from Toney on 61 minutes.

Posh got themselves in front on 68 minutes as a short corner was worked to perfection with Marcus Maddison delivering a perfect cross for the in-form Ivan TONEY who made mistake, planting his header past the keeper.

Maddison was cautioned for a foul on 69 minutes by referee Mr Young. Cummings fired over from 25-yards moments later after finding a bit of room to manoeuvre into a shooting position. Maddison saw a curler beaten clear by Hamon before further efforts from Toney and Ward were deflected wide.

Posh doubled the lead on 77 minutes as a wonderful teasing cross from the right-foot of Maddison picked out CUMMINGS at the back post and he nodded home for his second goal in the Checkatrade Trophy.

Posh made a change on 82 minutes with Matt Godden replacing Cummings. Toney saw a shot deflect wide of the near post after another teasing Maddison centre as Posh pushed for a deserved third. Moxey fired over following an over-elaborate free-kick routine three minutes from time for the Grecians.

Godden was denied again by Hamon deep into stoppage time, the keeper making a wonderful fingertip save. The draw for the third round takes place on Saturday during the Soccer Saturday programme.