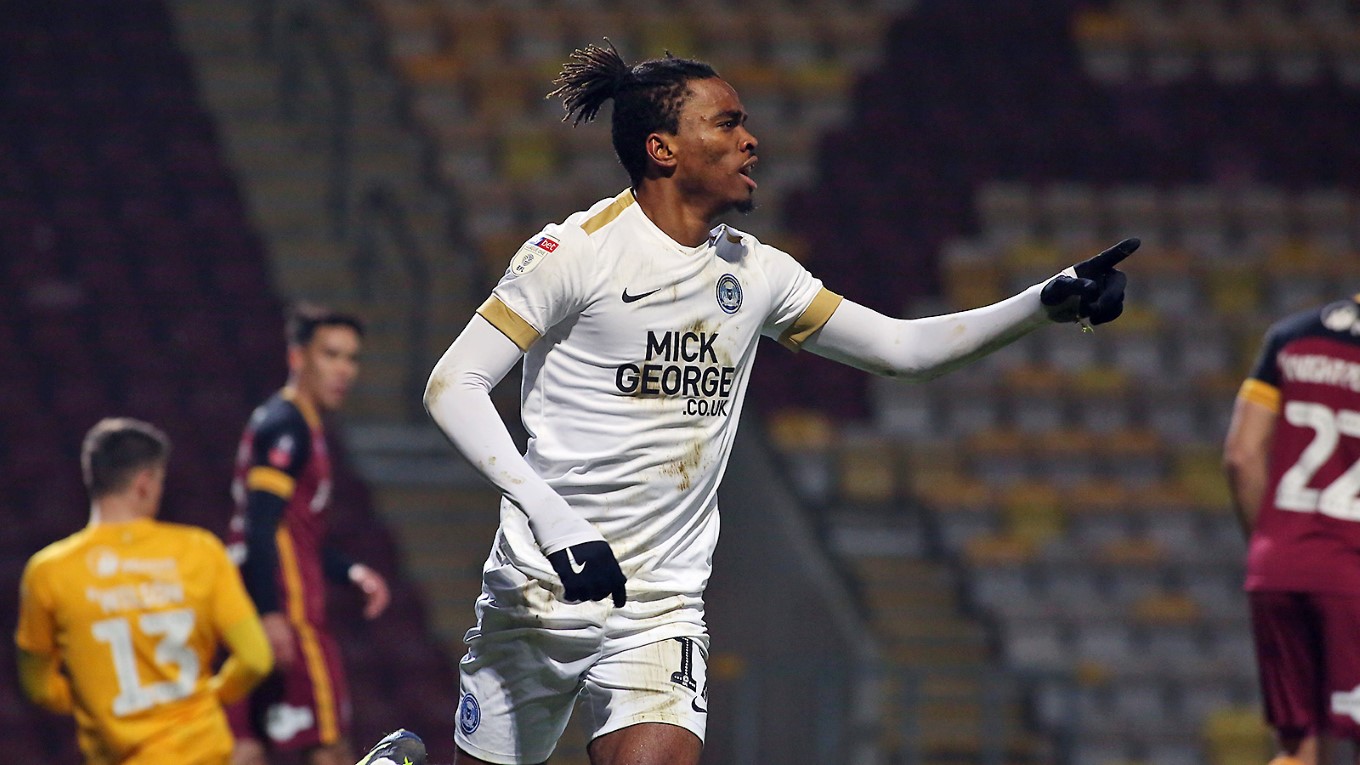 Peterborough United will travel to Sky Bet Championship side Middlesbrough in the third round of the Emirates FA Cup after an incredible second round replay at the Northern Commercials Stadium which ended with Conor O’Malley saving three penalty kicks in the shoot-out after a pulsating 4-4 draw in the 120 minutes.

Ivan Toney scored a superb hat-trick, his first of his career and the first goal from the centre circle was outstanding. Marcus Maddison netted his second goal of the season but Posh squandered a 3-1 lead to be behind at 4-3 with five minutes of normal time to go until Toney completed his treble with another excellent header.

George Miller was a whisker away from opening the scoring for the Bantams on six minutes after a poor defensive clearance, but his shot went inches wide. Ivan Toney forced goalkeeper Ben Wilson into a save at the other end after bursting into the penalty area on the angle as Posh came close to the breakthrough less than 60 seconds after they had that scare.

O’Malley did well to push a skidding effort from Ball around the post on 14 minutes as the Bantams began to assert a bit of pressure. Posh opened the scoring on 18 minutes and what a goal it was, arguably the best strike you will see all season. In-form Ivan TONEY won a free-kick in the centre circle, placed the ball and pinged an unbelievable effort over the keeper from almost the half-way line.

The lead was doubled two minutes later as Maddison delivered an inch-perfect cross for TONEY and he stooped to head home from six-yards. The home side were soon back in the game as O’Malley failed to collect a deep cross and after Daniel had initially diverted a shot from Doyle on to the post, MILLER gobbled up the rebound.

Ball then curled an effort over the bar after cutting inside onto his left-foot on 22 minutes before O’Malley was in the right place to gather a curler from Ball. O’Connor was cautioned for shoving Toney to the ground on 28 minutes to the anger of the home faithful.

Toney had the ball in the back of the net again on the half hour mark from another wonderful Maddison delivery but this time the assistant referee ruled the goal out for offside. Ball was cautioned for a foul on 35 minutes but the referee allowed the play to continue and Maddison curled over with his left-foot.

Toney was booked by the referee Mr Joyce on 37 minutes for a soft foul, almost like the official pulled out the yellow card because of the jeers of the home crowd. O’Malley did well to deal with a swerving effort from O’Brien after Dembele was dispossessed.

Payne flashed a shot past the far upright on 41 minutes as the on-loan attacking midfielder cut inside onto his left-foot. Posh got themselves their two goal cushion in first half stoppage time as fine play from Dembele down the left saw him get to the by-line, his cross was diverted towards goal by Cummings, Wilson parried and MADDISON was there to tap home.

O’Malley was well placed to keep out Miller at the near post on 48 minutes as the hosts came close to reducing the arrears. The hosts were back in the cup tie on 52 minutes as a deflected shot looped up into the air, Payne’s overhead kick was blocked but BALL was there to gobble up the rebound.

The home side levelled on 58 minutes as a deep cross into the box was headed into the roof of the net by full-back CADDIS. Posh made a double change on 64 minutes with George Cooper and Matt Godden replacing Cummings and Dembele.

Maddison was a whisker away from finding Toney at the back post after cutting inside onto his left-foot on 76 minutes as Posh pushed for an equaliser. Substitute Godden headed wide from a Toney cross on the stretch as the tie entered the final 10 minutes.

On 84 minutes, Posh got a leveller as a fine cross from Maddison was nodded home for his hat-trick by Ivan TONEY. O’Connor rattled the bar from a deep cross before Maddison was cautioned for dissent. Caddis saw a late free-kick gathered by O’Malley before five more minutes of added time. There were no further goals so the tie went into extra-time.

Doyle was denied by O’Malley four minutes into extra-time as Posh failed to clear a cross into the box. Ward saw a shot fly wide on 99 minutes from long-range after a patient Posh build-up. George Cooper was cautioned for a shirt tug on 104 minutes.

Chicksen sent a rasping drive over the crossbar on 109 minutes from 25-yards after Payne’s shot was blocked. Cooper squandered a great chance to give Posh the lead again moments later after wonderful wing play from Maddison, the ex-Crewe man seeing his half volley go over.

Wilson produced a superb stop from point blank range to keep out Ward on 112 minutes after a good pass from Maddison as Posh came close to a fifth. Posh had a glorious chance with four minutes to go as Maddison’s pass was only half cleared into the path of Godden but he fired wide of that far post.

One minute of added time was indicated before penalties were required to see who would travel to Middlesbrough. O’Malley proved to be the hero, saving three times from Karl Henry, Jack Payne and Paul Caddis with Marcus Maddison, Matt Godden and Jamie Walker converting the Posh spot-kicks.