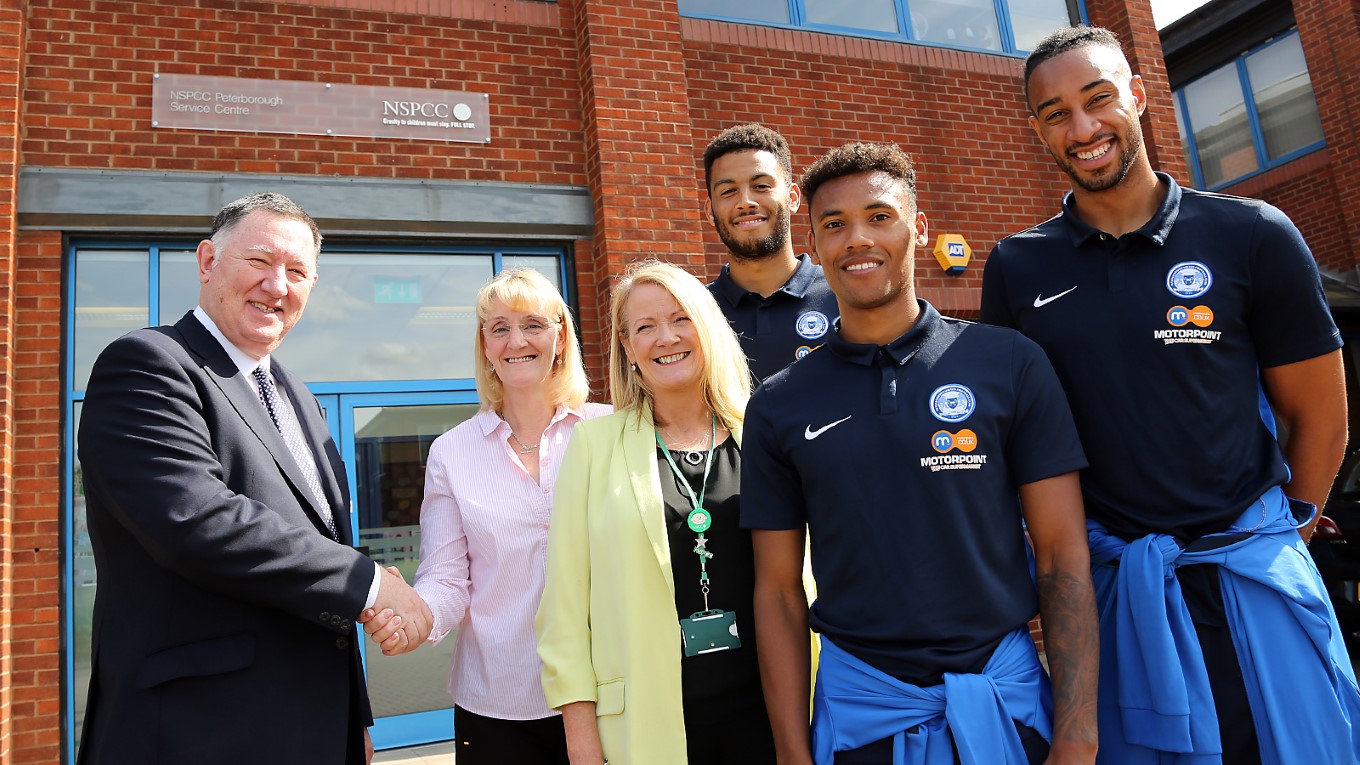 Players and staff visit the NSPCC centre in Peterborough as part of the club's partnership with the charity.

Footballers from Peterborough United visited the NSPCC in the city to find out how their new Charity of the Year is helping protect local children. The children’s charity hosted goalkeeper Aaron Chapman and defenders Rhys Bennett and Tyler Denton at its service centre in Peterborough yesterday (August 30), as well as club chief executive Bob Symns.

The top of League One players and executives saw first-hand how an innovative service called Protect and Respect helps to safeguard young people from child sexual exploitation in the city.  Protect and Respect works with vulnerable young people to help them recognise grooming, exploitation and unhealthy relationships, both online and offline, giving them the tools to understand consent and stay safe from abuse.

Practitioners were on hand to discuss their work and how the one-to-one service, which has helped 78 young people from Peterborough in the last 16 months, benefit children. The players also found out about how the service centre works with victims of sexual abuse, providing therapeutic recovery through art and play to help survivors move forward.

The visit was part of an exciting new Charity of the Year partnership between the NSPCC and Peterborough United that will support local children through the NSPCC Peterborough Business Support Group.

Peterborough United launched the partnership with the NSPCC at their home match against Luton Town FC on Saturday, August 18.

Goalkeeper Aaron Chapman said: “It was really important for us to come and have a look around and learn more about how the NSPCC are helping local children. It was a real eye opener and I think it is important that we try and get the message out there that the NSPCC are there to help in Peterborough. We are in a fortunate place as footballers and anything we can do to help, we will.”

The visit came as NSPCC research showed that one child in every classroom in the East of England has been sent or shown a naked or semi-naked image by an adult. NSPCC Peterborough Team Manager Karen Garvie said: “It was very exciting to have Peterborough United players visit our service centre to see first-hand the work we are doing and help us raise awareness of child sexual exploitation.

“The research we published this week reflects what we are seeing as most children we work with have been sent inappropriate images which can be part of being groomed online. But the tricky thing with child sexual exploitation is that children often don’t know what it is, which makes it harder to combat.

“That’s why our practitioners and our service centre are here - to educate children about sexual exploitation, raise awareness about how to recognise grooming and help those who have been abused to move forward.”

This NSPCC launched round two of its #WildWestWeb campaign this week. It is calling on the Culture Secretary Jeremy Wright and Home Secretary Sajid Javid to combat online grooming. Karen added: “We need tough regulation of social networks to make sure there are fundamental protections for children in place whatever sites they’re using.”