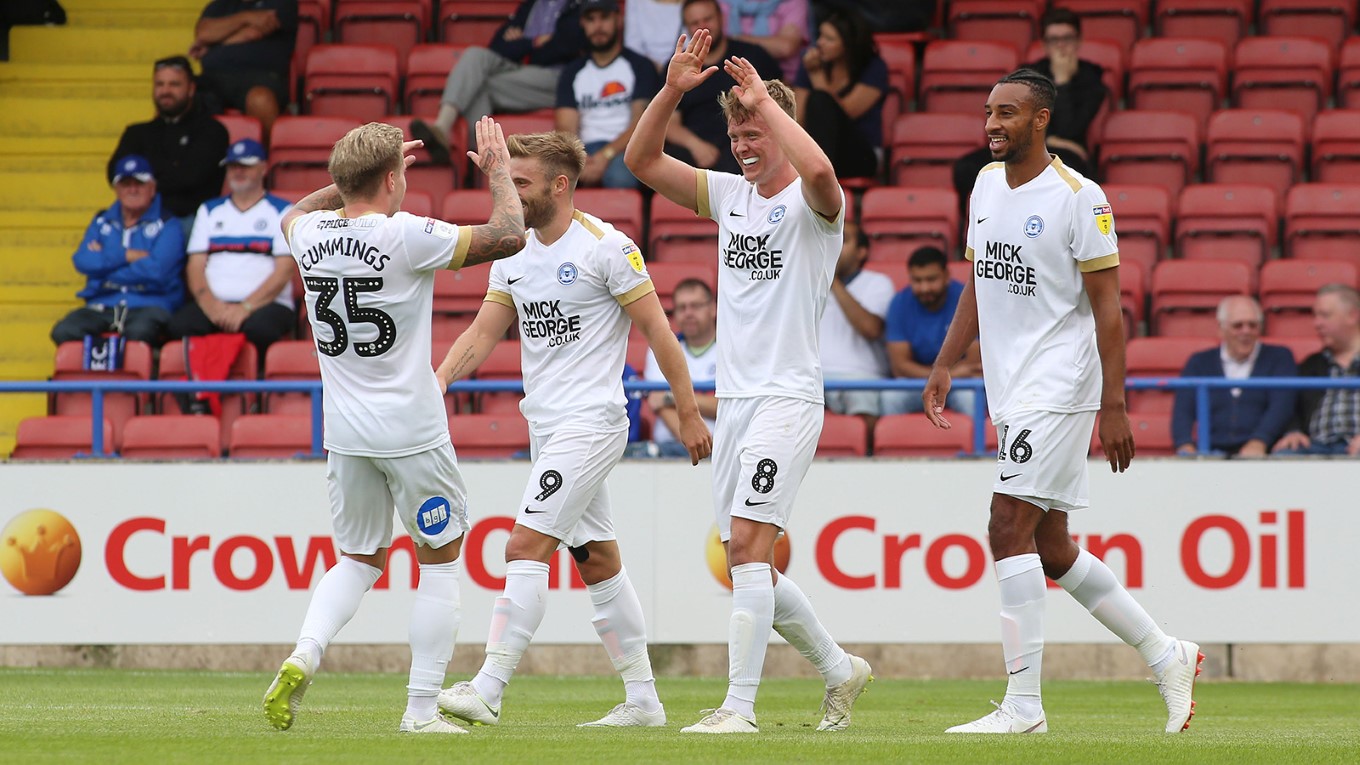 Match report for Rochdale vs Peterborough United on 11 Aug 18

Peterborough United made it two wins from two in emphatic style as a brace from Mark O’Hara and goals from the strikeforce of Jason Cummings and Matt Godden saw Steve Evans men romp to a 4-1 win at the Crown Oil Arena against Rochdale.

Brad Inman nodded a header over the bar inside the opening minute after a quick incisive counter-attack from the home side after Posh gave away possession in the final third. Siriki Dembele tested goalkeeper Lillis with a superb effort from 30-yards which the keeper did well to tip over. Moments later an O’Hara effort hit the boot of Godden, but was routine for the goalkeeper to collect.

The hosts got the breakthrough on 17 minutes as Daniel was penalised for a foul on Rafferty in the box by referee Mr Backhouse. Ian HENDERSON took the spot-kick and sent Chapman the wrong way from 12-yards. Chapman was well placed on 23 minutes to claim a deflected Camps shot as Dale pushed for a second goal.

The scores were level on 26 minutes as a fine cross from Dembele was met by the head of Jason CUMMINGS for his first goal in Posh colours and he celebrated in his trademark style. It was 2-1 to Steve Evans’ men on 34 minutes as a free-kick from Dembele was nodded back across goal by Cummings and O’HARA was there to head home for his second goal in as many games for the club following his summer move from Scotland.

Woodyard was cautioned for a foul on 42 minutes by referee Mr Backhouse after Camps was upended 35-yards from goal. Delaney headed a corner kick wide of the target on the stroke of half-time after Camps’ shot from distance was deflected wide.

Done squandered a fine chance in stoppage time after the ball fell kindly for him on his left-foot, but he stabbed wide of the target. McGahey was cautioned for a foul on Dembele following a strong run moments later. From the resulting free-kick, Dembele saw a superb free-kick parried by Lillis and GODDEN was on hand to score the rebound to give Posh a two-goal half-time cushion.

Rochdale made a change on 49 minutes with Calvin Andrew replacing Rafferty. Wilbraham headed a teasing Inman cross over the bar on 53 minutes before Lillis made a wonderful stop at the other end to tip a Godden volley around the post.

Daniel then saw a low shot well gathered by Lillis after good hold-up play by Cummings against the odds. Andrew was denied by the knee of Chapman before Dembele saw a powerful drive from distance clip the top of the crossbar with Lillis clutching at thin air.

Dembele curled over from distance before Ivan Toney replaced Cummings in the Posh attack on 72 minutes. Former Posh left-back Kgosi Ntlhe replaced Done in the final Dale change of the afternoon 13 minutes from time. Ntlhe had a fine chance to reduce the arrears after Chapman had denied Andrew with a fine stop but the defender fired over.

Steve Evans replaced Dembele with Callum Cooke with five minutes to play. Posh made it 4-1 deep into stoppage time as good strength from Toney allowed O’HARA to stride through and confidently slot the ball past the advancing keeper.