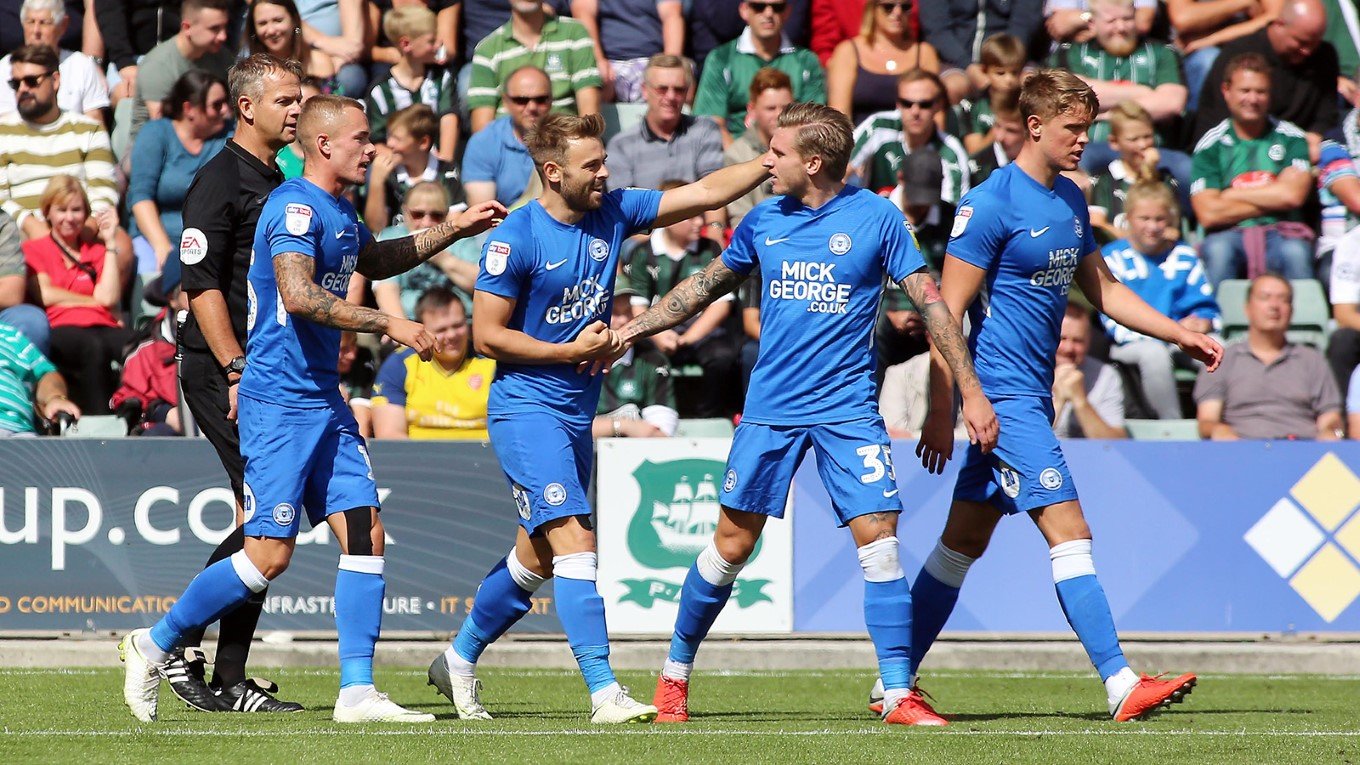 Peterborough United made it five league wins from five for the first time in the club’s history at the start of a campaign following a five-star performance against Plymouth Argyle at Home Park as Steve Evans’ men romped to three points against the Pilgrims.

Jason Cummings (2), Matt Godden (2) and Sirki Dembele scored the goals but in truth it could have been seven or eight with Cummings, Godden and O’Hara all missing presentable chances in front of goal.

A number of long throws into the box caused plenty of panic in the Plymouth rear-guard and it created a chance for Jason Cummings who did well to round the keeper but from a tight angle his shot was smothered by Macey. Mark O’Hara then saw a downward header gathered by the goalkeeper after another throw wasn’t cleared.

The deadlock came on seven minutes as Jason Cummings took advantage of a poor Macey clearance to provide a wonderful cross for his strike partner Matt GODDEN and he made no mistake side-footing past the keeper to give Posh the lead.

That lead was doubled on 10 minutes as Cummings again provided the assist, this time picking out DEMBELE in a wide area and he took a touch before firing a low left-footed shot into the back of the net via the inside of the far post.

O’Hara could have made it 3-0 from a teasing Ward centre, but he powered his header from close-range over the crossbar. Chapman tipped a fierce Carey effort onto the outside of the post on 20 minutes before Ladapo headed the resulting set-piece wide of the target.

It should have been 3-0 to Posh on 26 minutes as Canavan completely failed to control a long ball, but Cummings racing clear, opened his body up and side-footed wide of the far post. Songo’o then headed a clipped cross into the box wide of the target as Plymouth pressed at the other end. Ladapo was next to try his luck but his shot on the turn went well wide.

Chapman was well placed to deny Ladapo from a fine cross into the box as Plymouth made progress, particularly down their left and the Posh right. Ladapo then fired over the bar from just inside of the box as Argyle carved out another opportunity.

Ness sent a low shot wide from 20-yards on 41 minutes as Posh again invited a little bit of pressure because they were unable to clear the box. Ward saw a shot from 30-yards gathered by Macey before Godden lost his footing when he was in a decent position.

Posh made it 3-0 within two minutes of the second half starting, Joe Ward picked out Matt Godden and his inch-perfect cross found CUMMINGS who this time made no mistake, rolling the ball into the corner of the net. Godden immediately had a chance to make it four after being played clean through on goal but he somehow fired wide of the near post.

Posh made it 4-0 on 54 minutes as Joe Ward was felled in the box by Carey and CUMMINGS stepped up and rifled the penalty into the net via the underside of the crossbar. Ladapo fired well wide with his left-foot on the hour mark as Argyle tried to respond.

Posh had the ball in the net again on 65 minutes after Daniel’s low cross was turned home by Cummings but the goal was chalked off for offside. Chapman was well placed to deny Ladapo from close-range on 66 minutes after Posh failed to clear a corner kick.

Sarcevic dragged a shot wide moments later after a good bit of skill got himself into a shooting position. The same player was then cautioned for a foul on Woodyard who had kept possession expertly for the team. Sarcevic then stabbed wide of the target from the edge of the box on 80 minutes as Ivan Toney replaced Cummings.

Toney fired wide with his left-foot moments later after Dembele intercepted a poor Songo’o error. Marcus Maddison replaced Dembele with five minutes to play as Steve Evans made his second change of the afternoon.

Plymouth got a consolation goal deep into stoppage time as centre back EDWARDS sent a towering header past Chapman from a free-kick. Posh went straight down the other end and restored their four goal cushion though, Toney feeding GODDEN who made no mistake with his left-foot.