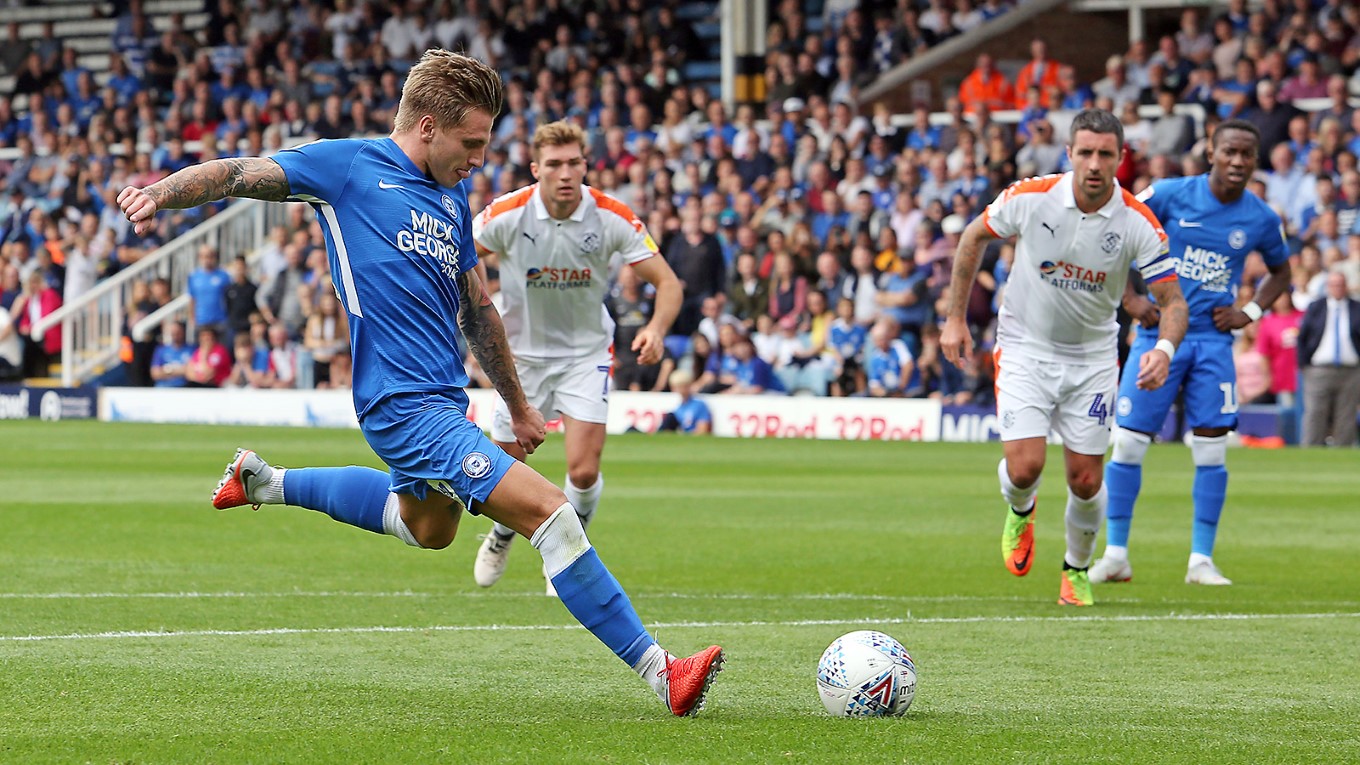 Posh continue 100% start to league campaign with a 3-1 victory.

Peterborough United made it three Sky Bet League One victories out of three with a 3-1 victory over Luton Town in front of over 8,000 supporters at the ABAX Stadium with the Hatters blown away following a dominant first half display.

Jason Cummings floated a free-kick wide of the target on eight minutes after Siriki Dembele had been upended after a forceful run.  Posh got themselves into a deserved lead on 17 minutes as Godden fed Cummings with a wonderful pass only to see his strike partner brought down by the defender and then the keeper for good measure. Incredibly there was no booking administered by the match official.

CUMMINGS stepped up and sent the keeper the wrong way from the spot to give Posh the lead. Less than three minutes later Posh were 2-0 up and it was a superb solo effort from Siriki DEMBELE who wriggled into the penalty area and fired an unstoppable left-foot shot into the roof of the net.

Potts was cautioned for a foul on Ward moments later as the Hatters became frustrated with the start to the game. Hylton saw an ambitious lob from long-range land on the roof of the netting as Luton came close to reducing the arrears.

Luton made a change on 28 minutes as Glen Rea replaced McCormack in the Town midfield. It was 3-0 to Posh on 37 minutes and it came from a lightening quick counter attack led by Dembele, who first used strength in an aerial duel before rolling a pass into the path of CUMMINGS who took a touch and fired a low left-foot shot past the keeper for his second goal of the game.

Luton thought they were back in it on 38 minutes as the referee pointed to the spot following a challenge by Daniel on Stacey but on the advice of the assistant on the near side, the decision was reversed. Dembele was denied from distance by a good Stech stop before Daniel fizzed the rebound from distance wide of the far post.

Stacey saw a deflected drive from long-range claimed by Chapman deep into first half stoppage time after being afforded a bit of room 30-yards from goal. Godden saw a snap-shot moments into the second half beaten away by keeper Stech.

Lee fired over from long-range on 55 minutes as the Hatters pressed for a breakthrough. Lee saw a free-kick on the hour mark strike the wall before Rea fired the rebound well wide of the target on the half volley.

Rea fired well wide of the target on 70 minutes after a bit of a scramble in the Posh penalty area. Lee then headed a cross straight at goalkeeper Chapman before both sides made changes with Ivan Toney the Posh man introduced.

The Hatters pulled a goal back on 78 minutes as a deep cross to the far post was met by STACY, his cross-shot appeared to take a deflection off a Posh defender before finding the way into the back of the net.

Hylton dragged a shot wide of the far post on 83 minutes before George Cooper replaced Dembele. Toney saw a shot deflect wide for a corner kick after good work from Joe Ward on 87 minutes. Toney saw a powerful header from a driven Cooper corner kick saved at the second attempt by Stech.