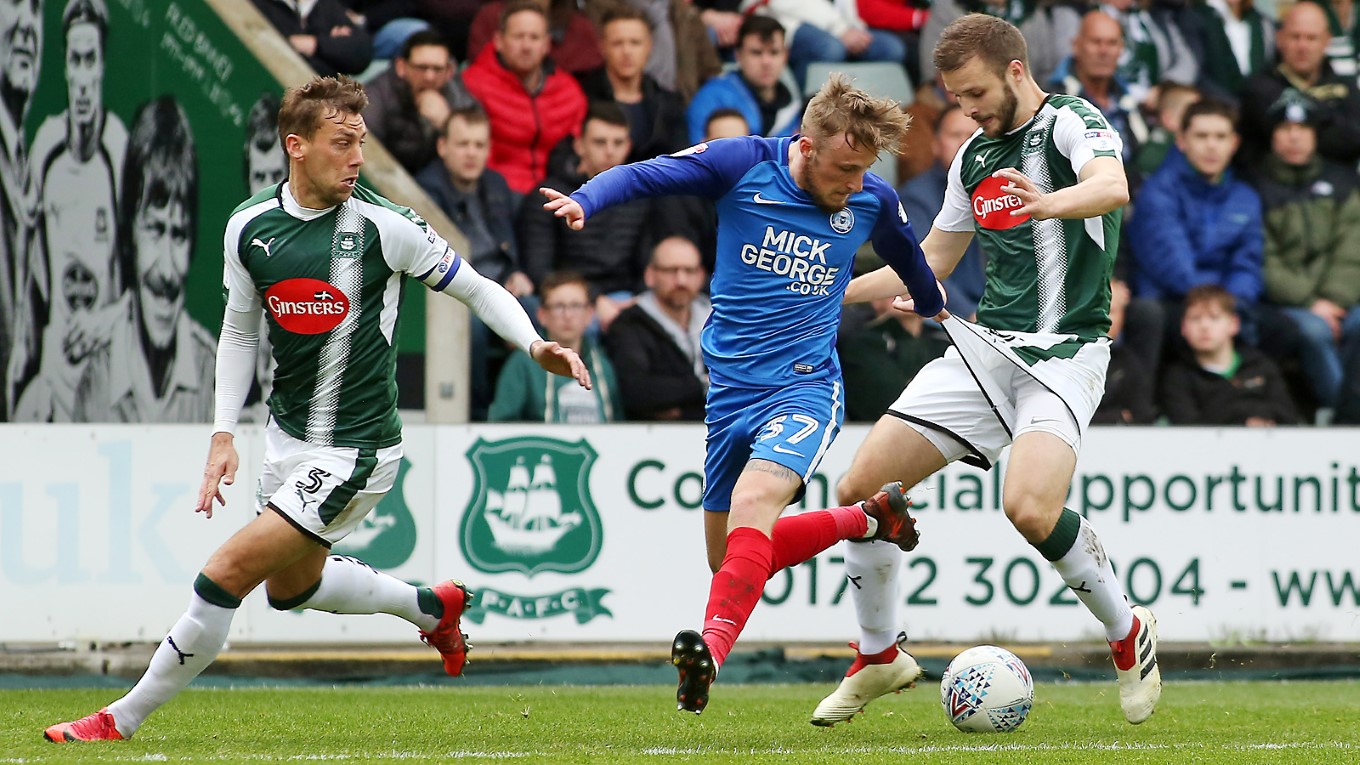 Peterborough United ended with just nine men and conceded in stoppage time as play-off hopefuls Plymouth Argyle came from behind to secure a 2-1 victory at Home Park as the Pilgrims continued their fine run of form since the turn of the year with a hard-fought three points.

Plymouth ha appeals for a spot-kick turned down on six minutes as Graham Carey went down under a challenge from Anthony Grant, but the protests were waved away by the official. The deadlock was broken on six minutes and no surprise on the goal-scorer, number 32 of the season for Jack MARRIOTT who raced onto a pass from George Cooper and executed a wonderful lob over goalkeeper Letheren.

Sonny Bradley fired well wide of the target on 12 minutes after letting fly from long-range as the Pilgrims began to settle down after the shock of conceding. On 14 minutes, Posh were close to doubling the advantage after some wonderful Posh football, Grant, Edwards and Da Silva Lopes all involved, the latter picking out the onrushing Cooper 12-yards from goal but his shot just cleared the crossbar.

Ness fired over on the half-volley moments later after Taylor could only half clear a Carey corner kick. Taylor was cautioned after accidently clattering his man on 18 minutes with the home faithful baying for a red card.

The home side levelled the scores on 27 minutes as a cross from the left was headed home at the near post by Ryan TAYLOR giving Conor O’Malley no chance. Ness was cautioned for a very late kick on Cooper on 33 minutes.

Cooper saw an effort clear the crossbar from 30-yards on 36 minutes after good play in midfield from Forrester and Grant. Bradley sent a header over the bar from a deep Carey corner kick on 43 minutes. Argyle made a strong start to the second period and Lameiras clipped the outside of the post with a deflected effort from 20-yards.

Shephard was cautioned for a heavy challenge on 53 minutes. Cooper was also booked for dissent after expressing his displeasure at a very hefty challenge on him following a nutmeg. Posh made a change on 66 minutes with Joe Ward replacing Chris Forrester.

Makasi sliced wide moments later after being picked out by the dangerman Carey. Steve Evans made his second change with just over 21 minutes remaining, Danny Lloyd replacing Cooper. Posh were reduced to 10-men on 75 minutes, Shephard sent-off for catching Carey off the ball.

O’Malley produced a superb stop with his legs to deny substitute Grant on 83 minutes as the striker found a bit of space in the box. Ryan Taylor was cautioned for catching Baldwin in an aerial duel on 87 minutes.

It all unravelled in the final few minutes for Posh as Baldwin was adjudged to have committed a foul following an aerial duel and the referee pointed to the spot. Steven Taylor was shown a second yellow card for delaying the taking of the spot-kick, which was dispatched with aplomb by Graham CAREY.

Carey flashed a shot wide and Lameiras was denied by the body of O’Malley before the referee brought an end to proceedings.