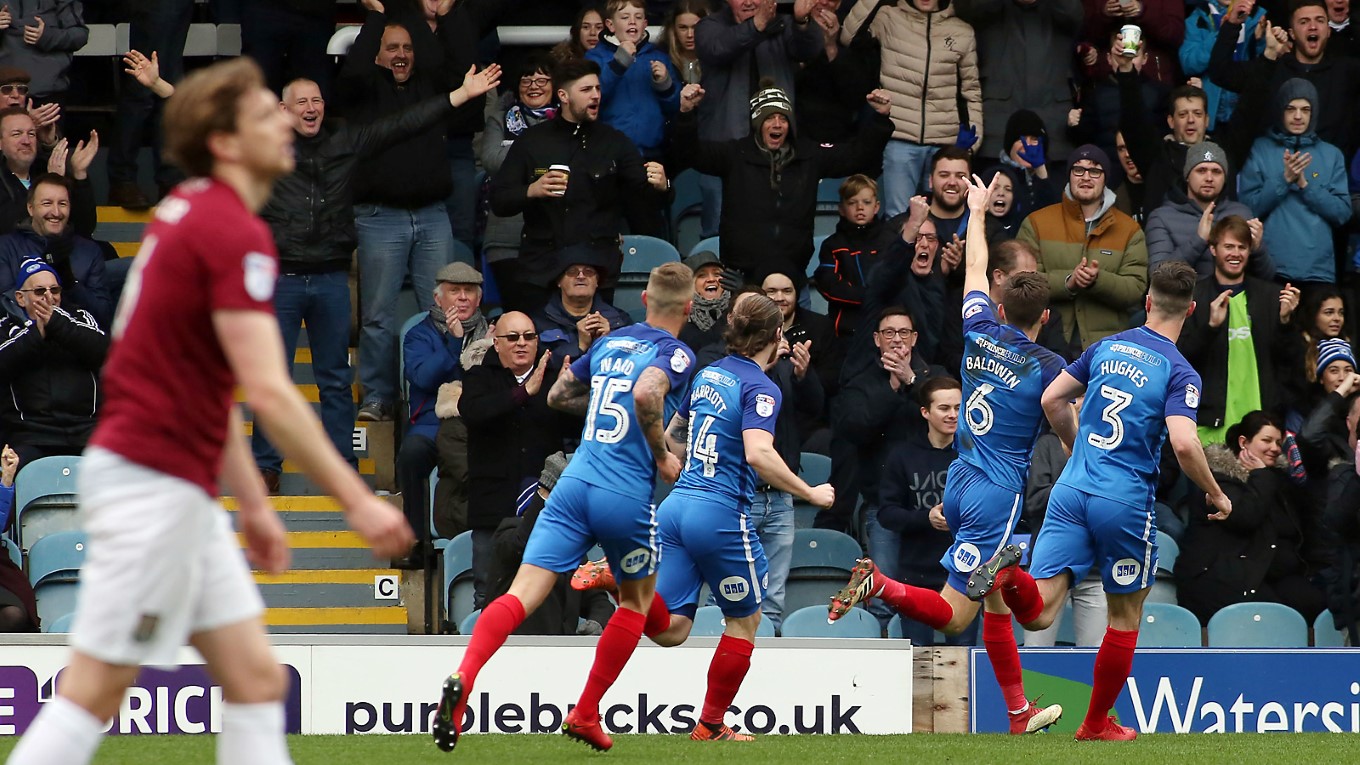 Peterborough United scored twice in as many minutes in the first half to secure a comfortable 2-0 victory over local rivals Northampton Town at the ABAX Stadium with Jack Marriott taking his tally to 31 goals for the season to add to skipper Jack Baldwin’s bullet header from a Liam Shephard free-kick.

Leon Barnett headed wide inside the opening two minutes at the ABAX Stadium as Northampton forced an early corner kick. O’Malley then produced a fine stop to deny Chris Long as the visitors continued to dominate the opening exchanges kicking towards their own supporters behind the goal in the Motorpoint Stand.

The deadlock was broken on 12 minutes and it was skipper Jack BALDWIN who grabbed the goal, heading home a driven Liam Shephard free-kick to give Posh the lead. Posh doubled the lead within two minutes, another free-kick poorly defended and MARRIOTT was there to lob home with his left-foot for his 31nd goal of the campaign.

Powell was then cautioned for a shocking challenge on Maddison right in front of the dugout as the frustrations threatened to tipple over for the Cobblers. Edwards was next to be denied by a flying O’Donnell on 22 minutes as Posh pressed for a third goal.

Edwards came close to extending the advantage after the ball rolled into his path, but he got it stuck under his feet and as he tried to toe poke the ball towards Marriott, Barnett got back to slice behind for a corner kick.

A combination of Taylor and Baldwin produced a fine block to deny Crooks after a wayward Maddison pass played Posh into trouble on 37 minutes. Ward saw a low shot comfortably gathered by O’Donnell at the other end after a good cushioned pass from Edwards.

Marriott was then denied by the keeper after a left-foot shot on the turn after good approach play from Da Silva Lopes. Three minutes of added time was indicated by the fourth official and Hoskins immediately went into the book for a late tackle on Edwards.

Hoskins sent a header over the bar deep into first time stoppage time before the referee brought an end to proceedings. Maddison was booked for diving moments into the second half by referee Michael Salisbury.

Posh had the ball in the back of the net again on 48 minutes as Marriott glanced in a Maddison dink, but the offside flag cut short any celebrations. The visitors made their first change on 54 minutes with Van Veen replacing Powell.

O’Donnell was well positioned to claim an Edwards curler from the edge of the box on the hour mark. The Cobblers hit the base of the post at the far post on 68 minutes as Northampton created their first chance of the second half, Long sliding it to divert a Facey cross. Facey was then booked for bringing down Maddison after he had been nutmegged earlier in the move.

Crooks was booked for a foul on Maddison moments after George Cooper had replaced the hard-working Edwards. Northampton were reduced to 10-men on 78 minutes as skipper Ash Taylor was shown a straight red card for bringing down Marriott as he raced clear.

Cooper saw a shot blocked by the toe of goalkeeper O’Connell following a scramble on 82 minutes. Van Veen was cautioned for a late challenge on Hughes by referee Mr Salisbury. Maddison fired wide from 25-yards before Junior Morias replaced the winger. Five minutes of added time was indicated by the fourth official.