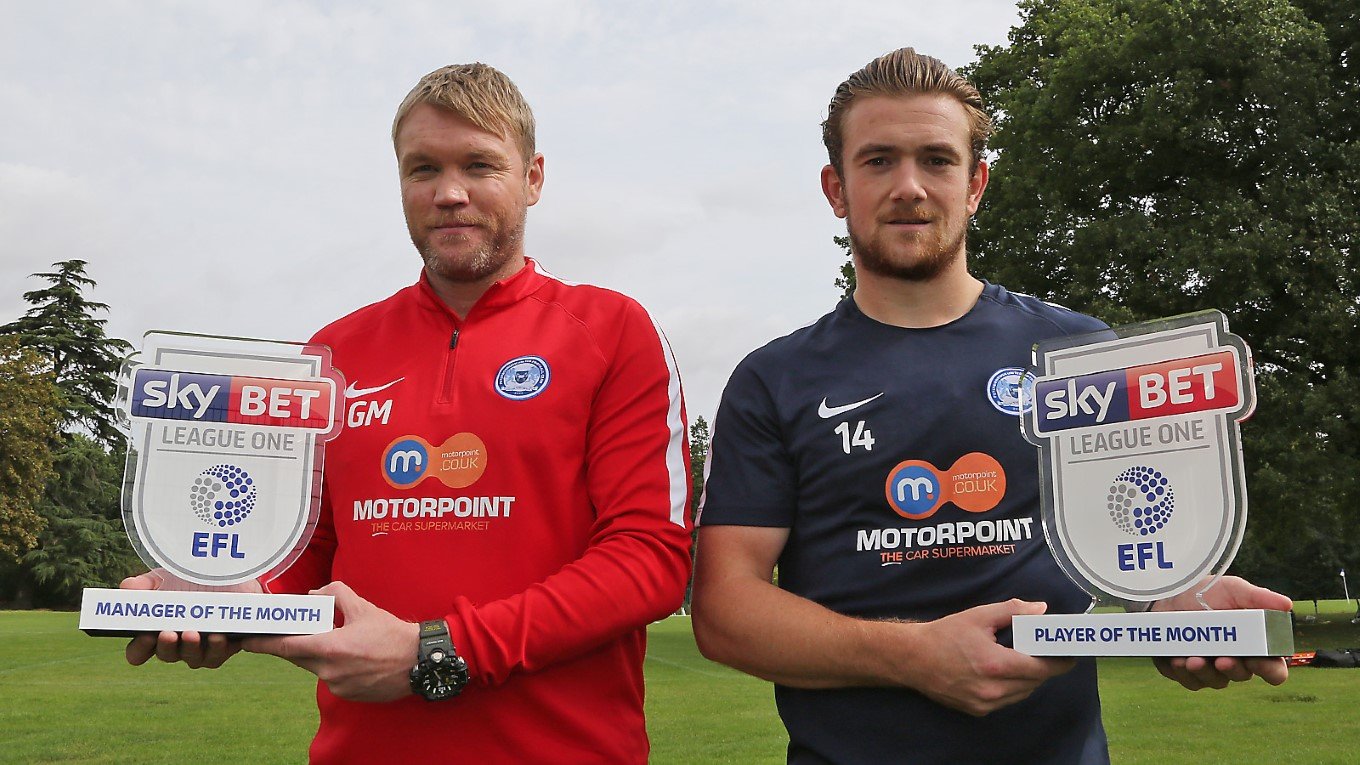 Grant McCann has won the August Sky Bet League One Manager of the Month award and striker Jack Marriott has won the monthly player award.

McCann revived the Posh tradition of goals and entertainment in equal measure as he led them to the top of League One with a perfect record of four straight wins with a 12-4 goal differential, which included 4-1 away victories at Bristol Rovers and Northampton.

McCann said: “I am pleased to receive this award for August and it is as much for the players and my coaching staff as it is for me. We spoke in the summer about how we wanted to start the season and worked very hard in pre-season to get the players ready for that opening day against Plymouth. On paper, we had some tough games in the month, but the players put in some good performances and I know there is more to come.”

George Burley chairs the Sky Bet Manager of the Month judging panel. He said: “Peterborough United have had a great start to the season collecting 13 points from a possible 15 which included an impressive 4 – 1 away win against local rivals Northampton Town. Grant is an exciting young manager who is learning his profession very quickly and has a lethal striker in Jack Marriott who has been in great scoring form.”

Sky Sports’ EFL pundit Don Goodman said: “McCann signed a four-year deal following his appointment at ABAX Stadium in May last year and looks to have found the formula for success at the start of his second term at Posh with a glowing 100% win record in August. The Northern Irishman has really strengthened the spine of his side with the arrivals of Jack Marriott, Michael Doughty and the experience of Steven Taylor playing as one of three central defenders.”

Sky Bet Football Trading Manager Mikey Mumford said: “Peterborough had a testing start on paper, entertaining League One newcomers Plymouth and Rotherham sandwiched between a trip to Bristol Rovers and McCann deserves great credit for claiming a maximum points haul in those fixtures - an achievement chalked up as a 12/1 chance by sponsors Sky Bet.”

Peterborough United striker Jack Marriot has been named the Sky Bet League One Player of the Month for August. What a way to announce your arrival at a new club. Six goals in his first four games for Posh included a hat-trick at Bristol Rovers and an impudent lob against Rotherham that sums up both his trickery and his calm finishing.

Jack Marriot said: “I am delighted to win this award, it is a great way to start my season at a new club. It gives me something to build on. I would like to thank my team-mates and the coaching staff because I wouldn’t have been in a position to win the award without their help and guidance. I am looking forward to the games coming up, we are in confident mood at the minute and long may that continue.”

Sky Sports’ EFL pundit Don Goodman said: “Largely in the shadows of strike partner Danny Hylton at Luton last season, few would have expected Marriott to make the transition into League One seem effortless. His six goals in August leave him just two short of the eight he managed at Kenilworth Road during the whole of League Two last season, yet it’s his speed and movement which will continue to cause headaches for defences in this division.”

Sky Bet Football Trading Manager Mikey Mumford said: “Peterborough were keen to give Marriot a four-year-deal in the summer and that might well prove to be a shrewd piece of business by Darragh MacAnthony and Barry Fry if his goals can tilt Posh towards a genuine promotion push. Marriott’s hat-trick in the 4-1 romp at Bristol Rovers was an 80/1 longshot but those goals have catapulted the 22-year-old to the head of our League One Top Goalscorer market where he can now be found at 9/1 from a freely available 25/1 before his side’s season opener at home to Plymouth.”