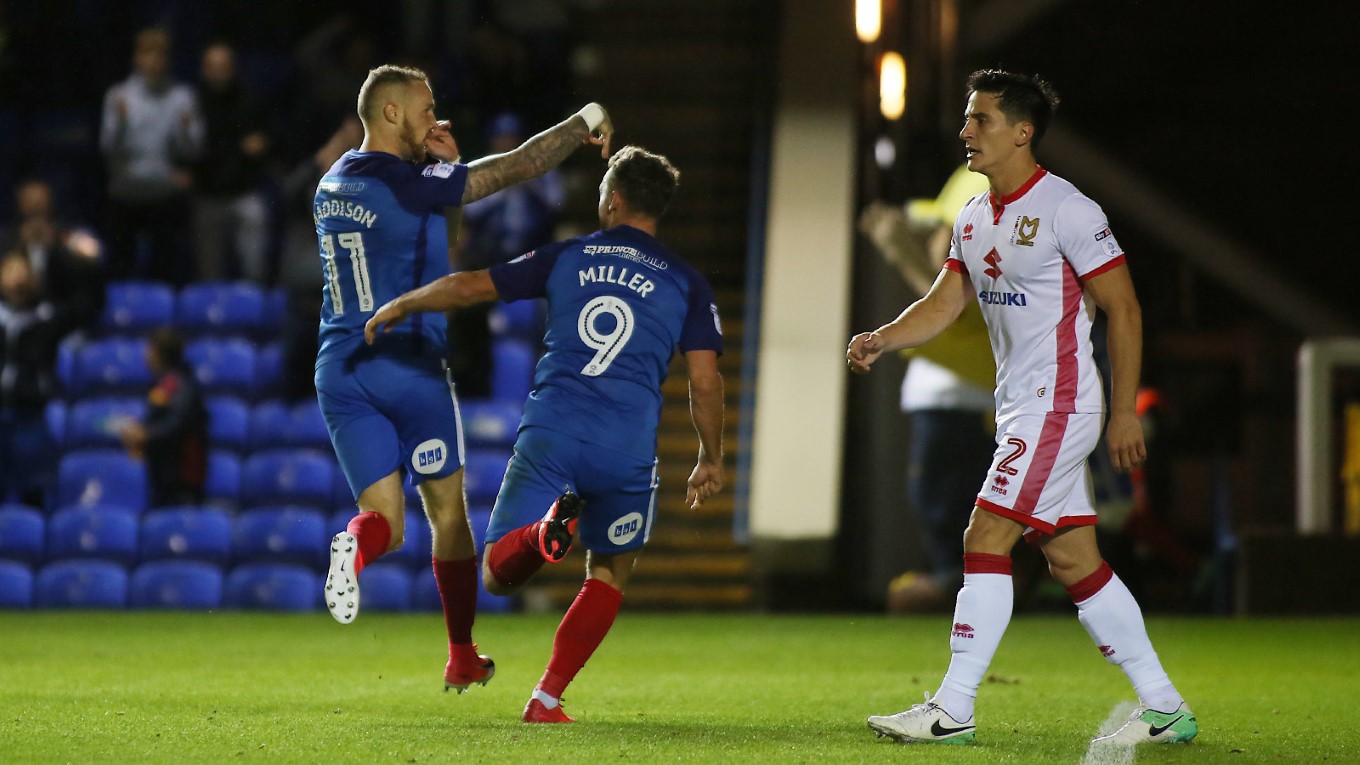 Peterborough United bounced back from their first league defeat of the season on Saturday to produce a comfortable 2-0 victory over Milton Keynes Dons at the ABAX Stadium with Ryan Tafazolli and Marcus Maddison on target.

Gwion Edwards saw a deflected effort superbly pushed around the post by goalkeeper Nicholls on 11 minutes as Posh tried to get their noses in front against the Dons. Ryan Tafazolli nodded a Maddison corner kick over the top on the quarter hour mark after good trickery and wing play from Edwards down the left.

Liam Shephard cracked a free-kick well wide of the target after good work to win a free kick from Ricky Miller. Maddison showed good trickery on 27 minutes to beat his man, but his right-footed effort was straight down the throat of Nicholls.

Taylor flicked a Maddison free-kick wide of the far post on the half hour mark after a sustained spell of pressure from Grant McCann’s men. Bond was well positioned to deny Gilbey and moments later Nicholls was required to beat way a fierce drive from Edwards.

One minute of added time was signalled by the fourth official, but it passed without incident. The deadlock was broken moments after the re-start as a wonderful set-piece delivery from Maddison was met powerfully by TAFAZOLLI who planted a header past a statuesque goalkeeper.

Miller had the ball in the back of the net moments later after Edwards flicked on a Shephard cross, but the offside flag cut short the celebrations. Nicholls then did well to parry a fierce Marriott shot as Posh piled forward.

Posh made it 2-0 on 52 minutes and it was wonderful from Marcus MADDISON who drove at the defence at pace and curled a low shot into the bottom corner past the despairing dive of goalkeeper Nicholls.

The Dons made a triple substitution moments later with Dean Lewington among those to be replaced to ironic cheers. Gilbey saw a shot deflected over the bar as the Dons found a bit of space in midfield.

Forrester was denied at the near post by the legs of Nicholls on 61 minutes after a low cross from Marriott before Gilbey saw another shot blocked. Marriott saw a goalbound shot deflected into the arms of Nicholls as Posh tried to find a third goal.

Marriott tested Nicholls with a low effort after linking well with Miller before Posh looked to make a few changes. Leo Da Silva Lopes replaced the excellent Edwards on 77 minutes. Da Silva Lopes then came close to scoring an unbelievable solo effort, but his final shot was saved by Nicholls.

Bond produced a fine stop to deny Williams on 89 minutes before four minutes of added time was indicated by the fourth official.