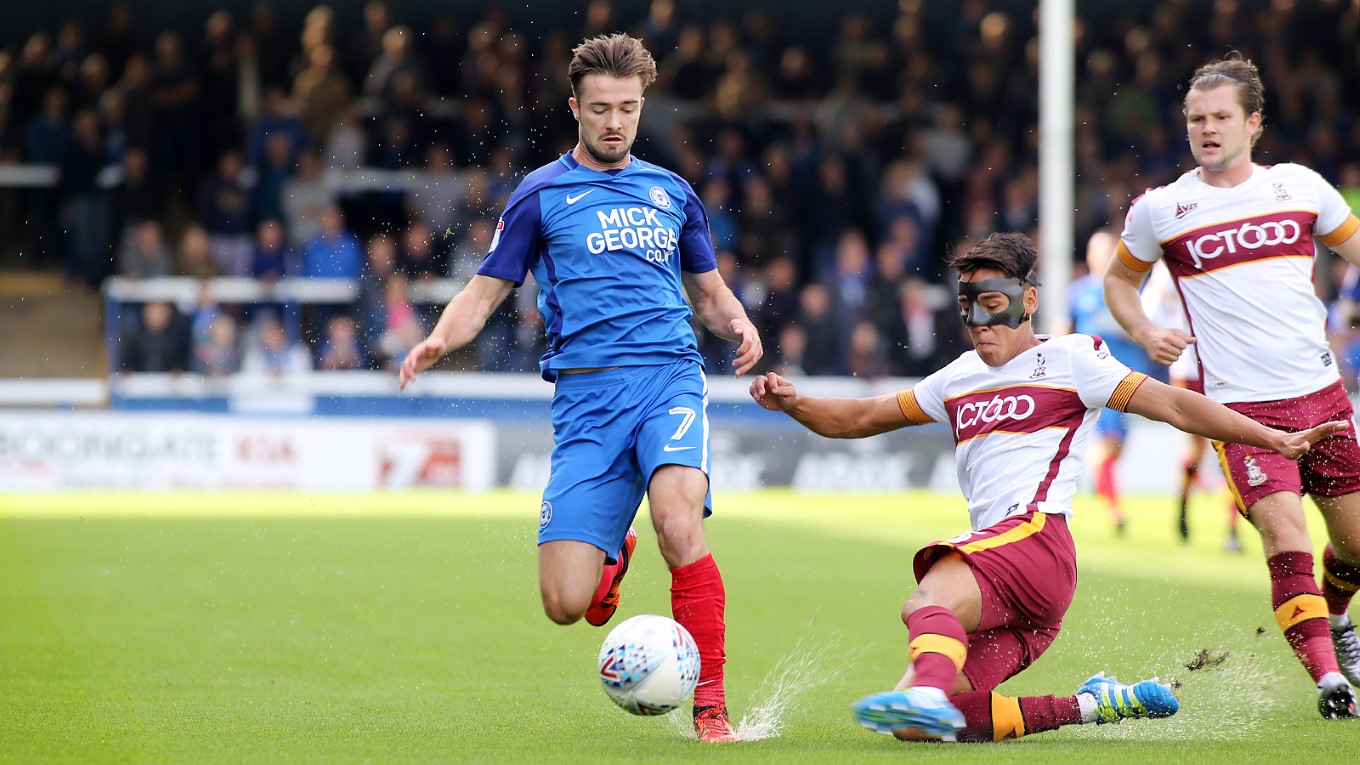 Peterborough United were beaten this season in the league for the first time as Bradford City put in a dominant first half performance at the ABAX Stadium, scoring three times without reply and despite a spirited response in the second period, Grant McCann’s men couldn’t fight back to earn a share of the spoils.

Both sides ended with 10 men for second yellow cards as referee Keith Stroud put himself back in the spot-light following a high profile error. Jack Baldwin did manage a consolation for Posh but that is all they had to show for an excellent effort in the second 45 minutes.

Jonathan Bond made a superb stop on three minutes to keep out a downward header from Jake Reeves as the visitors made a bright start at the ABAX Stadium which withstood a huge deluge of rain on two separate occasions ahead of kick-off.

The visitors opened the scoring on eight minutes as a left-wing cross was dropped under pressure by Bond at the feet of POLEON who made no mistake on the turn. Tafazolli twice saw efforts blocked and then Maddison saw an effort blocked as Posh made a quick response.

Marriott saw a low effort well held by goalkeeper Doyle after a slick Posh counter-attack, which began with Maddison toe-ending the ball past Gillead who was booked by referee Keith Stroud moments later.

Marriott saw an effort from 25-yards fumbled by Doyle but Da Silva Lopes’ follow-up took a deflection and fell kindly for the keeper. Tafazolli then saw an effort cleared off the line by Law after Taylor had nodded a deep Maddison corner back across goal.

Maddison had the crowd on their feet on 24 minutes after an outrageous bit of skill to beat his man, he then attempted a delicate chip, which fell just over the crossbar. Doughty was cautioned for a foul on Vincelot on 28 minutes.

Maddison tested Doyle with a swerving effort on the half hour mark, but the keeper was up for the challenge. Vincelot glanced a header wide from an in-swinging free-kick from McMahon on 32 minutes as the rain began to fall again.

Bradford got the second goal they probably deserved on 35 minutes as VINCELOT met a cross into the box and diverted his effort low into the bottom corner. It was 3-0 on 40 minutes as another inch-perfect centre from McMahon was powered home by centre back KILGALLON.

Posh made a double change at the break with Jermaine Anderson and Andrew Hughes introduced for Tafazolli and Doughty. Morias saw a well-struck volley cleared off the line by Kilgallon before Edwards fired into the side-netting on 58 minutes.

Ricky Miller was booked for diving an in the ensuing melee, Grant and Morias were both yellow carded. Doyle did well to hold a right-footed effort from Maddison on 68 minutes after a good turn of pace from the winger.

On 70 minutes, Posh grabbed a goal as BALDWIN did well to fire low into the bottom corner as Bradford failed to clear a ball into the box from Maddison. Maddison sent a free-kick wide of the target on 76 minutes after Edwards was upended 30-yards from goal.

Law sent a curling effort wide of the target on 80 minutes as Baldwin could only head half clear from a corner kick. Anthony Grant was red carded for a second yellow on 87 minutes for deliberate handball.

Chicksen immediately followed him down the tunnel for a second yellow for a crunching tackle on Edwards. Six minutes of added time was indicated by the fourth official.