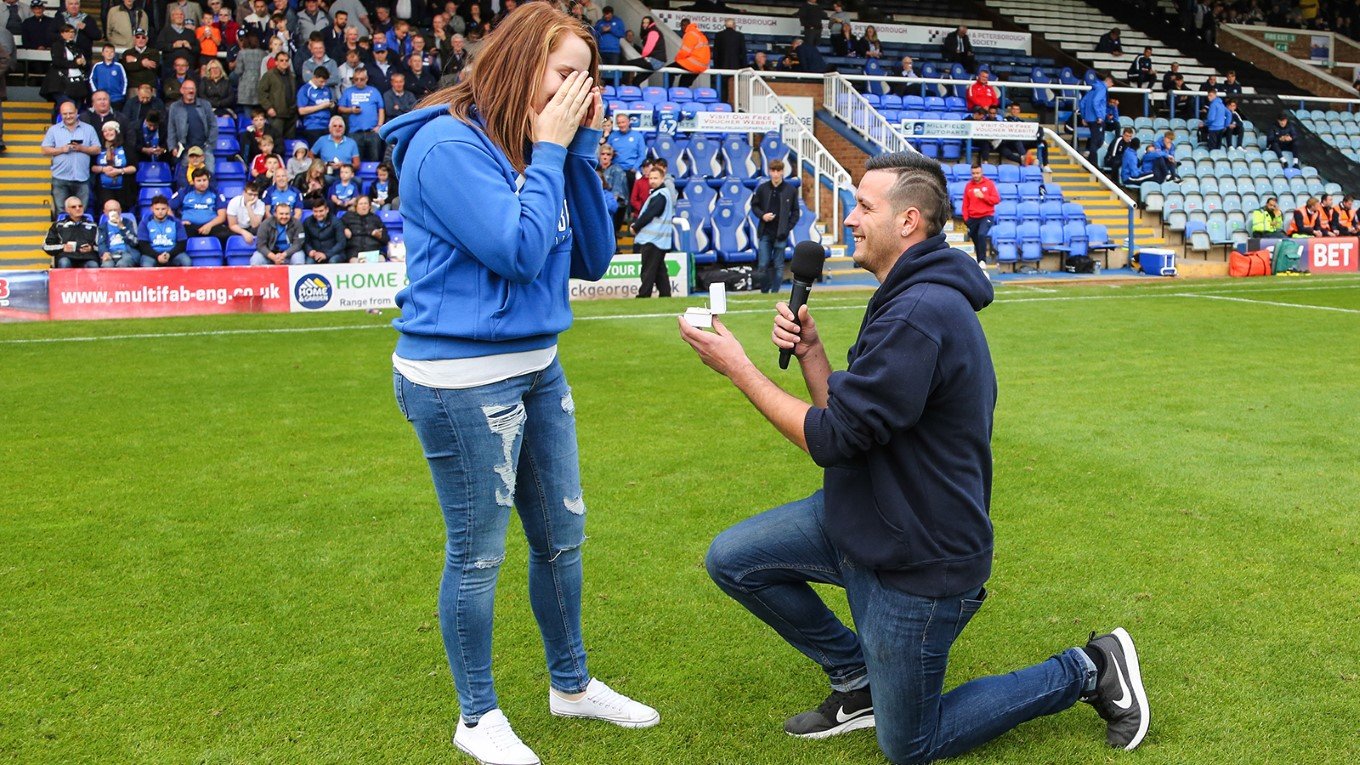 Anthony Tomlinson proposes during the half-time interval at the ABAX Stadium.

As a football club, we try and help in as many ways as we can, so when we were approached by 26-year-old Anthony Tomlinson about popping the question to his partner during the half-time interval of Saturday’s game with Wigan Athletic, we were happy to oblige.

Happily partner Yasmin Black (24) ignored the witty chorus of ‘you don’t know what you’re doing’ from some of the Posh faithful to accept a marriage proposal and it was a happy end to six months of secret planning by Anthony.

Posh stadium announcer Dave Fuller took control of the mission to keep Yasmin in the dark until the last moment and devised a clever ruse involving a spoof game of TV quiz ‘Mr & Mrs.’ Anthony explained: “I’ve been with Yasmin for 18 months and decided to go for a surprise proposal about six months ago. I wanted the experience to be unforgettable for us both.

“I had intended to propose at a music festival and the organisers were all on board, but then decided they wanted to charge me £600! I wasn’t happy about that so I switched my attention to a football match and Posh couldn’t have been any more helpful.

“They agreed to help straight away and Dave Fuller thought up the ‘Mr & Mrs’ idea. He pretended to pick us out at random to quiz us on who knew the most about the other person. He then got me to ask the first question so I went down on one knee and asked Yasmin to marry me. Luckily for me she looked delighted and said ‘yes’ straight away. It was a great moment for us both.

“I was born and bred in Peterborough and always try and get to a game when I come home. I took Yasmin to a match last season against Sheffield United and that didn’t go too well, but after my proposal the team started to play really well and the fact we won such a great game made it that little bit more memorable. I had my dad and my brother present. Dad was in on everything. He had to smuggle the ring in for me.”

Club Press Officer Phil Adlam said: “Anthony got in touch about 10 days ago and explained what he wanted to do and we were happy to help. The only thing we couldn’t guarantee was that Yasmin would say yes, but happily she did! On behalf of everyone connected with the football club, we wish them a lifetime of happiness.”

Anthony, a chef, and Yasmin, a nanny, live in Brighton, but he still keeps a keen eye on the results of his hometown team.