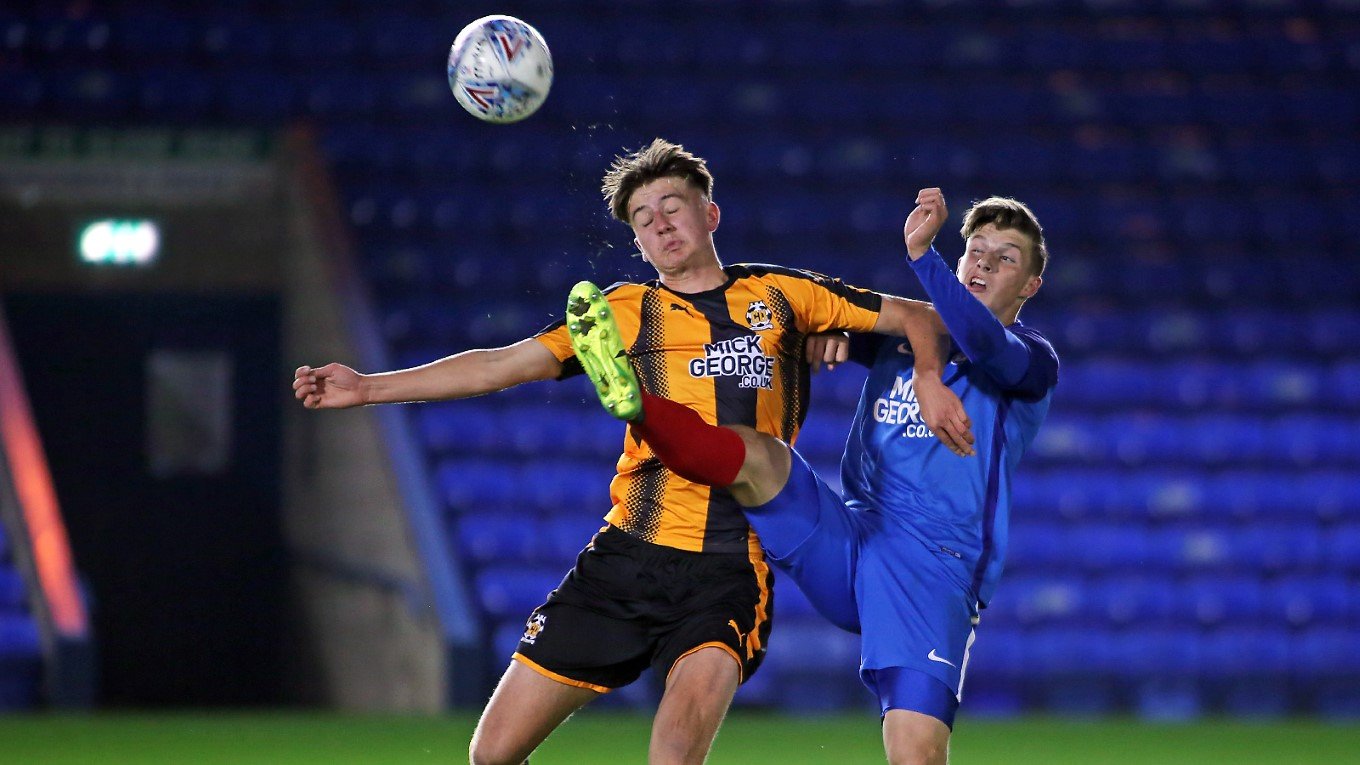 Peterborough United were beaten by Cambridge United in the first round of the FA Youth Cup with the visitors securing a passage into round two of the competition and a home tie in the next round following a hard fought 2-1 success at the ABAX Stadium, which was secured in the opening moments of extra-time.

Josh Davison dragged an early left-foot shot wide of the target after linking with Idris Kanu following a long clearance from Frazer Garner. Burrows then tested Iron with a decent effort from long-range which the goalkeeper did well to hold as Posh tried to get themselves in control in the opening moments of the tie.

Iron was well placed to deny a low free-kick from Burrows on the quarter hour mark after Davison had been fouled following an aerial duel. Kanu stabbed wide following a low Borg free-kick on 20 minutes after the Malta under 19 international had been felled after a piece of trickery to get past his man.

Kanu struck a free-kick into the wall after Borg had been felled with Barker firing the rebound well over the crossbar. Shaw entered the referee’s book for the foul on Borg and Garner followed him after a foul at the other end.

Norville-Williams, sporting what can only be described as a haircut that needs work, dragged a free-kick wide of the near post for the visitors after Borg was penalised for a foul. Kanu did well to beat his man in the box on 37 minutes, but he skied his left-foot shot from a tight angle.

Kanu was superbly denied from close-range by Iron on 42 minutes after a good dink into the box by Strachan with the rebound sailing over the bar as it came straight back at the former Aldershot man. Cambridge made a change at the break with Sam Bennett replacing Jake Battersby.

Lewis Elsom made his first challenging stop of the evening on 51 minutes to deny a fierce effort from the substitute Battersby as the visitors came close to a breakthrough. The deadlock was broken on 56 minutes and it was the lively substitute BENNETT who grabbed the goal, quick on the rebound after Elsom had made a good stop to deny a powerful drive from Hasani.

David Farrell introduced Jack Gurney for Burrows in the first change on the hour mark. It made an immediate impact, GURNEY’S free-kick from near the touchline was well whipped and flighted into the box and seemed to take a nick off a defender before nestling in the far corner.

Strachan nodded another fine Gurney free-kick over the bar on 66 minutes. Elsom was well positioned to pluck a curler from Neal out of the air as the game entered the final 20 minutes. Freestone and Hasani exchanged shots off target as the tie became a little stretched.

Garner headed a late chance over the top as Posh tried to find a winner but extra time was looming. Shackleton dragged a shot wide before the tie moved into 30 minutes of extra time. Harry Brookes replaced Strachan in the final Posh change.

Cambridge got their noses in front a minute into extra time, Elsom with a fine save to deny Michael but he could do nothing to prevent another substitute BENNETT from firing home the rebound for his second goal of the evening.

Shackleton curled an effort straight into the arms of Iron after winning the ball from the full-back as Posh pressed again. Worman was denied by Elsom with eight minutes remaining as the U’s came close to a third.

Kanu fired over on the half volley moments later after linking well with Shackleton. Gurney was denied by Iron late on after his initial free-kick was blocked.