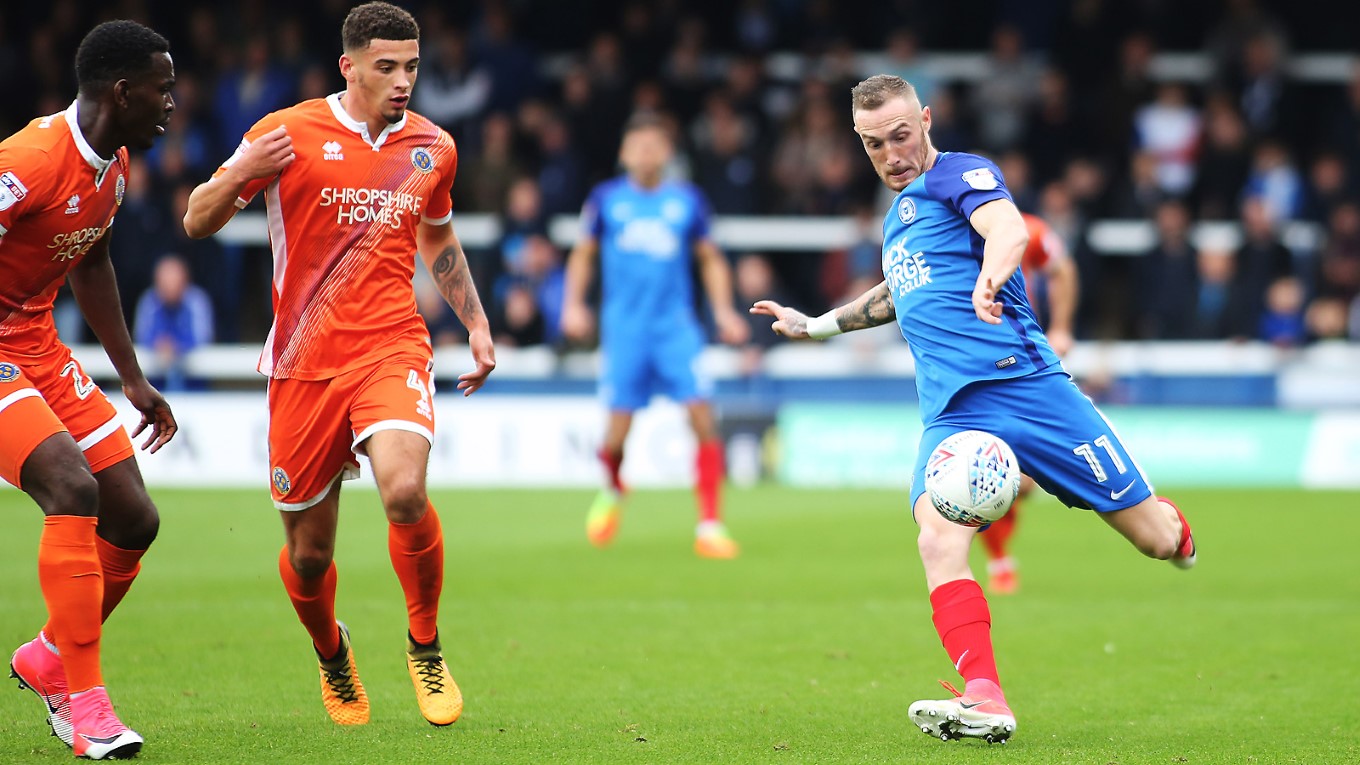 A moment of magic from Marcus Maddison and some wonderful last ditch defending earned Peterborough United a 1-0 win over previously unbeaten Shrewsbury Town after a tense clash at the ABAX Stadium.

After a quiet start, the game flew into life with an absolute wonderful piece of individual skill, awareness and technique as Marcus MADDISON sent a stunning half volley into the back of the net from close to the half-way line past a back peddling Henderson who was left with no chance.

Goalkeeper Jonathan Bond produced a fine stop to push a header from Carlton Morris around the post on 17 minutes after Baldwin had been penalised for a foul. Maddison was booked for deliberate handball on the halfway line moments later as an over-hit pass was struck in his general direction.

Marriott saw a volley superbly blocked on 22 minutes after collecting a throw-in from the left by Hughes. Maddison saw a rasping drive well held by Henderson after a strong press from the Posh front players to put the league leaders under pressure.

Edwards saw a fierce shot beaten away by Henderson on 31 minutes after strong running and hold-up play by Marriott. Whalley saw a rare effort at the other end roll past the post from 25-yards as the Shrews began to assert themselves again.

Bond was well placed to deny a looping effort from Nsiala on 36 minutes before a pacy run from Da Silva Lopes was ended with a fine Beckles tackle. Edwards went into the book for a late tackle on Whalley.

Whalley was cautioned for a foul on Hughes on 48 minutes. Nolan followed him into the book for a crunching tackle on Maddison on the halfway line. Ogogo was next to be cautioned after a foul on Marriott by the touchline.

Henderson did well to deny Marriott after Doughty’s initial shot was blocked as the hour mark approached. Godfrey was cautioned for dissent on 63 minutes as Tafazolli received more treatment for a head wound.

Anthony Grant was cautioned for a foul moments later as he tried to lead an ambitious high press from midfield. The visitors made a double change on 70 minutes with Stefan Payne and Bryn Morris introduced.

Tafazolli was cautioned for a late challenge on 73 minutes. Posh made their first change with 10 minutes to go as goalscorer Maddison was replaced by Jermaine Anderson. Bond did well to beat away a low drive from Nolan on 86 minutes.

Marriott saw a late effort parried by Henderson before Edwards saw a goalbound effort blocked as the game went into a mammoth six minutes of injury time. Henderson made a superb block to deny Edwards on the counter attack as Posh came close to a second.