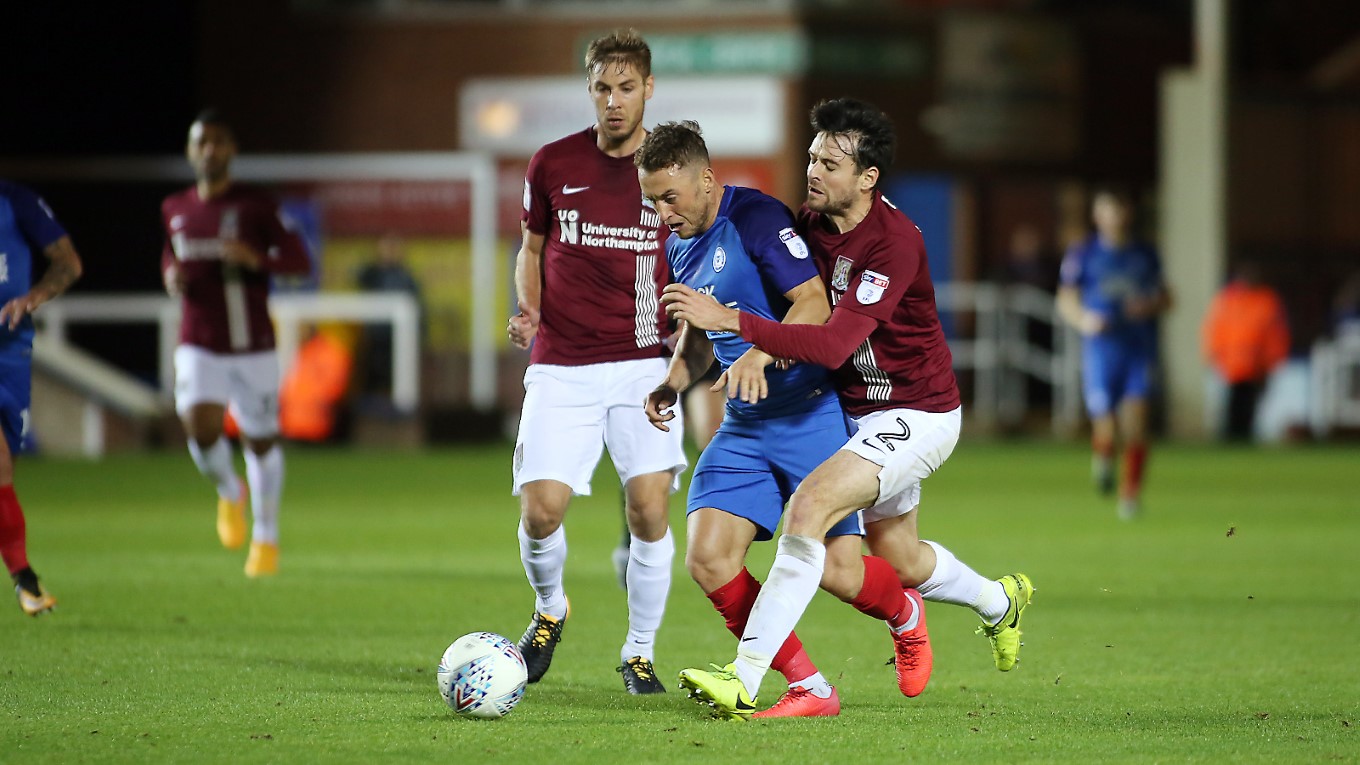 Peterborough United were beaten 4-2 on penalty kicks by Northampton Town at the ABAX Stadium after a hard fought 1-1 draw in the 90 minutes as Grant McCann’s men moved on to four points in the competition ahead of the final fixture at Cambridge United in November.

Young goalkeeper Conor O’Malley did well to deal with a long-range Lewis McGugan effort that took a deflection as the visitors, kicking towards the London Road End, registered the first shot on goal.

Kanu saw a shot blocked after a decent pass from Lloyd and from the resulting set-piece, Cornell did well to beat away a Tafazolli header. Grant saw a shot blocked on the quarter hour mark before the same player was penalised for a high boot and was cautioned by referee Gavin Ward.

Lloyd saw a free-kick beaten away by Cornell on 18 minutes as Posh continued to press for the breakthrough. Lloyd saw a low strike from long-range go wide of the target, but the former AFC Fylde man was certainly keen to get on the ball and show what he can do.

Miller floated a free-kick over the bar on 29 minutes after he himself had been felled 25-yards from goal. Doughty was next to try his luck, he took an excellent first touch to control a difficult ball forward before curling wide with his left-foot from 25-yards.

Shephard saw a cross tipped over by Cornell with some difficulty on 38 minutes. Miller was cautioned for diving on 40 minutes as he rounded the keeper much to the dismay of the former Dover Athletic front man.

The deadlock was broken two minutes before the break, Conor O’Malley with a fine clearance to Miller, he cut inside onto his left-foot and saw his fierce drive parried by Cornell into the path of a grateful LLOYD who fired home his first competitive Posh goal.

Waters was booked for bringing down Doughty on 49 minutes by referee Mr Ward. Lloyd saw a well struck free-kick pushed around the post by Cornell after Kanu had won the set-piece with a fine bit of skill in a tight area.

Grant McCann made his first change on 66 minutes with top scorer Jack Marriott replacing Miller in attack. The visitors made two changes in quick succession to try and get back into the game with Matt Grimes and Dean Bowditch coming on.

O’Malley somehow tipped a fierce Richards drive onto the crossbar but from the resulting set-piece, the Cobblers were level as the ball bounced off Baldwin at the back post and into the back of the net.

Marriott fired wide after confusion at the back for the Cobblers on 80 minutes before the same player was flagged offside when in an onside position from a Lloyd pass. Lloyd saw a strong run and shot tipped over by Cornell on 85 minutes.

Richards powered a header over at the near post as we approached four minutes of added time. Nobody forced a winner in normal time so the game went to a penalty shoot-out to decide who gets the extra point in this competition.