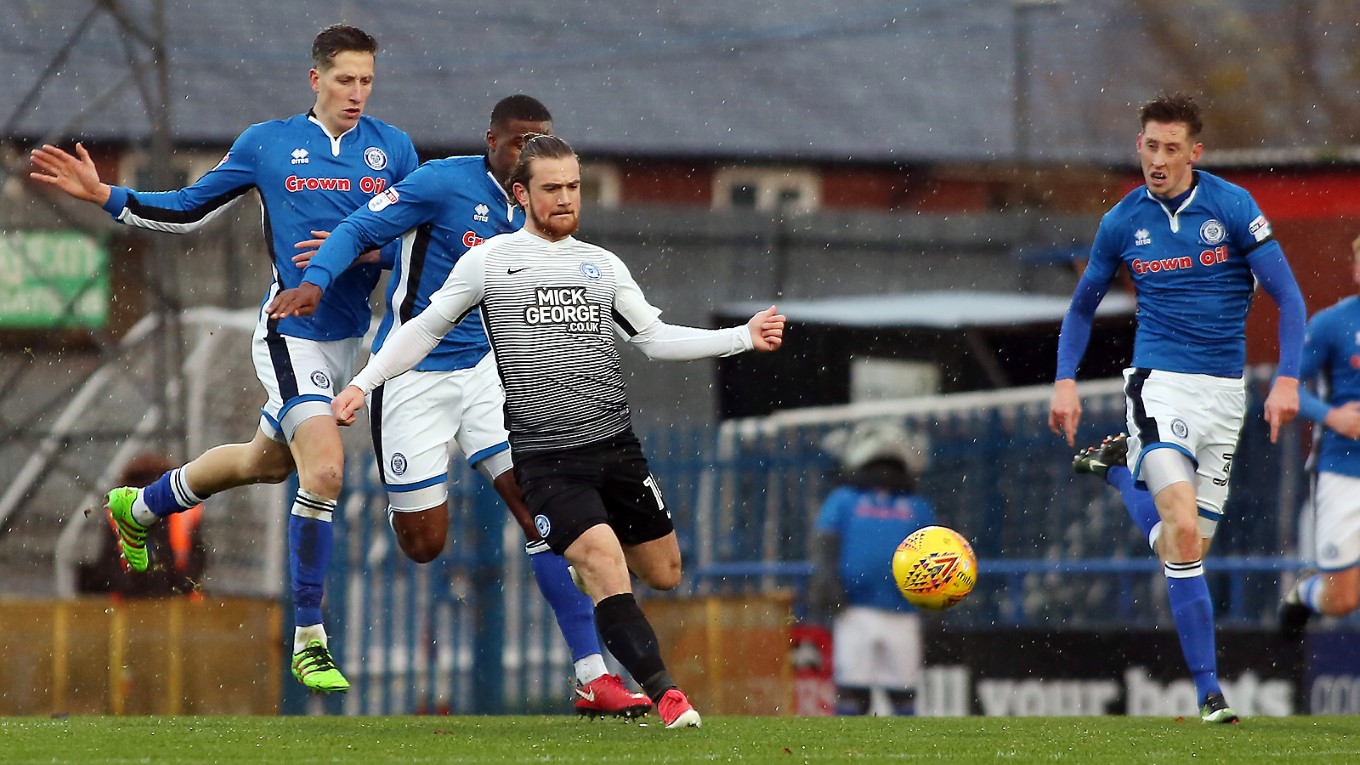 Match report for Rochdale vs Peterborough United on 25 Nov 17

Two goals in the first half see Posh drop down to eighth in the Sky Bet League One table.

Peterborough United slipped to a 2-0 defeat the Crown Oil Arena against Rochdale with two goals in the first half condemning Grant McCann’s men to a frustrating defeat.

The home side were dealt a blow on seven minutes with Matt Done replaced by Jordan Slew, the former Sheffield United man limping out with what appeared to be a lower back injury. Calvin Andrew nodded a header wide of the upright moments later after a driven cross into the box.

Posh felt they should have been awarded a penalty kick on 18 minutes when Maddison was upended in the box by Rathbone, but the referee waved away the protests. Slew was cautioned for a foul on Doughty before Andrew fired well over the bar from 25-yards.

Maddison was denied at the near post by Lillis after a swift Posh counter-attack led by Marriott. Grant McCann’s men fell behind on 32 minutes as ANDREW did well to turn his man and curl past O’Malley from around 10-yards.

The lead was doubled on 36 minutes as CAMPS fired a free-kick into the net after Bunney had been upended by Da Silva Lopes on the edge of the penalty area. Lloyd fired wide from distance on 43 minutes after a poor defensive header from Henderson. Two minutes of added time was signalled by the fourth official.

Grant McCann made a triple substitution at the interval with Chris Forrester, Idris Kanu and Ricky Miller introduced for Doughty, Lloyd and Anderson. Lillis made a decent stop to deny Kanu after he met a Da Silva Lopes cross with a first time effort.

Henderson scooped an effort over the bar from a corner kick on 61 minutes. Rathbone was finally cautioned on 66 minutes after about his fifth foul of the game. Miller saw a right-footed shot gathered by Lillis by his near post on 73 minutes after being picked out by Da Silva Lopes.

O’Malley did well to beat a curling Henderson effort wide of the target on 77 minutes. Forrester had a go at the other end on 79 minutes but his deflected effort was comfortable in the end for Lillis. Miller fired straight at Lillis after a neat one two on 85 minutes.