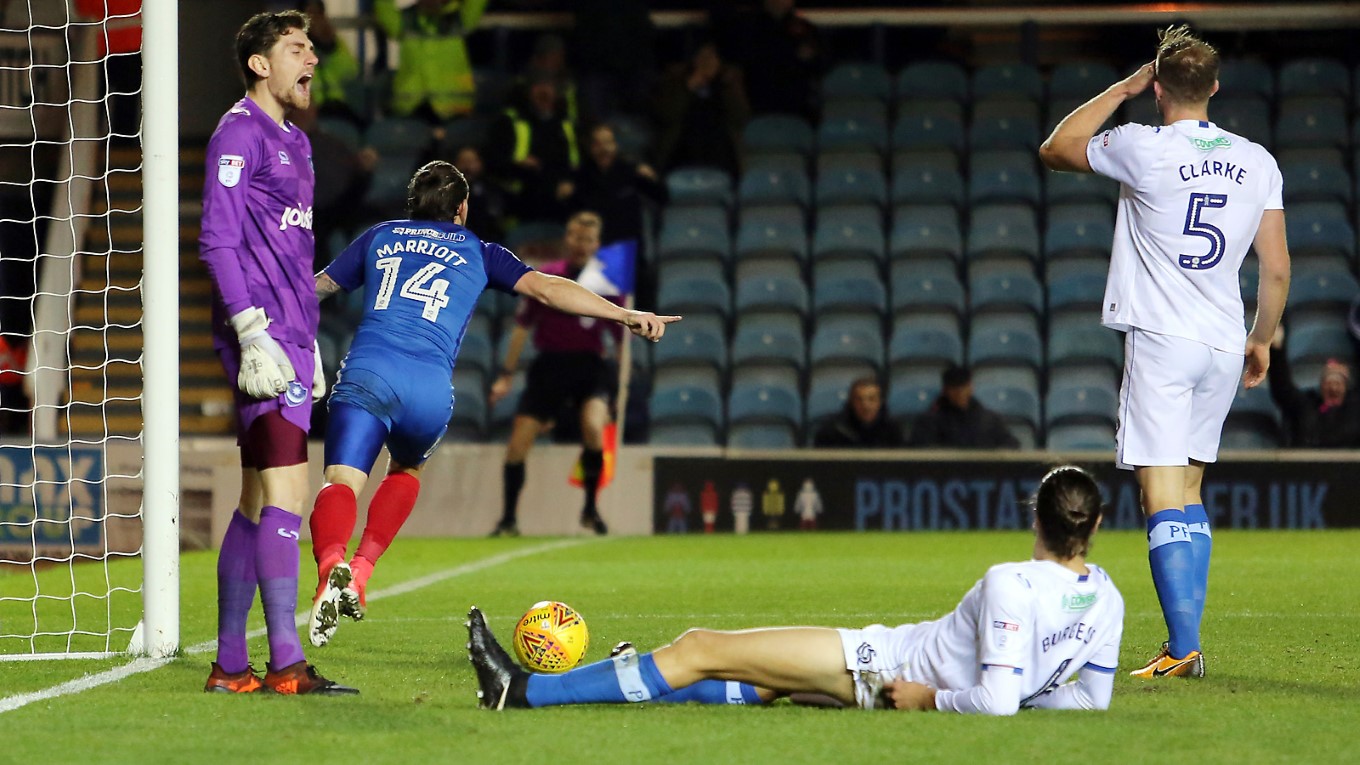 Match report for Peterborough United vs Portsmouth on 21 Nov 17

Posh close the gap on the sides above them in the league table with a fine 2-1 win over Portsmouth at the ABAX Stadium.

Peterborough United bounced back from Saturday’s defeat to Blackpool with a fine 2-1 victory over Portsmouth at the ABAX Stadium with Jack Marriott and an own goal securing all three points for Grant McCann’s men.

Michael Doughty sent an early shot over the crossbar from long-range after being picked out with a throw in on the far side. Naismith fired wide from distance at the other end after two successive corners caused a bit of panic in the Posh back-line.

Anthony Grant sent a shot over the Motorpoint Stand from 35-yards on six minutes after Edwards couldn’t force him a corner from Maddison. Posh were a whisker away from opening the scoring on 17 minutes as Lloyd picked out Edwards in space, but the crossbar came to the rescue of Pompey with McGee beaten.

Marcus Maddison saw a deflected left-footed shot tipped around the post by McGee by his near post after a swift Posh counter attack led by Danny Lloyd. Curtis Main clipped the outside of the post for Portsmouth on 31 minutes after a delightful flick from Naismith.

Grant McCann made a change at the break with Andrew Hughes replacing Ryan Tafazolli. Anthony Grant was cautioned by referee Craig Hicks for a foul that seemed to impair the Posh midfield man as he made contact with Kennedy.

Goalkeeper O’Malley produced a fine stop to push a fierce drive from Naismith around the post on 53 minutes after the Portsmouth man found a bit of space 25-yards from goal. The deadlock was broken on 57 minutes and it was a superb team goal, Lloyd with a bit of skill to create a bit of space and his pass to Maddison was the catalyst, Maddison with a superb delivery and MARRIOTT was there to fire home from close-range for his 13th goal of the season.

Taylor fired a volley over from a Maddison corner kick on 64 minutes as Posh tried to take advantage of the boost in confidence given to them by that Marriott goal. Burgess was booked for hacking down Maddison moments later.

The lead was doubled midway through the second period as a wonderful Maddison free-kick was glanced past his own keeper by the unfortunate Matt CLARKE. Grant immediately headed a Chaplin shot off the line before Marriott dragged a shot wide of the far post.

Portsmouth halved the deficit on 77 minutes as substitute CHAPLIN stabbed home from close-range after O’Malley could only parry a Lowe left-footed shot. Dion Donohue replaced Kennedy on 80 minutes as Kenny Jackett made his second change of the evening.

Jermaine Anderson replaced a limping Maddison on 84 minutes as Grant McCann made his second change of the night. Edwards was booked for a robust challenge a minute later in midfield, his fifth of the season so he will miss the trip to Rochdale on Saturday.

Marriott fired over from just inside the box as the fixture moved into four minutes of stoppage time.