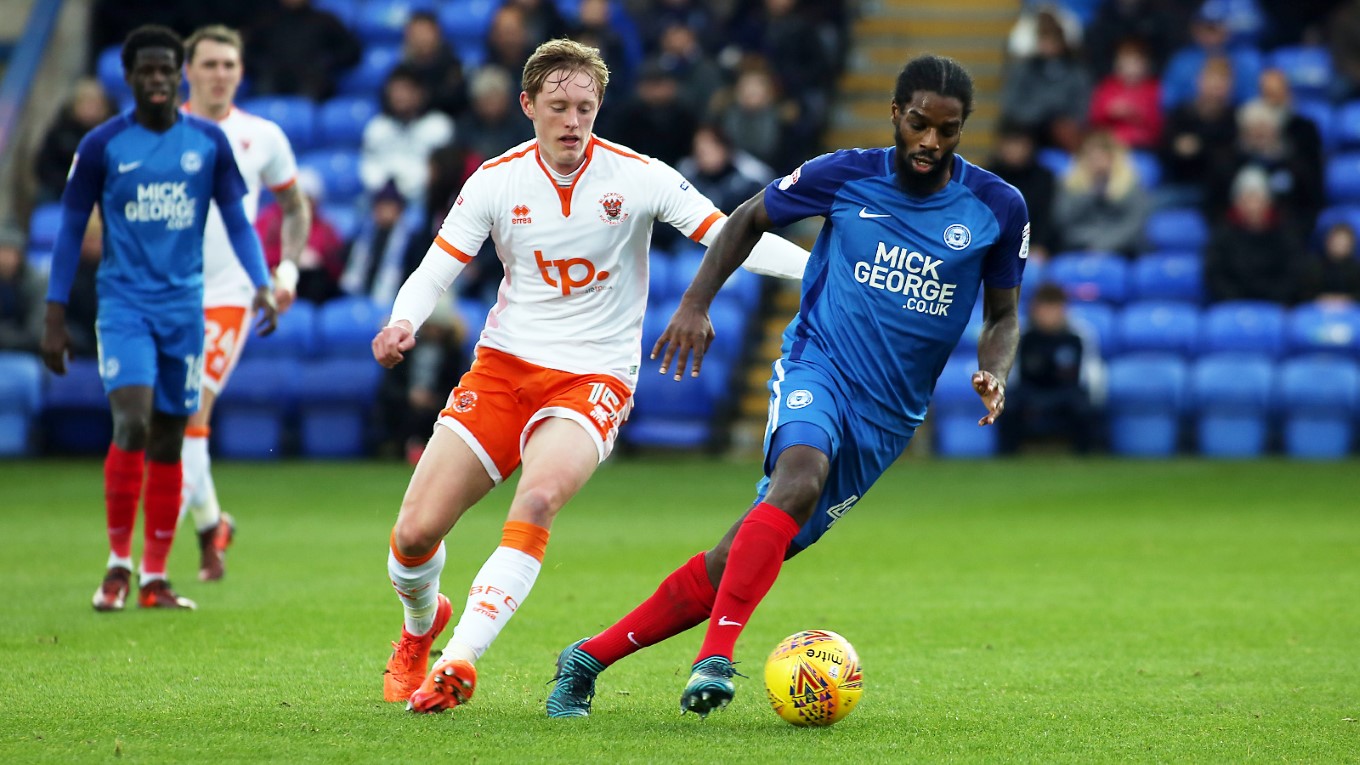 Match report for Peterborough United vs Blackpool on 18 Nov 17

Peterborough United gave it their all, particularly in the second half, but suffered a 1-0 defeat to Blackpool at the ABAX Stadium.

Peterborough United suffered their first defeat in six games in all competitions after a frustrating 1-0 defeat to Blackpool at the ABAX Stadium with a deflected first half effort from Kyle Vassell proving the difference between the two sides.

The home side were desperately close to breaking the deadlock inside the opening two minutes as a towering header from Aimson beat O’Malley but not Da Silva Lopes on the line who made a fine clearance with his head.

Vassell then fired straight into the wall with a free-kick after Doughty was adjudged to have tugged back the shirt of the former Posh man. Meller fired well wide of the near post from distance for the Tangerines as the quarter hour mark approached.

Posh carved out a fine opportunity for Jack Marriott on 16 minutes after a wonderful turn from Maddison and cross from Da Silva Lopes produced the chance, keeper Allsop doing well to parry the ball to safety.

The visitors got their noses in front on 21 minutes and it was former Posh man VASSELL with it, his right-foot shot took a huge deflection and looped into the net. Marriott fired wide from an acute angle on 23 minutes after linking well with Maddison and Doughty.

Marriott saw a shot from distance go just wide of the near post on 32 minutes after linking with Hughes. Doughty was superbly denied by the fingertips of Allsop moments later as Posh forced successive corner kicks.

Taylor guided a header wide of the upright on the near side on 35 minutes after another good Maddison delivery. Tafazolli was cautioned by referee Mr Kettle for a late tackle as Solomon-Otabor fired wide at the back post.

Aimson glanced a header over the crossbar from a corner kick on 40 minutes. Marriott was denied by Allsop by his near post on the stroke of half-time after he was picked out superbly by Maddison before two minutes of added time was indicated by the fourth official.

O’Malley made an important stop in injury time, turning a fierce drive from Longstaff around the post. Grant McCann made a substitution at the break with Gwion Edwards replacing Baldwin as Posh made a change in formation.

O’Malley pushed away a Solomon-Otabor effort moments after the interval as Blackpool came close to catching Posh on the break. Substitute Gwion Edwards should have levelled on 52 minutes as a wonderful piece of wing play from Maddison saw him stand up a fine cross for the Welshman, he powered his header over.

Longstaff drilled a shot from distance well wide of the target as he found some space 25-yards from goal. On 56 minutes, O’Malley did well to gather a low shot from Cooke and Posh responded by introducing Idris Kanu for Lloyd and 10 minutes later Jermaine Anderson replaced Doughty.

Edwards headed over from a Maddison corner kick on 68 minutes. Turton was booked for a quite blatant foul on Maddison as the game moved into the final 20 minutes. Longstaff was a whisker away from a second goal on 77 minutes, his curler from 20-yards went just wide of the post with O’Malley beaten.

Anderson wasted a good chance deep into stoppage time after a fine knock down from Tafazolli as a frustrating afternoon came to an end at the ABAX Stadium.