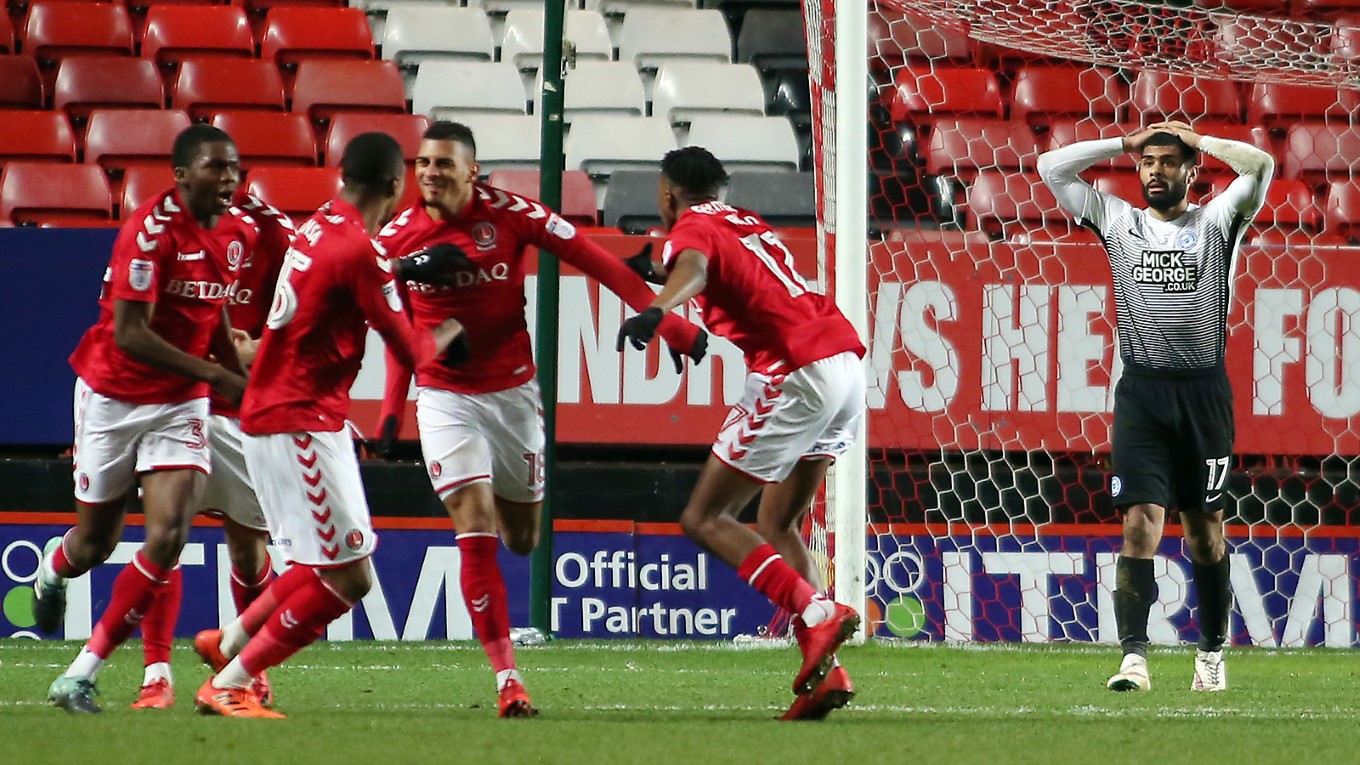 Two late goals earn Karl Robinson's men a share of the spoils following a lively encounter at the Valley.

Peterborough United were left robbed at the Valley as Charlton Athletic came from 2-0 down to claim a late point with two stoppage time strikes, one of which was a controversial penalty kick converted by the lively Ricky Holmes.

Earlier in the game Edwards was not awarded a penalty kick in simiilar circumstances and boss Grant MCann was fuming with the match officials following the final whistle.

It was a lively start to the game at the Valley with both sides creating wonderful chances in the opening five minutes, first Anthony Grant was in the right place at the right time to head a powerful drive from Ricky Holmes off the line and then Marcus Maddison was denied by keeper Amos after linking superbly well with Andrew Hughes

Posh had an even better opportunity to break the deadlock moments later as a huge Bond clearance was flicked on by Da Silva Lopes into the path of Jack Marriott, but with only the keeper to beat, he couldn’t force the ball past Amos who made a good stop.

However, the deadlock was broken on 11 minutes as a wonderful Maddison free-kick was fired home at the back post by Gwion EDWARDS who followed up his goal of the season at the Valley last term with a simpler finish.

Goalkeeper Jonathan Bond then took centre stage, producing a fine double stop from Josh Magennis and then Mark Marshall, although the latter was flagged offside. Marshall was denied by Bond at the back post on 22 minutes as the Addicks made a spirited comeback.

Da Silva Lopes saw a shot deflect wide and Hughes saw a shot blocked as Posh threatened at the other end with Amos uncomfortably beating away a fierce Marriott drive from 20-yards. Holmes, who was looking extremely dangerous on the left, continued to threaten with deliveries into the box but brave headers from Tafazolli and Taylor kept Posh in front at the break.

Maddison was denied a fine goal with his right-foot by a good stop from Amos before Charlton lost their skipper Bauer to injury. Penny was cautioned for a foul on Holmes on 55 minutes. On 57 minutes, Posh doubled their lead and it was a wonderful goal, Grant timing his pass to Edwards to perfection and his sublime cross was turned home at the near post for his 14th goal of the season by Jack MARRIOTT.

Posh wanted a spot-kick on the hour mark as Edwards appeared to be bundled over in the box after a wonderful run saw him beat two defenders. Hughes sent a glancing header from a Maddison free-kick wide of the far post on 64 minutes.

Charlton made a double substitution on 70 minutes with Aribo and Ahearne-Grant introduced. Edwards saw a shot cleared off the line by Forster-Caskey on 84 minutes after wonderful work from Maddison and Marriott.

On 89 minutes, Charlton were awarded a penalty kick as Edwards was adjudged to have fouled his man in the box. HOLMES stepped up and dispatched the penalty kick high into the net. Four minutes of added time was signalled by the fourth official as McCann made two changes with Ricky Miller and Michael Doughty introduced.

The Addicks found a late leveller three minutes into stoppage time as a ball was nodded across goal and AHEARNE-GRANT stabbed home from close-range.