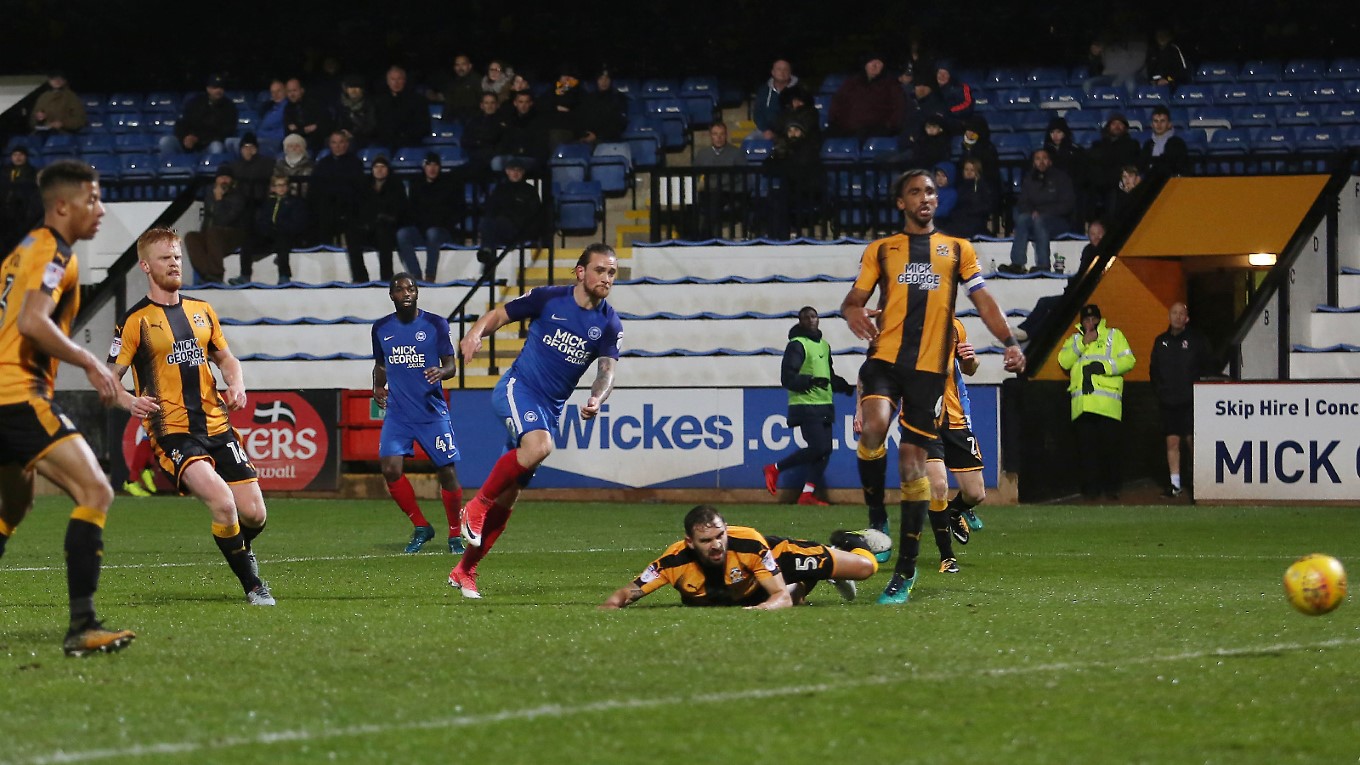 Peterborough United made it safely into the latter stages of the Checkatrade Trophy with a comfortable away success at local rivals Cambridge United with Steven Taylor and Jack Marriott netting in front of over 1,100 Posh fans behind the goal.

Ryan Tafazolli fired wide on the turn inside the opening few minutes after Carroll somehow got away, in terms of a booking, with a crunching tackle on Da Silva Lopes. Ikpeazu sent an acrobatic volley straight into the arms of O’Malley on 12 minutes after good work initially from former Posh youngster Jevani Brown.

Ikpeazu dragged a shot across goal on 22 minutes and Lewis then squandered a fine chance as the ball rolled into a dangerous area, firing wide of the far post. Lloyd fired wide at the other end after being found in the left channel by a clever Edwards pass.

Lloyd fired a free-kick into the wall after Maddison was felled 25-yards from goal. Maddison then saw a right-foot shot well gathered by goalkeeper Mitov. Top scorer Marriott forced Mitov into a fine save moments later, his shot on the turn parried clear, Grant in an offside position for rebound.

O’Malley did well to tip over a fierce drive from Lewis on 35 minutes after he was afforded time and space around 30-yards from goal. Marriott saw a curler patted down by Mitov who then gathered at the second attempt as Da Silva Lopes led a quick Posh counter attack.

O’Malley produced a fine stop diving to his left to divert a shot around the post after Taylor squeezed a shot through the crowd. Marriott fired over at the other end when he perhaps should have played in Lloyd on his left.

The deadlock was broken on 50 minutes and it was a wonderful moment in front of the Posh faithful for Steven TAYLOR who was in the right place to stab home from close-range after Marriott had fired a low cross into the danger zone following a parry from keeper Mitov to deny Doughty.

O’Malley produced a fine save from close-range to deny a powerful Ikpeazu header on 68 minutes as the home side continued to press. Grant McCann made a change on 69 minutes with Andrew Hughes replacing Da Silva Lopes.

Legge came close to scoring an own goal at the near post on 71 minutes after a Hughes cross, somehow sliced wide of the near post. Anthony Grant fired wide on 76 minutes from just inside the box.

The lead was doubled on 81 minutes, Edwards to Grant and he picked out MARRIOTT who, with the aid of a slight deflection, rifled home his 12th of the season. Elito was denied by a comfortable O’Malley stop in four minutes of added time.