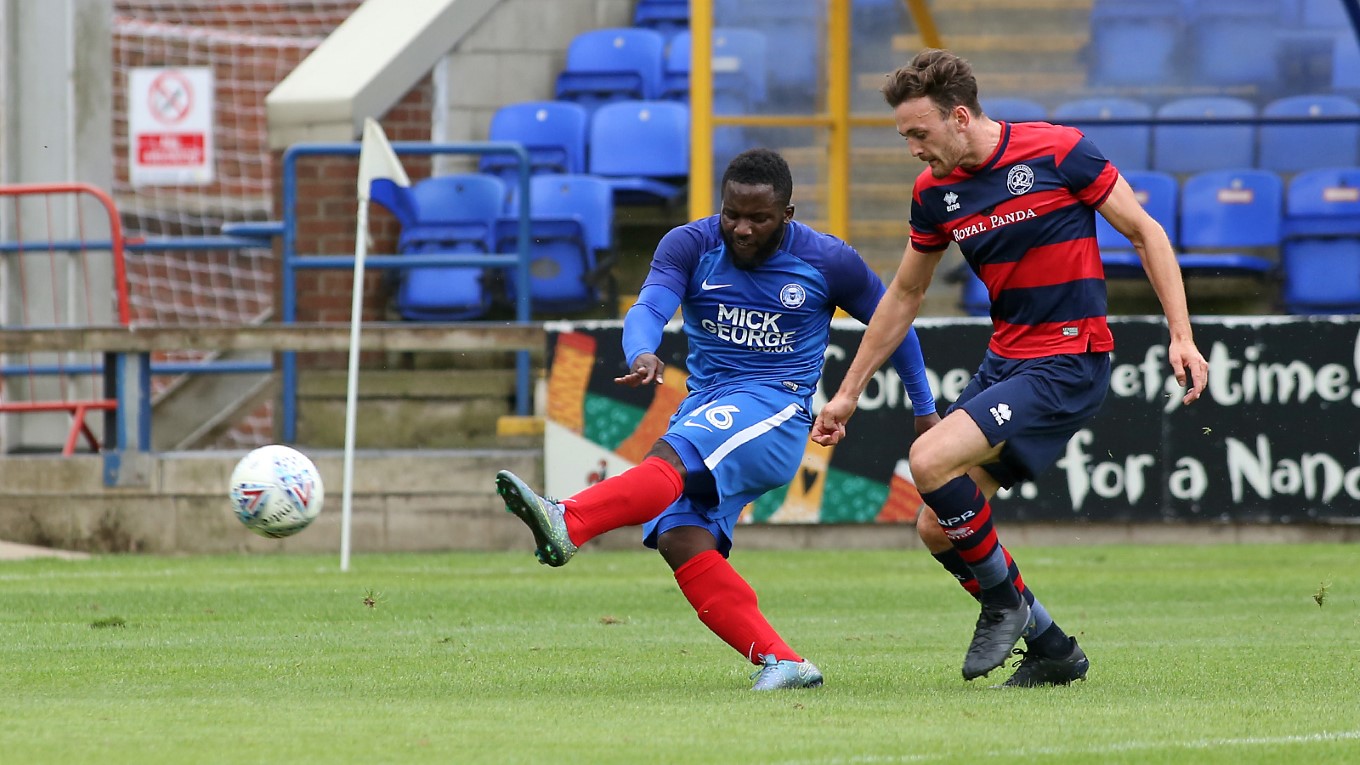 Competitive pre-season friendly at the ABAX Stadium ends in a 4-2 win for QPR.

Grant McCann’s men were beaten 4-2 by Sky Bet Championship side Queens Park Rangers following 120 minutes of football at the ABAX Stadium on Saturday afternoon with both sides producing some good football on a muggy afternoon.

Junior Morias netted twice for Posh, the second a superb curler into the top corner with his left-foot, while Ricky Miller was lively throughout his hour-long appearance. The visitors ended the contest on top and added late goals to seal the victory.

The visitors made a bright start and goalkeeper Jonathan Bond was forced into an excellent early stop, parrying a downward header from the towering Matt Smith around the post after a decent chip to the back post.

Smith then fired over from close-range after another right-wing centre before Posh were forced to play with 10 men for a couple of minutes as Andrew Hughes sustained a facial injury in a tussle with the lively Jamie Mackie.

A well worked Posh move involving summer signing Danny Lloyd and Marcus Maddison produced an opportunity for Michael Doughty against his former club, but his left-footed effort went wide of the target from 25-yards.

Less than a minute later, and the Hoops were ahead as a right-wing centre was nodded past Bond by MACKIE from close-range. Danny Lloyd saw a shot blocked and then his follow-up was crisply struck wide with his right-foot on 36 minutes.

Edwards sent a header over the top following a deep Maddison corner kick as the tackles began to fly in. Lloyd saw a free-kick well held by Smithies after Miller’s persistence had won a free-kick on the edge of the box.

Jack Marriott sent a curling effort over the top on 48 minutes after linking well with Anthony Grant. Posh were inches away from a leveller on 53 minutes as Miller showed good strength and pace to get away from his man in the left-channel, his shot beat keeper Smithies but grazed the outside of the far post.

Bond was well positioned to beat away a fierce drive from Ngbakato and was then ideally placed to deny Mackie as the first hour drew to a close. Doughty then picked out Lloyd with a clever pass, but the former AFC Fylde man couldn’t keep his volley down.

It didn’t take Posh long to level the scores, three minutes in fact as Borg was upended by Furlong in the box after an excellent run, Junior MORIAS converting the penalty. On 72 minutes, Posh got themselves in front, a wonderful pass from Nichols to MORIAS, he chopped inside his defender onto his left-foot and produced a stunning curling effort into the top corner giving the keeper no chance

Grego-Cox was denied by a brave stop from Joshua Tibbetts by his near post on 81 minutes. On 86 minutes the visitors drew themselves level, Jack ROBINSON squeezing a shot into the back of the net from an acute angle.  Moments later and the Hoops were back in front, Ebere EZE firing home from close-range after a low centre from Sylla.

Philips was denied by a brave Tibbetts stop on 97 minutes as QPR pressed for a fourth goal. That arrived on 106 minutes as OWENS lashed home from close-range. Tibbets did well to deny the same player moments later as Posh began to tire.