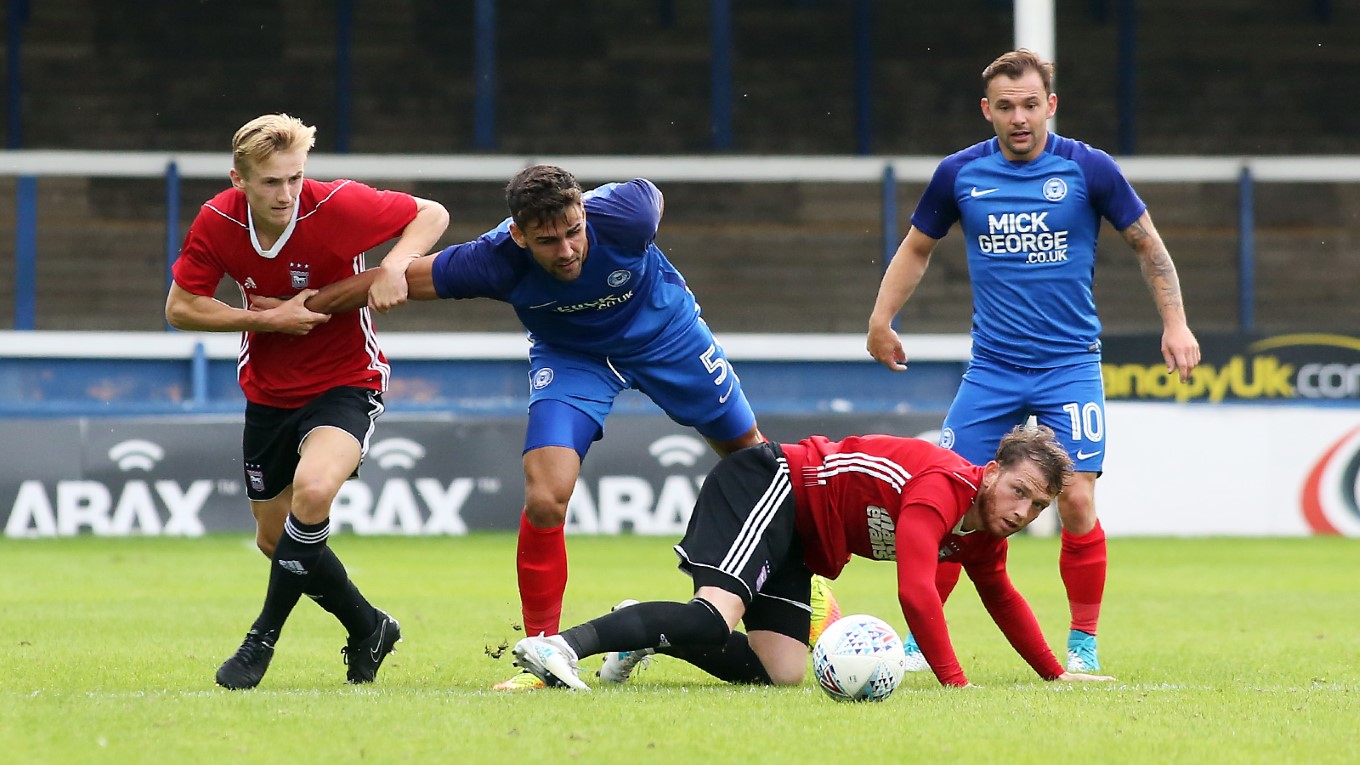 Peterborough United suffered their second defeat in a week to Championship opposition as Mick McCarthy’s slick Ipswich Town side punished some defensive lapses to claim a 3-1 victory at the ABAX Stadium in the latest 120-minute pre-season friendly.

Junior Morias saw a deflected effort from 25-yards fly into the arms of Gerken on five minutes as Posh made a bright start. They got reward for that start on 13 minutes as a wonderful piece of wing play from Gwion Edwards created a six-yard tap in for Jack MARRIOTT who made no mistake against one of his former clubs from six-yards.

Morias had the chance to double the lead on 20 minutes as he shrugged off the attentions of the full-back, but this time the in-form front man took one touch too many as he made his way into the box and the chance was snuffed out.

The Championship side drew themselves level on 22 minutes as experienced front man David McGOLDRICK on his first appearance of pre-season for the Tractor Boys, was in the right place at the right-time to fire past Bond from close-range following a ricochet in the box.

Marriott fired wide after tricking his way into the box on 36 minutes as Posh pushed bodies forward to try and get themselves back in front during the second 30 minute period of the contest. On 41 minutes, Town took the lead as former Preston North End striker Joe GARNER was afforded time and space at the back post to nod past Bond.

Lloyd fired straight at Gerken after linking well with Morias and Marriott as Posh tried to provide an immediate response. On 47 minutes, Town made it 3-1 after a disastrous kick-out from Bond found Celina who exchanged passes with GARNER with the striker then having a simple tap in from three yards.

On 54 minutes, Morias saw an overhead kick gathered by goalkeeper Gerken after Marriott appeared to be shoved in the box as the move developed. A wonderful run and cross from Anderson picked out Marriott moments later, but the former Luton man glanced his header wide.

Spence was in the right place at the right time to clear off the line from Marriott before goalkeeper Bond atoned for his earlier error with a fine stop to deny the rampaging Celina. Tibbetts made a fine stop with his body to deny Ward as he found a lot of space to run into.

Miller fired across goal after a hopeful Cartwright pass picked the former Dover Athletic front man out on 80 minutes. On 92 minutes, McKendry was denied by a fine stop from Tibbetts diving to his right as the final 30 minute period got underway.

Miller fired wide of the near post after being picked out by a delightful Chettle pass on 94 minutes. Harrison Burrows replaced Borg as the average age of the Posh squad was reduced once more as the 16-year-old made his entrance.

Sears clipped a shot into the side-netting moments later after a pass from back to front from the visitors. Patterson was denied by Tibbetts and then stroked an effort wide of the target as the youngster nearly found a fourth goal for Town late on.