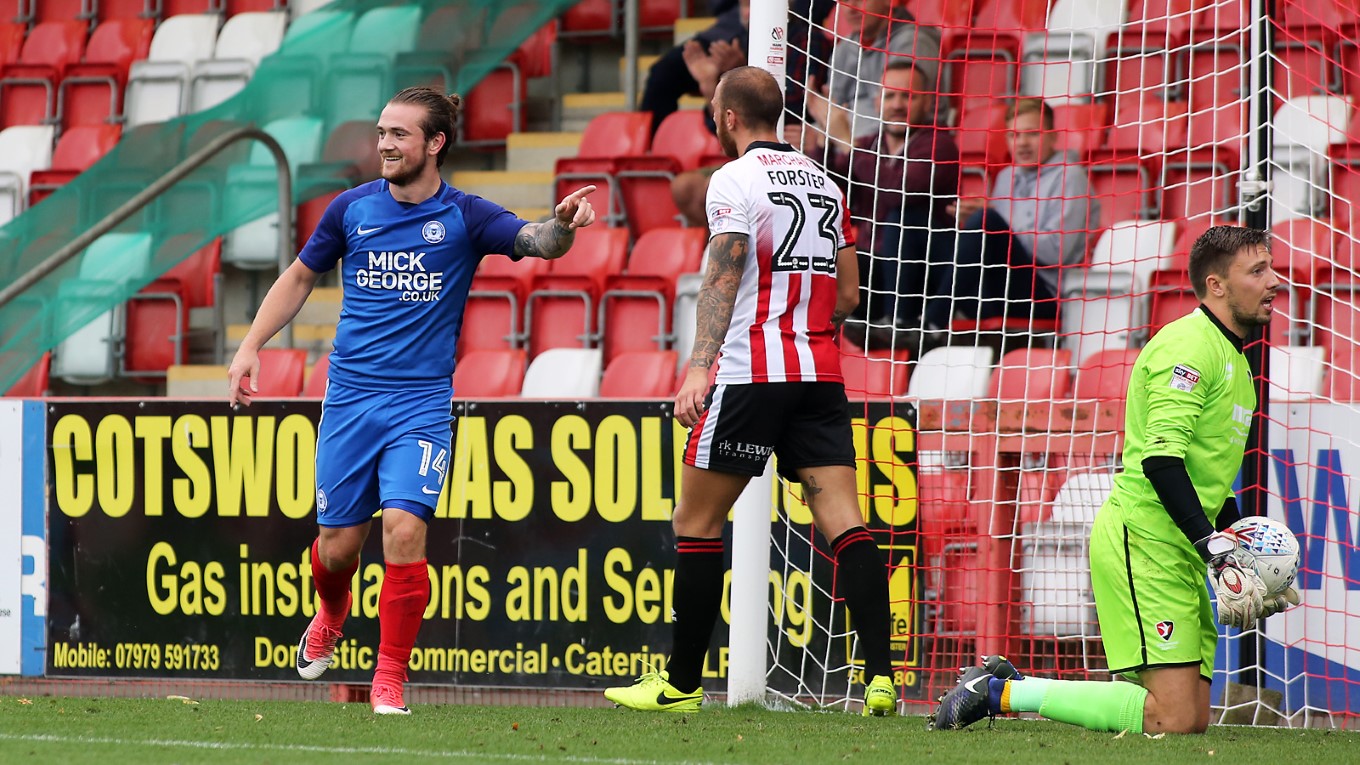 Peterborough United wrapped up their pre-season programme by coming from behind to record a 5-1 victory at Cheltenham Town with former Luton Town front man Jack Marriott netting a hat-trick while Marcus Maddison was in sparkling form, scoring and creating as Gary Johnson’s men couldn’t cope with the attacking prowess.

Ryan Tafazolli headed over from an early Marcus Maddison corner kick as Grant McCann’s men forced the early running on a decent surface at Whaddon Road. Jack Marriott was denied by a fine Flatt stop on six minutes after a good ball forward by Maddison.

Atangana fired over at the other end after a swift Robins counter-attack as the game sprung to life inside 60 seconds. The home side got their noses in front on 12 minutes as a slick move resulted in a foul by Baldwin on Eisa, Dan HOLMAN coolly converting the spot-kick.

Posh and Baldwin were penalised again on 22 minutes as Eisa took a tumble in the box, after consultation with the assistant referee, the official Mr Hooper pointed to the spot. Again Holman stepped up to take it, but this time, Jonathan Bond made a fine stop diving to his right.

Junior Morias planted a header wide of the target after fine work from Maddison on 23 minutes as Posh continued to carve out opportunities in front of goal. Morias and Marriott both had half chances, the latter seeing a cross-shot blocked by Storer.

Bond did well to gather a curling effort from Holman on the half hour mark. Posh levelled the scores on 42 minutes as a wonderful piece of hold up play and skill from Junior Morias saw him turn his man and his deflected effort was parried by Flatt into the path of Jack MARRIOTT who made no mistake from close-range.

Doughty then fired wide with his left foot as Posh tried to turn the game on its head within 60 seconds. Edwards saw a header cleared off the line by Grimes and then Tafazolli headed over as Posh piled on the pressure. At the interval, Posh made a change with Chris Forrester replacing Grant, who was in the wars in that first period.

Doughty was a whisker away from putting Posh ahead on 54 minutes after collecting a short corner from Maddison, the former QPR man curling inches past the far upright with his left-foot from around 25-yards. Doughty had another go moments later, again he failed to hit the target after good work from Edwards and Morias.

Posh got themselves ahead for the first time in the friendly just on the hour mark, a slick move with substitute Chris Forrester feeding MADDISON who calmly rolled home with his left-foot past the keeper.

Andrew Hughes and Alex Penny replaced Taylor and Da Silva Lopes moments later as Posh reverted to a back four. Maddison side-footed wide after racing onto a perfectly timed Marriott pass on 71 minutes.

Posh finally got the third goal they deserved on 72 minutes and what a goal it was. An outrageous pass from Maddison picked out Morias and his low centre was converted from close-range by MARRIOTT for his second goal of the game.

The former Luton man completed his hat-trick on 81 minutes, racing on to a clipped pass forward and MARRIOTT showed strength to hold off the defender before drilling the ball past goalkeeper Flatt.

In the dying moments, Posh made it 5-1 as an in-swinging free-kick from Maddison was glanced past his own keeper under pressure from Danny Lloyd by Grimes.