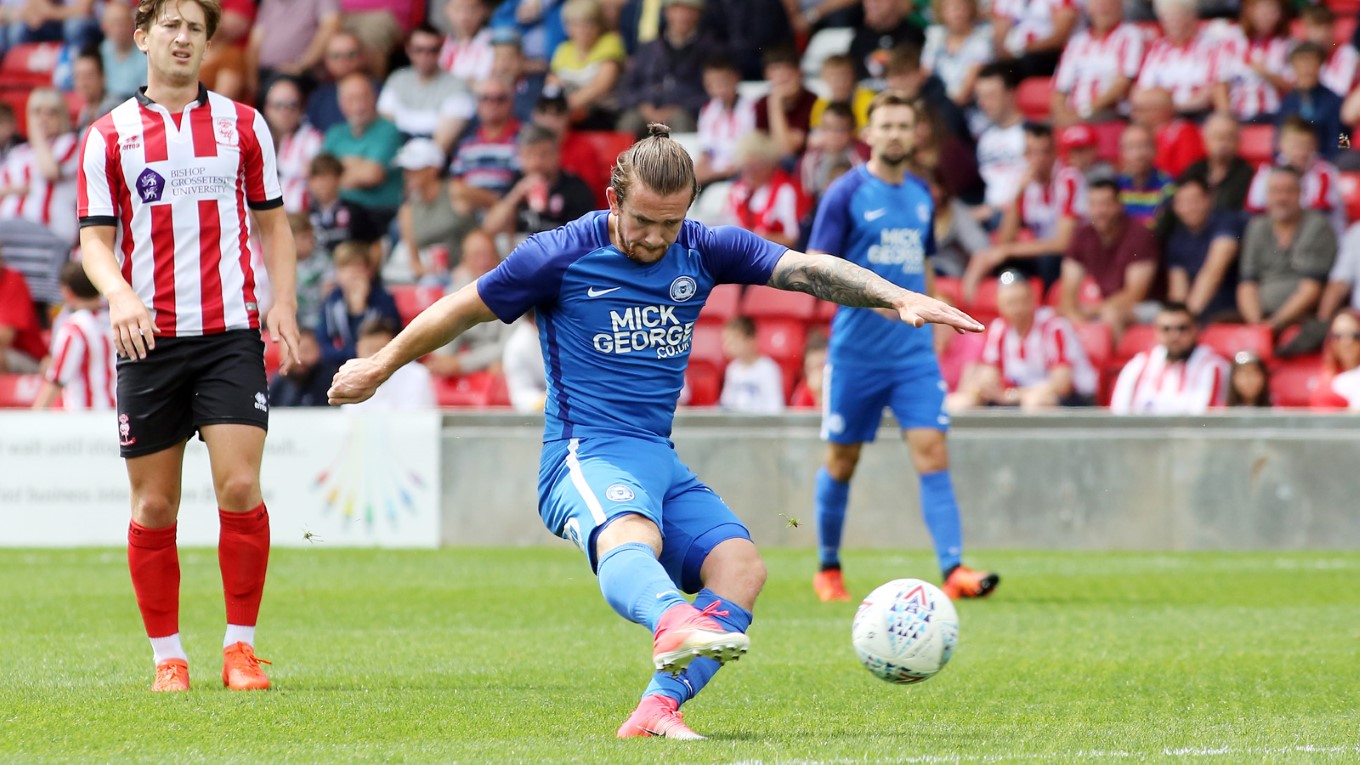 Marriott At The Double In Posh Win

Peterborough United recorded a 3-2 victory at Sky Bet League Two side Lincoln City in the latest pre-season friendly with former Luton Town front man Jack Marriott bagging a superb brace to stake his claim for a starting berth on the opening day of the season when Plymouth Argyle visit the ABAX Stadium on 5th August.

It was a lively opening to the pre-season friendly at Sincil Bank with the Imps forcing a couple of corners inside the first two minutes, but it was on  the counter attack that yielded the first attempt on goal, Marcus Maddison cutting inside onto his right-foot, only to see his low shot saved by Farman.

The deadlock was broken soon afterwards though, a wonderful Maddison corner kick tapped home at the back post by Gwion EDWARDS. Green fired wide from 20-yards at the other end, before Posh doubled their lead as Jack MARRIOTT fired home from 25-yards via the inside of the post.

The home side reduced the arrears with a controversial goal, Matt Rhead planting a header from a deep cross back across goal and GREEN who got away with a pretty blatant shove on goalkeeper Bond, stuck out a leg to divert the ball into the back of the net.

Bond denied Knott’s curler from distance before a delicate chip from Maddison was plucked out of the air by Farman after a swift counter attack. Morias was then a whisker away from extending the advantage after powering into the box and firing a left-footed effort towards goal.

Morias then toe-poked wide via the aid of a deflection following good work from Maddison before Marriott fired straight at Farman from the edge of the box. On the stroke of half-time, Maddison sent a curler inches past the far post after good work from Da Silva Lopes.

Da Silva Lopes fired over from 30-yards as Posh pressed for a third goal that their performance to date had warranted. Farman did well to push away a deflected Maddison cross moments later after he linked superbly with Edwards.

Raggett saw a looping header nodded behind by Grant before the hosts made several changes with Harry Anderson among those introduced. Anderson was denied a goal against his former club by a smart Bond save, the rebound deflected wide for a corner kick.

Anthony Grant saw a volley clear the crossbar on 69 minutes after Da Silva Lopes had seen his earlier effort blocked. Lincoln drew themselves level against the run of play on 72 minutes as a poor first shot was blocked and substitute GINNELLY was able to somehow squeeze an effort into the bottom corner.

Marriott fired over on the half volley after racing onto a Maddison header as the game entered the final 10 minutes. Posh got their noses in front on 84 minutes and it was another fine finish from the former Luton Town front man Jack MARRIOTT, collecting a Doughty pass and rifling the ball past Farman from the edge of the box.