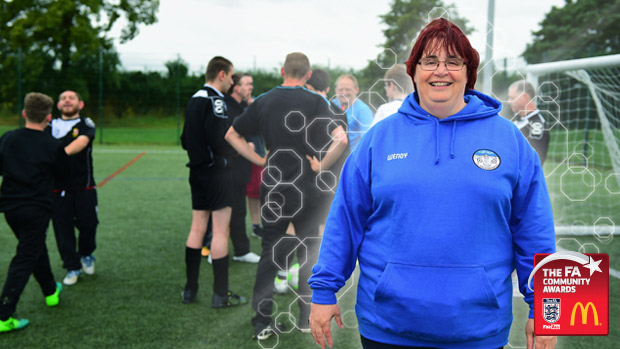 Give Your Vote of Thanks to Wendy

It is with great pleasure that we can announce that Wendy Chambers from St Ives Ranges Colts FC, is one of six people nominated for the 2017 National FA People’s Award for Outstanding Contribution to Football.

The People’s Award is the only national winner voted for by the public, with the voting window open from July 3rd to 30th July. Winners will be announced at this year’s Community Shield.

Known as the Outstanding Contribution award in local and regional rounds it is a very special award that celebrates exceptional volunteering efforts and carries the added prestige of being voted for by the public.

Wendy was nominated by St Ives Ranges Colts for the Hunts FA Community Awards, which she was successful in winning, she was then entered into the East and East Midlands Regional Round, where her commitment to St Ives Rangers Colts and the local game was recognised by the judging panel, which has led us to this moment.

Wendy has been involved with St Ives Rangers Football Club since 2004, only starting because her son’s U9 team needed a manager, she then followed this up with her Level 1 and managed  that team for three years and has never looked back. During her 13 years with the club she has held every position including Manager, Welfare Officer, Treasurer and Club Secretary, each time not only carrying out the duties of that roles but going above and beyond to support other club officials, coaches, parents, players and young leaders to enjoy, start, stay and succeed in local football.

Ensuring that the club, which has 44 teams provides football For All and always strives to be the best club it can be, Wendy in 2007 started helping with the clubs disability teams, picking up players for training and organising taxis and minibus to take players to games at the Cambridgeshire Ability Counts Leagues. Over the years he role has evolved and is now fundraising, applying for bursaries and organising days out, which have included trips to St Georges Park and Peterborough United, with the most recent a trip being to Wembley taking 51 players, careers and family members to watch England. Working with this group of players has become one of her greatest pleasures.

To go with her Level 1, Wendy also holds Futsal Level 1, Welfare Officer and Mentoring Adults Certificates’. She is an active Licensed Coaches Club member keeping her CPD and  qualifications are always in date, so she can stand in for any manager when needed, regardless of the club. This became of use in 2015/16 season when another club in the area, lost two managers and whilst the club organised new managers, she stepped in, organised the games and managed the teams on match days. One of those teams won the Huntingdonshire Mini-Soccer Leagues’ fair play this season.

As well as here work with St Ives Rangers Colts Wendy is has been part of the Hunts Youth League since 2010, as the Assistant Welfare Officer and can often be seen at various games each weekends and at League Cup Finals. In 2013 She became the Registration Secretary for the Huntingdonshire Mini-Soccer League and also attends at least one game a week, she also updates the Leagues handbook and App each season, as well as help to organise the cup finals and write the programs.

Football is not only Wendy’s passion she also finds time to assist with the local swimming club, completing the weekly paperwork, which includes tracking each child’s progression, organising volunteers as well as being a Level 2 qualified teacher, taking session on a Friday evening and Sunday afternoon.

I am asking if you can join me in thanking Wendy for all the work that she does for football as a volunteer, but to also vote for her in this National Round of Outstanding Contribution to Football.  We all know that Wendy is always willing to support everyone where and when ever she can and never seeks an reward for the work she does, which benefits so many different people.

You can vote for Wendy here: www.thefa.com/peoplesaward2017 and please pass this email to everyone within your club, organisation as well as friends and family. You will need your FAN number and Password to vote. This is the People’s Award and the more votes the better. If anyone has any problems with voting please contact us here at Hunts FA.