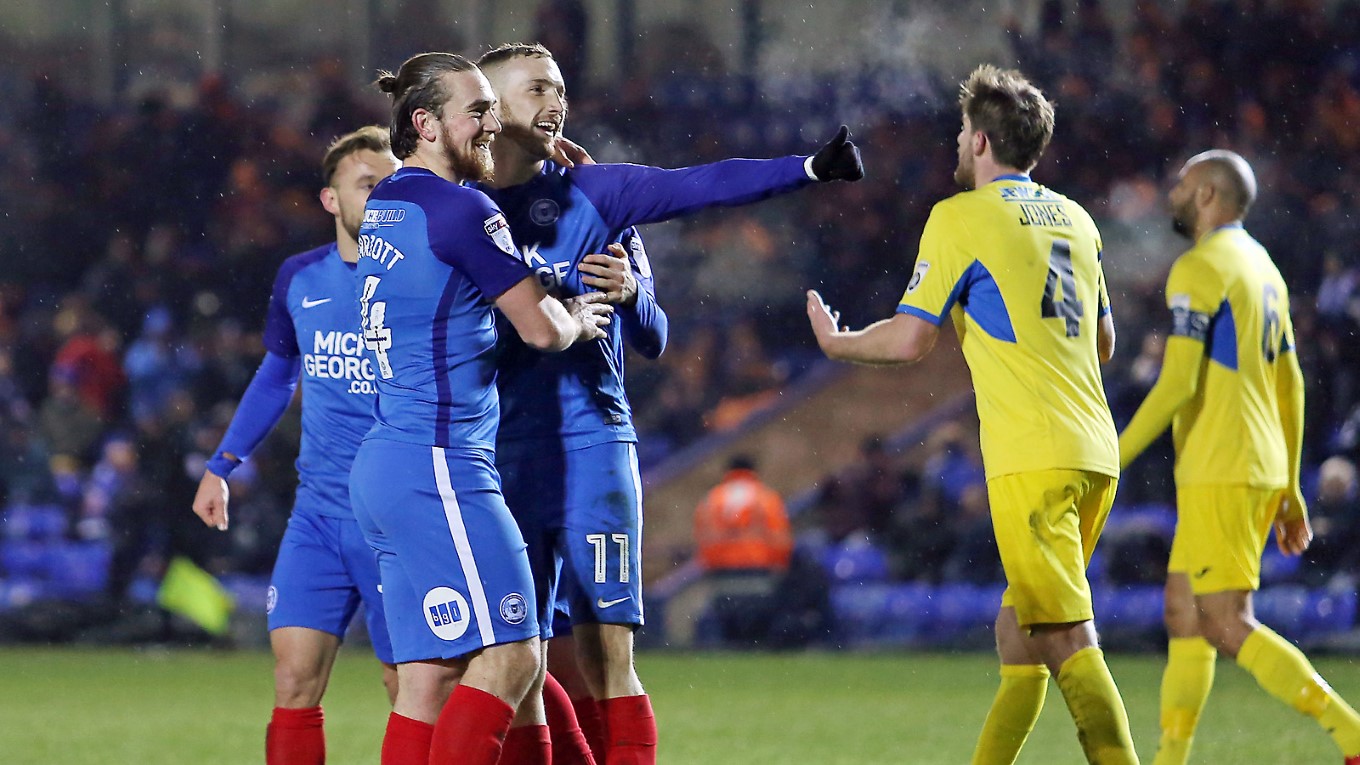 Match report for Peterborough United vs Woking on 12 Dec 17

Peterborough United can look forward to a third round tie at Villa Park against Steve Bruce’s Aston Villa after a 5-2 victory over National League side Woking at the ABAX Stadium in a pulsating encounter on a freezing evening.

Michael Doughty saw an early header comfortably gathered by keeper Nathan Baxter after he was picked out by a teasing Marcus Maddison delivery. Bond made a fine stop to deny Baxter before a wonderful block from Taylor kept out the rebound as the visitors created a clear opportunity on goal on 10 minutes.

Da Silva Lopes slipped whilst in a decent position at the other end after a scuffed Maddison shot fell kindly into his path. Saraiva saw a curling free-kick routinely saved by Bond after Grant had been adjudged to have felled his man following an aerial challenge.

The deadlock was broken on 18 minutes and you have to give credit where it is due, powerful striker EFFIONG turning his man on the edge of the area and curling a fine left-footed effort past Bond and into the bottom corner. Bond got a hand to it but couldn’t keep the effort out to launch pandemonium in the away end.

Maddison was a whisker away from levelling the scores moments later after being picked out by a searching Da Silva Lopes pass, the winger firing wide of the far post with his right-foot. Posh drew themselves level on the half hour mark, a fine cross-field pass from Maddison picked out Edwards who in turn laid it on a plate for the onrushing DOUGHTY who swept the ball into the bottom corner.

Marriott was then denied by a good Baxter stop after a decent interlink on the edge of the box. Penny saw a left-footed effort well gathered by Baxter on 37 minutes after he did well to dispossess his man over on the far side.

Marriott should have made it 16 for the season after being picked out by a sublime Doughty pass, but the former Luton Town man saw his low effort saved by the legs of the advancing Baxter. Posh got their noses in front on the stroke of half-time as excellent work from Edwards down the left saw his teasing cross reach MARRIOTT at the back post and he improvised to loop the ball into the back of the net.

Marriott had another chance in a one v one situation on 47 minutes after being picked out by Maddison but again keeper Baxter won the battle, diving to his left to keep out the effort. Grant McCann made his first change on the hour mark with Danny Lloyd replacing Da Silva Lopes.

Posh had the ball in the back of the net on 66 minutes through a Maddison close-range effort from a Penny cross but the offside flag was up and the goal was chalked off. Moments later and Woking were level, substitute YOUNG firing across Bond into the far corner.

However, the lead didn’t last long, Maddison feeding MARRIOTT and he fired past goalkeeper Baxter at his near post for his 17th goal of the season. Maddison was then a whisker away from making it 4-2 after collecting a Penny pass, his left-footed effort inches past the far post from 25-yards.

Substitute Danny Lloyd won a spot-kick with a fine effort of persistence on 77 minutes, eventually bundled over by Orlu in the box. Marcus MADDISON stepped up and coolly converted the spot-kick with the keeper not even bothering to move.

Marriott was denied his hat-trick by another good Baxter stop before Lloyd saw the follow up shot cleared off the line superbly by Jones. Wynter struck the post in stoppage time with a glancing header after a quickly taken corner kick.

Marriott had another chance deep into stoppage time but again Baxter stood up tall to deny him. From the resulting corner kick, Posh made it five as EDWARDS swept home at the near post from a wonderful Lloyd delivery.