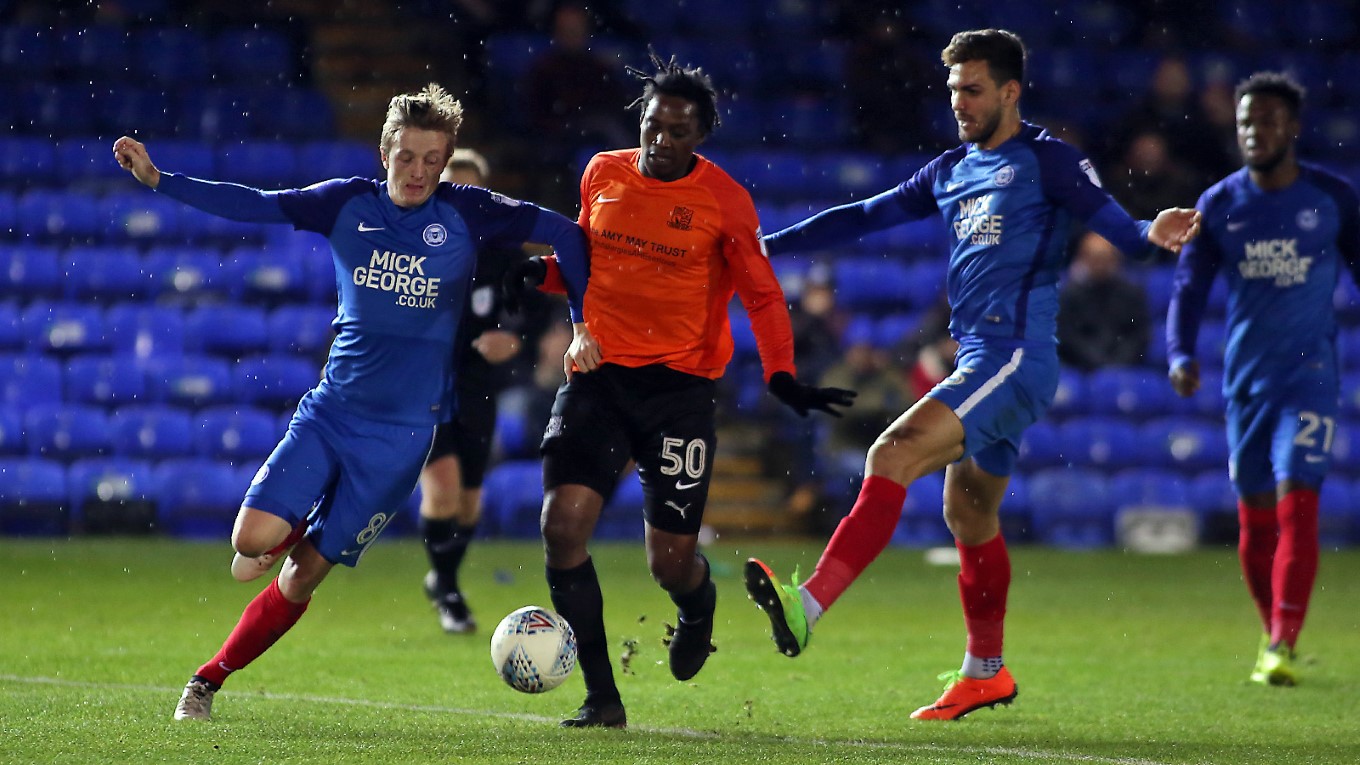 Posh suffer injuries but are through to the next round of the competition after a 2-0 win over Southend United.

Peterborough United are into the next round of the Checkatrade Trophy after a 2-0 victory over Southend United at the ABAX Stadium following an eventful contest, which also saw Leo Da Silva Lopes and Ryan Tafazolli not complete the full 90 minutes due to injuries.

Michael Timlin fired wide of the far post on six minutes after a bright start in more ways than one from the visitors, who were sporting a rather fetching orange away strip for the occasion. McGlashan then tested Bond with a crisp low shot, the keeper doing well by his near post to gather as the effort came through the crowd.

Marriott fired wide with the aid of a deflection and was nearly found by the marauding and determined Penny, who rode two challenges to burst into the area after a strong run. The deadlock was broken on 17 minutes and it was superb pace from Gwion EDWARDS to race onto a ball forward from Maddison and he stayed calm and composed to slot the ball into the bottom corner.

Maddison was denied by keeper Oxley on 22 minutes after collecting a pass from Anderson and catching the defender out by going onto his right hand side, Forrester saw the tame rebound gathered by the keeper.

Bond made a stupendous stop to tip a fierce drive from Demetriou around the post moments later as the Shrimpers pressed. Anderson missed a good chance to double the lead on the half hour mark after Maddison and Marriott linked well to create the opportunity.

Edwards fired over from 25-yards after being picked out by Tafazolli on 32 minutes. There were two minutes of added time signalled by the fourth official but nothing occurred during that period of time.

Oxley produced a fine stop to divert a Marriott volley onto the inside of the post on 53 minutes after a good flick on from Edwards. Anderson had the ball in the back of the net with a deft header less than 60 seconds later from a glorious Maddison cross, but the offside flag curtailed any celebration.

Edwards curled over ambitiously from the edge of the box after linking with Marriott although the latter wanted a pass himself. Josh Wright cracked a header against a post or Southend on the hour mark as Southend came close to a leveller.

Posh doubled the lead on 62 minutes and it was a fine goal, Edwards went on a slalom run and beat two defenders in the process before picking out MADDISON, he ran at pace at the full-back, dragged the ball onto his right-foot and fired low across keeper Oxley.

Maddison was denied a wonderful free-kick by a fine stop by Oxley, who was at full stretch to deny the magic man. Edwards then saw a header tipped around the post by the keeper who was then relying on Hendrie to clear off the line to deny Edwards another header.

Posh made a double change on 71 minutes with Marriott and Edwards replaced by Ricky Miller and Idris Kanu. Danny Lloyd replaced Maddison soon afterwards before Robinson lofted a left-footed shot over the bar.

Miller was cautioned for a crunching tackle by referee Mr Busby on 81 minutes. Kanu followed him into the book for delaying the taking of a set-piece. Forrester was then booked for tugging back Ranger despite the fact he was fouled in the first place.

Robinson fired into the side-netting on 86 minutes as Posh lost Da Silva Lopes to injury and then Tafazolli was stretchered off with what looked a serious injury as eight minutes of added time was indicated by the fourth official.

Bond made a fine stop to deny a low effort from Timlin before Ranger cracked the rebound against the underside of the crossbar. Even with nine men, Posh created a chance for a third goal but Lloyd dragged his shot wide after being picked out by Miller.