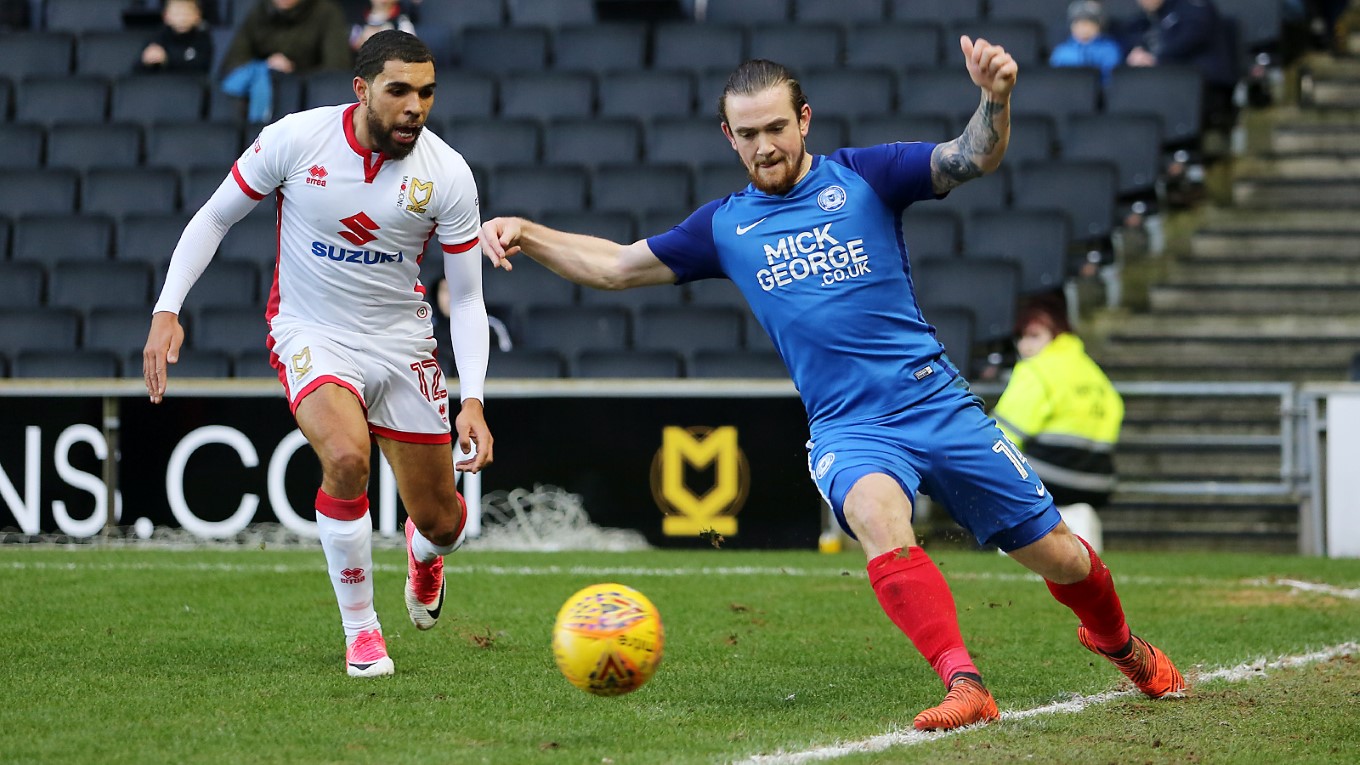 Posh fail to break down defensive unit of Dons and slip to first defeat in four at stadium: mk

The nine men of Milton Keynes Dons held on for all three points against an out of sorts Peterborough United who couldn’t break down the stubborn rear-guard and were undone by a first half strike from the impressive Chuks Aneke.

The Dons were reduced to 10-men after just nine minutes, Joe Walsh shown a straight red card for an obvious foul on Jack Marriott following a raking pass from deep by Andrew Hughes. Marriott curled the resulting free-kick over the crossbar from 25-yards.

Ebanks-Landell fired wide following a half-cleared corner kick on 11 minutes for the Dons. Forrester was cautioned for a foul moments later following an impressive Sow turn. Pawlett squandered a fine chance to give the Dons the lead on 17 minutes after bursting into the box, but his effort was skied over the crossbar.

Bond produced a fine double stop to keep out Sow and then Aneke as the Dons continued to create chances in front of goal. The home side got their noses in front on 26 minutes as a short corner was worked to ANEKE who turned his man and via the aid of a deflection wrong-footed Bond and the ball nestled in the net.

Grant side-footed wide on the half hour after a Maddison free-kick was only half cleared. The Dons were reduced to nine men on 33 minutes as Sow was shown a straight red card for a high boot on Tafazolli.

Grant McCann made a change moments later with Junior Morias making his return from injury to replace Penny as Posh went to three at the back. Doughty sent a curler from distance wide of the target on 40 minutes after a spell of possession for Posh.

Three minutes of added time was indicated by the fourth official which passed without incident. Posh made a change at the break with Leo Da Silva Lopes replacing Forrester in midfield. Grant blazed over a presentable shooting opportunity from 20-yards on 48 minutes after Maddison’s cross was stabbed clear.

Tafazolli was cautioned for bringing down the powerful Aneke on 50 minutes after he went on a mazy and strong run from deep. Hughes nodded a Maddison corner kick over the bar on 54 minutes as Posh tried to get themselves level.

Nicholls produced a decent stop to deny Lloyd on 57 minutes after a swift Posh counter-attack, Marriott feeding the in-form winger, but he can’t get his shot past the keeper. Maddison was then denied by Nicholls who pushed a curling 30-yard effort around the post as the hour mark arrived.

Marriott was next to be denied by the keeper after being played in by Maddison before Lloyd sent a bobbly shot just wide. Jermaine Anderson replaced Doughty in the final Posh change of the afternoon.

Tafazolli fired straight at Nicholls on 71 minutes from the edge of the box after being picked out by Lloyd as Posh piled bodies forward. Maddison cracked the crossbar after a deflected cross rebounded into his path around 10-yards from goal.

Maddison fired wide of the near post from 25-yards as Dons again took the opportunity to do a bit of time wasting. Tafazolli saw a header saved by Nicholls after an up and under in his own box by Williams. Maddison was denied by a fine Nicholls save and then fired wide from right on the edge of the area.

Nine minutes of added time was indicated by the fourth official but Posh were still struggling to create anything of note. Agard fired wide of the near post in stoppage time.