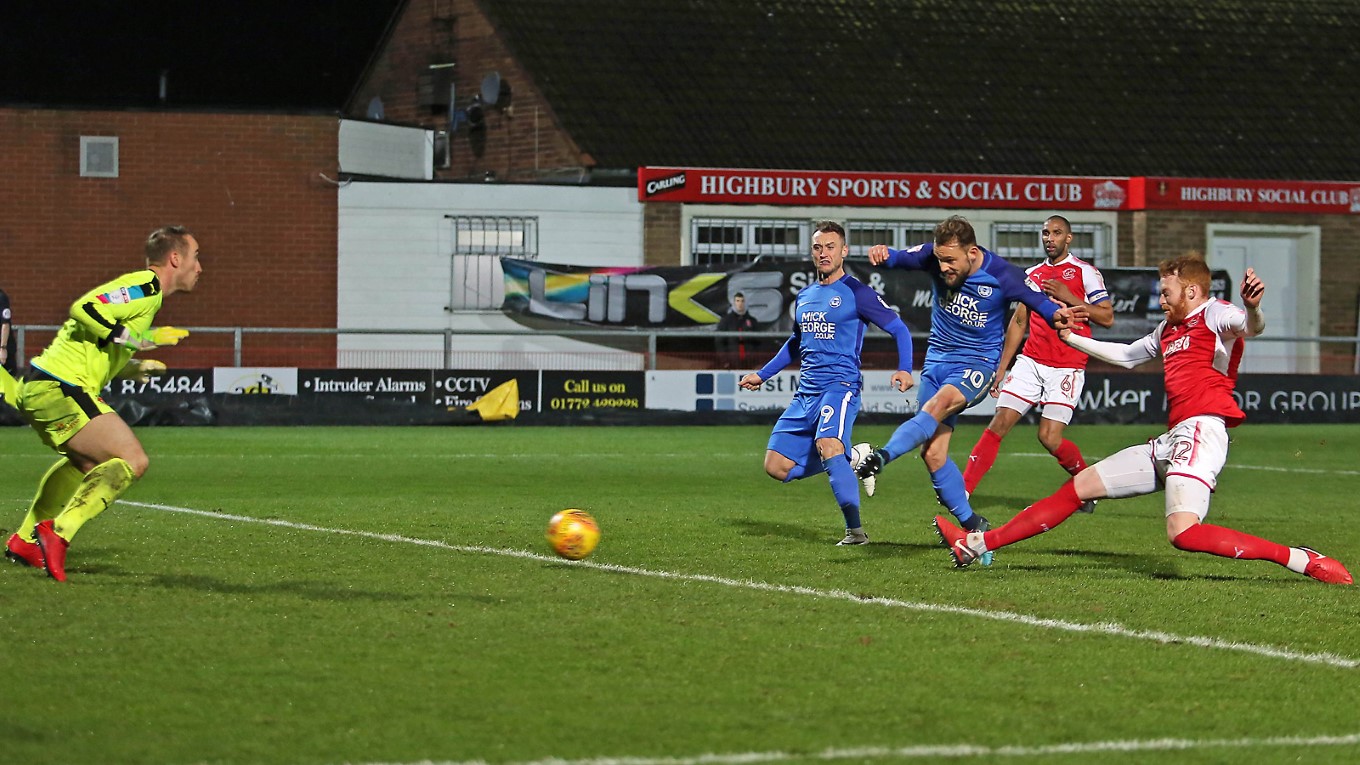 Wonderful threee points for Posh after fighting performance at Highbury against Fleetwood Town.

Peterborough United secured an unlikely three points as Grant McCann’s men came from 1-0 down and 2-1 down to score twice in the last three minutes to earn a remarkable 3-2 victory at Fleetwood Town and despite some scary moments at the back at times, Posh held on for back to back wins for the first time since the end of August in all competitions.

Posh were dealt a huge blow inside the opening few minutes with Gwion Edwards struggling with a foot injury. Danny Lloyd was his replacement as Grant McCann was forced into a very early change. Lloyd made a busy introduction and after seeing an initial shot blocked, he toe-poked wide on the volley from around the penalty spot after Marriott’s cross was only half cleared.

Tafazolli sent a downward header straight into the arms of Cairns on 25 minutes before Marriott fired wide of the near upright with a shot from a tight angle. The deadlock was broken on 28 minutes as Posh were punished for a series of errors, Penny lost the ball on the half-way line, the hosts were stronger in the tackle and then a weak Tafazolli clearance was straight into the path of BELL who drove low into the bottom corner.

Maddison saw a free-kick well claimed by keeper Cairns after Da Silva Lopes had been upended around 30-yards from goal. Cole fired wide on the turn on 35 minutes after Taylor could only prod clear a cross from the right.

O’Neill was cautioned for a poor foul on Lloyd on 37 minutes. Marriott saw a shot deflect wide for a corner kick before Tafazolli nodded the set-piece across goal. Posh wanted a spot-kick on 41 minutes as Lloyd took a tumble in the box, but referee Anthony Backhouse waved away the claims.

Dempsey saw a 25-yard effort gathered by Bond after Penny was dispossessed. Three minutes of added time was signalled by the fourth official, but nothing of note occurred. On 55 minutes, Posh levelled the scores and it was two in two for Michael DOUGHTY who nodded into the net from a wonderful cross into the box from Maddison.

Jermaine Anderson replaced Da Silva Lopes in the second change of the game made by manager McCann. Posh should have had a penalty on 64 minutes as Glendon clearly took down Lloyd in the box, but incredibly the referee waved play on. Doughty fired over from long-range on 68 minutes.

Dempsey fired wide of the post from 20-yards as the home side found some space in the middle of the park as we reached the midway point of the second period. Glendon saw a tame effort go straight at Bond as we entered the final 15 minutes

Maddison then clipped the top of the bar with a swerving effort from long-range after finding some space 35-yards from goal. Fleetwood got their noses in front from a set-piece, Bond made a fine save to deny a towering Pond header at the back post and BOLGER was there to rifle home the rebound for his third goal in two games.

Ricky Miller immediately replaced Tafazolli as Posh went three at the back to try and get something from the game. Sowerby struck the crossbar from a free-kick on 85 minutes after Taylor had been penalised for a foul on the edge of the box.

Posh levelled on 87 minutes and it was another fine assist from Maddison, raking pass to MARRIOTT, he took a fine first touch and flicked the ball past the advancing keeper for his 18th goal of a remarkable season.

Incredibly two minutes later, Posh were in front as Maddison’s free-kick from long-range was spilled and LLOYD was there to gobble up the chance to give Posh the lead. Four minutes of added time was indicated by the fourth official.

Cole struck the bar deep into stoppage time with a header as Posh desperately tried to cling on to the points and cling on they did.