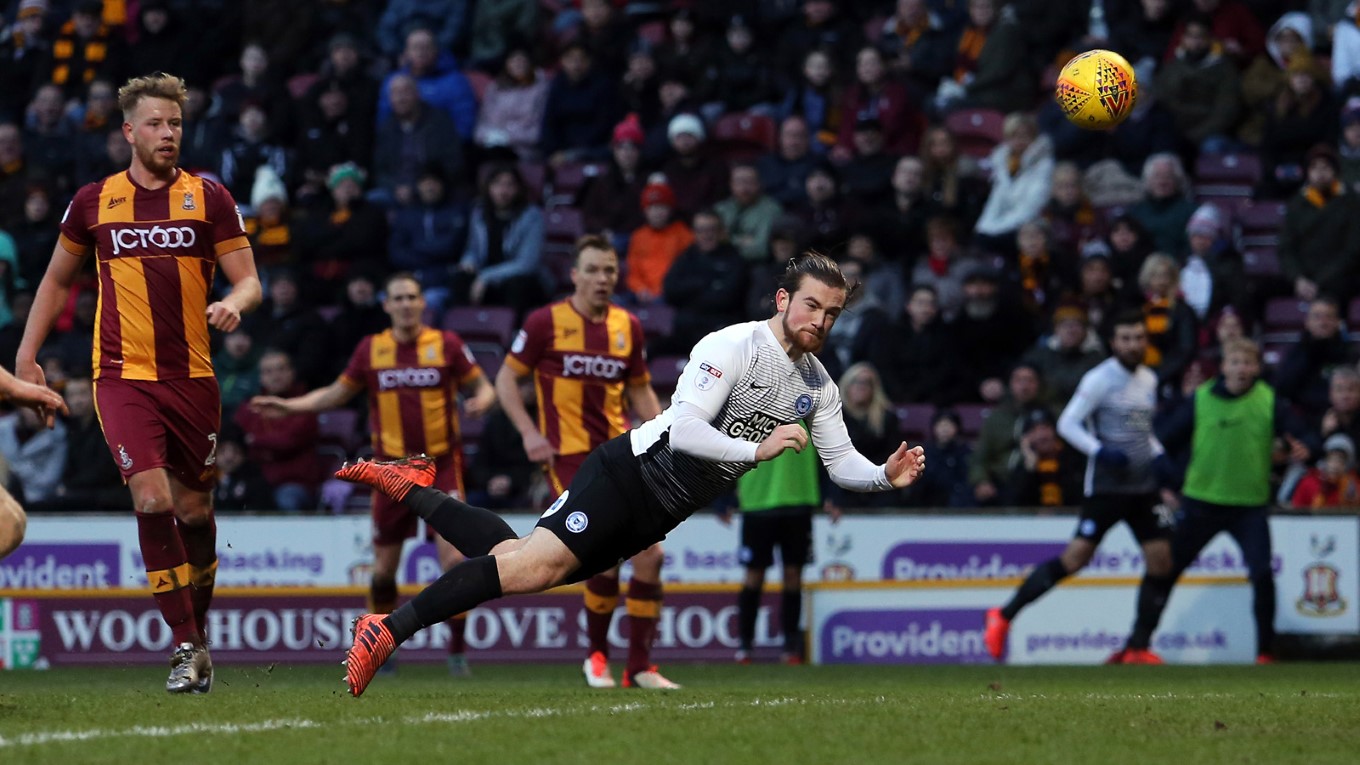 Jack Marriott takes his tally to 21 with wonderful win on the road at fellow promotion hopefuls.

Peterborough United made it three Sky Bet League One wins in a row with a fine 3-1 success at fellow promotion candidates Bradford City as Posh celebrated Boxing Day with a tremendous victory on the road.

After a bright opening, it was Grant McCann’s men who had the first attempt on goal, Danny Lloyd’s left-footed effort parried by keeper Sattelmaier after an intelligent reverse pass from Marcus Maddison. Penny did well at the back post to put off the onrushing Robinson as the Bantams began to settle.

Marriott saw a shot blocked and then he was denied the breakthrough by a fine stop from the onrushing Sattelmaier after a wonderful flick from Doughty. The goal did arrive on 14 minutes though, Marriott heading into the path of the in-form LLOYD and he made no mistake, drilling low into the bottom corner with his left-foot.

Lloyd cracked the outside of the post following a fine run in the left hand channel on 25 minutes after Grant picked him out. Meanwhile at the other end, Paul Taylor saw a curling effort drift just wide of the post after a forceful run from midfield.

Posh were breaking at pace moments later after a wonderful piece of individual skill from Forrester, who then picked out Marriott on the edge of the box, his effort was blocked and Lloyd dragged his right-foot shot wide with Doughty screaming for the pass.

Vincelot planted a header wide from a McMahon free-kick on 30 minutes after Penny had been adjudged to have felled Taylor by the touchline. On 32 minutes, Posh doubled their lead and no surprise that it was Maddison and MARRIOTT working in tandem once again, Maddison with an inch-perfect cross right onto the head of the striker who buried his 20th goal of the season.

Maddison was booked for dissent on 35 minutes by referee Mr Handley. Doughty fired wide from 25-yards after a smart turn on 42 minutes. Tafazolli was cautioned for a high boot moments later on Thompson. flicked a McMahon free-kick wide of the far post from the resulting set-piece.

Bradford made a double change at the break with Dieng and McCartan introduced in place of Thompson and Hendrie. Maddison picked out Lloyd with a fine half-volley pass on 47 minutes, but keeper Sattelmaier did well to deny the former Stockport man.

Substitute McCartan saw a low shot well gathered by Bond diving to his right at the other end. Bond produced a fine stop with his leg to divert a side-footed Robinson effort over the bar after the referee failed to spot a quite obvious foul on Grant in the build-up.

Penny was cautioned for a crunching tackle by the touch-line with Dieng heading the resulting free-kick over the bar. Vincelot headed a corner from McMahon over the bar on 57 minutes after the referee had given a corner for a quite blatant header wide by the same Bantams player.

Posh made it 3-0 on 66 minutes and it was another superb goal, Maddison with a fine pass and a delicate lob from MARRIOTT over the advancing keeper and into the back of the net. That is 21 for the season for Marriott and I make it about 23 assists for Maddison. Incredible.

Bond did well to gather a deflected Taylor shot from 20-yards on 72 minutes. Dieng headed over from a McMahon free-kick on 74 minutes. Robinson skied a shot after cutting inside into the box on 75 minutes as Posh readied a substitute.

Posh made their first change on 78 minutes with Leo Da Silva Lopes replacing Lloyd. Bradford pulled a goal back on 83 minutes and it was a superb strike in fairness from former Posh starlet Paul TAYLOR who rifled a shot into the top corner.