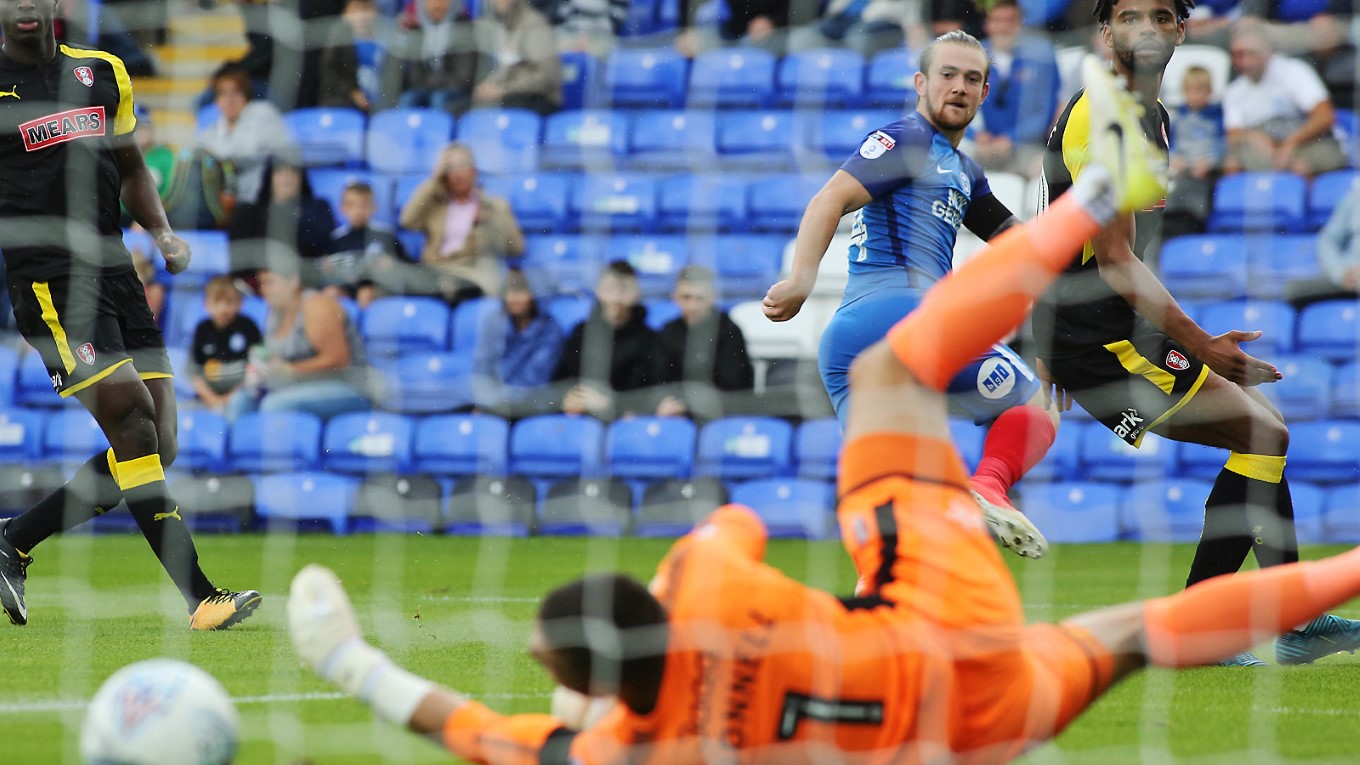 Jack Marriott bagged a brace of goals to take is tally to five in two games as Peterborough United made it three victories from three in Sky Bet League One action following a battling 2-1 success over Rotherham United at the ABAX Stadium.

Jack Marriott lifted an effort over the bar on three minutes after good work from Gwion Edwards down the left hand side. Joe Newell, returning to the ABAX Stadium for the first time after departing a number of years ago, lifted a free-kick over the bar from 25-yards after a foul was committed in a dangerous area.

Posh were a whisker away from the breakthrough on six minutes, a fine pass from Grant picked out Marriott who saw a volley crash against the underside of the crossbar and clear. Marriott was close to a goal on 23 minutes as his left-footed cleared the bar.

Jonathan Bond then produced a heroic double stop to deny Moore and then Proctor before Moore struck the inside of the post before the ball was hacked to safety. An incredible piece of action with the Posh shot-stopper the hero.

Grant sliced a half-volley wide of the target on the half hour mark after a teasing Maddison centre was only half-cleared. Posh produced a superb bit of play on 37 minutes as Morias and Da Silva Lopes combined, the latter showed some good skill to beat his man and was then denied by a brave stop from O’Donnell.

The deadlock was broken moments after the re-start and it was another strike from Jack MARRIOTT – the former Luton man firing low across O’Donnell who could only get a hand to it, the ball found the net via the inside of the far post.

Williams curled a shot wide of the target on 52 minutes from the edge of the box after Baldwin had only half-cleared a low cross into the box. The scores were levelled on 55 minutes and fresh from his treble last weekend, Kieffer MOORE leapt highest in the six-yard box and powered a header past Bond and into the corner.

Morias was denied by a fine stop from O’Donnell by his near post moments later after a sublime through ball from Maddison. Marriott diverted a low Maddison centre onto the post on 65 minutes before Morias rifled a shot over the crossbar.

The Millers then had the ball in the back of the net as a wicked cross from the right was bundled home, but the assistant referee ruled out the effort for offside. Proctor fired wide from 10-yards on the counter-attack for the visitors before both bosses made a change.

Grant McCann’s men got their noses in front again on 75 minutes as a ball over the top looked impossible for MARRIOTT to do anything with, but he used his strength to outmuscle the defender and then produced an impish lob over the keeper.

Frecklington nodded a header wide from a deep Taylor corner kick before McCann made another few changes with Chris Forrester and Andrew Hughes introduced. Marriott curled over from 30-yards on 86 minutes.

O’Donnell did well to beat away a free-kick from substitute Andrew Hughes on 87 minutes after Kanu was upended by Mattock who was booked.